The hosts cruised to victory after England set a competitive 7-269, but that was chased down with consummate ease courtesy of an excellent century from Aaron Finch as they reached the target with 4.2 overs to spare and six wickets in hand.

Finch was outstanding as he compiled his 121 off 128 balls in the chase, making Gary Ballance’s dropped catch at mid-off when the opener was on just seven all the more disastrous.

England won the toss and chose to bat, but Alastair Cook may have regretted the call having not known what would be a good score on the MCG’s drop-in pitch.

It wasn’t all bad news at all though, with their four and five, fifth Test debutant Ballance (79) and Irishman Eoin Morgan (50) performing well, while Ian Bell showed signs of what he’s capable of with 41 at the top of the order.

Cook himself can add another failure to his list of plenty on this tour with just four before falling caught behind to Clint McKay.

The trundling opener took three wickets, all of them in the top four batsmen, and was typically frugal with an economy rate of just 4.4 an over from his 10. 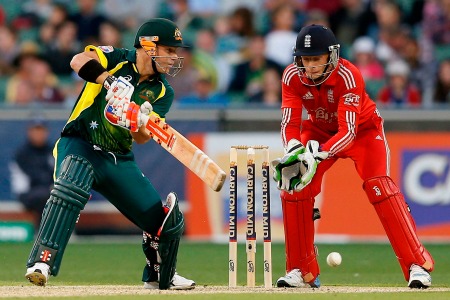 Test hopeful Nathan Coulter-Nile also put in a solid performance with 1-51 from his maximum overs despite copping some stick from swash-buckling keeper-batsman Jos Buttler in the last over.

But Finch and opening partner David Warner took the game away from the outset with a partnership of 163 before Warner (65) tried to hit his old mate Joe Root into the Yarra and holed out to Ben Stokes.

Chris Jordan got reward for a good performance and deserved more than his one wicket, a peach of a delivery which bowled Shane Watson for a second ball duck.

Michael Clarke then came in to steady the innings again and put together a seemingly easy 43 off 42 balls before falling to Tim Bresnan.

Ballance managed to hold onto a catch late in the innings, and it was Finch of course, who went to the bowling of Stokes way after the damage had been done.

George Bailey (17no) and Glenn Maxwell (9no), both capable of tearing world class bowling attacks apart in their own right, finished the job with a minimum of fuss.

London 2012: Are Paralympic athletes self-harming in order to boost their Games performance?

Guide to buying a car or campervan in Australia

Brian Cox swearing VIDEO: the wonders of the solar system