Alongside costumes, models & props from films like the 2017 Wonder Woman, The Dark Knight Trilogy and even the original red cape from Christopher Reeve’s Superman, the exhibition incorporates more than 200 original comic pages, 300 preparatory sketches and concept artworks.

Each room provides a glimpse into the creation of the mythical universe of DC.

The exhibition showcases almost a century of artistic creations that followed the introduction of an innovative new genre imagined by two adolescents from Cleveland, Joe Shuster and Jerry Siegel, the creators of Superman. First introduced in Action Comics #1 in 1938, Superman, the world’s first Super Hero, quickly revolutionised the era, influencing art, literature, fashion, TV and film. 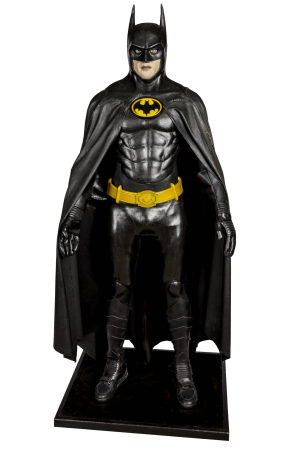 The figurative and narrative strength of DC Super Heroes stems from the fact that their creators didn’t just imagine a genre – they also devised all its elements. Whereas medieval stories, crime novels and westerns all use authentic references from the era, the creators of Super Heroes invented the costumes, settings, and emblems for their characters. The graphics and colour palettes of these new heroes (and their formidable enemies) went on to bring the characters to life and spark the imagination of generations of readers.

The rapid success of Superman quickly inspired other publishers and a young artist by the name of Bob Kane, who along with Bill Finger, created the character of ‘the Bat-Man,’ an extraordinary new hero whose first adventures were featured in a DC (“Detective Comics”) book the following year.

While Superman is a tireless champion dedicated to protecting life and battling injustice with his array of superpowers and abilities, Batman is a mortal man fighting crime using his intellect, physical training, and an arsenal of gadgets and vehicles developed using his vast wealth and resources. They are two opposites – the near-god and simple mortal.

However, this contemporary mythology would not have been complete without the fundamental presence of Wonder Woman, a character who became a trailblazer and symbol for peace, justice and equality. Superman, Batman and Wonder Woman became the foundation for the genre on which all subsequent Super Heroes are based.

All tickets are subject to a booking fee

Tickets are on sale now: www.DCExhibition.co.uk

Spend a day at Thorpe Park for just 12p!