Where to eat: Ye Olde Fighting Cocks
The oldest pub in the country (according to the Guinness Book of Records), Ye Olde Fighting Cocks is a top spot to grab a pint of real ale and tuck into a sumptuous Sunday lunch over the Easter weekend.
The pub’s foundations date back to the 8th century, around 793, but its Sunday lunch is a very 21st-century affair with the finest West Country beef, Devonshire pork and English leg of lamb prepared by head chef, Ian Baulsh, who worked under Michelin Star-winning Andrew McLeish at Chapter One for three years. Veggies are well catered for too with roasted red pepper stuffed with ratatouille and topped with a goats cheese gratin. The real ales on tap are impressive with ales from a number of different breweries include The Chiltern Brewery, the Marlow Brewery, the Buntingford Brewery and the Red Squirrel Brewing Company.
www.yeoldefightingcocks.co.uk

The original hot cross bun
St Albans Cathedral is selling the Alban Bun, (the original Hot Cross Bun), which was created in the city. The spicy Easter cake is said to originate in St Albans, where Brother Thomas Rocliffe, a 14th-century monk at St Albans Abbey, developed an original recipe and distributed the Alban Bun to the local poor on Good Friday, starting in 1381. Food critic Jay Rayner said: “St Albans’ claim to the hot cross bun is the real deal.”
The cathedral is built on the spot in the City that its eponymous son Alban, the first British Christian martyr, was beheaded. Its also the oldest place of Christian worship in the UK and the jewel in St Albans’s crown, as well as being something of a film-star, having featured in many a movie.
Once the most important Cathedral outside London, it is a site of huge historical importance, not least because the first draft of Magna Carta was drawn up here in 1213. It also has the longest nave of any Cathedral in England, which, along with the distinctive Rose window and Norman tower give the Cathedral its individuality.
In recent years, the Cathedral’s Nave has been turned into a cinema to host the opening films of the international St Albans Film Festival.

A Sunday stroll
You have a choice of two places to walk off your roast. Take a stroll around Verulamium Park, the 100-acre city-centre park in St Albans, named after the major pre-Roman city of Verulamium, through which Boudicca was said to have rampaged. Remnants of the City walls, including the entrance to the city itself, can still be seen, as well as Britain’s only surviving Roman Theatre, built around 140AD, and, in the middle of the park an original Roman floor mosaic, with one of the first heating systems to be installed in this country (a hypocaust). Alternatively just outside St Albans is Bluebell Wood, a 45-acre forest of ancient woodland that during the spring has a spectacular carpet of bluebells. The ancient forest is located within the 850-acre Heartwood Forest, which is the Woodland Trust’s flagship site in England. Some 600,000 new trees have been planted, creating the UK’s largest native forest.

Climb the 93 steps to the top of the city’s Clock Tower
Opening on Easter Saturday, it is the only surviving medieval clock tower in England  The tower and its fine bell, right in the centre of the city, has survived over 600 years of use. The view of the City and the surrounding countryside from the top of the clock tower are breath-taking. You have 93 steps to climb to get to the top – but the views are worth it. (Adults £1, children free). 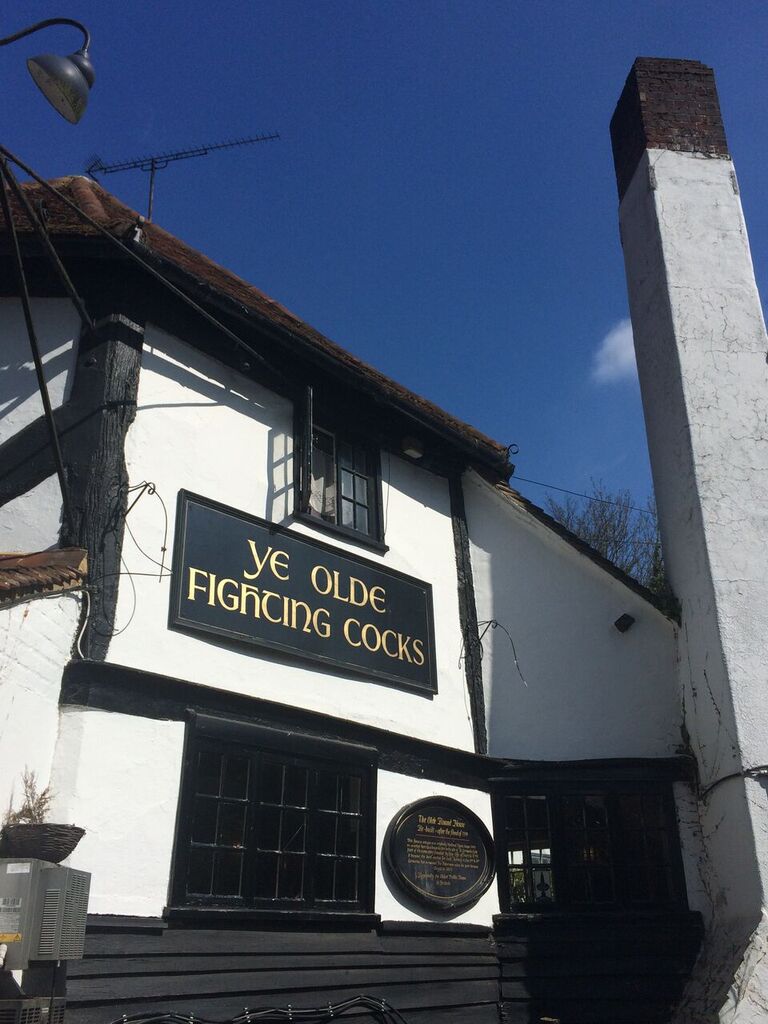 And finally, a few fascinating facts…
St Albans is named after Britain’s first Saint – Alban – and the Cathedral is the oldest place of continual Christian worship in the UK – and has the longest nave of any Cathedral, including St Paul’s and Westminster Abbey.

St Albans has the only medieval clock tower in the country.

St Albans has the oldest public school in Britain where Pope Adrian IV, the only Englishman to occupy the papal chair, and scientist Stephen Hawking were educated.

St Albans’ pub Ye Olde Fighting Cocks is in the Guinness Book of Records as the oldest pub in the country.

St Albans Abbey (now Cathedral) was at one time the principal Abbey in England and was the location of the first meeting (in 1213) which ultimately led to the sealing of the Magna Carta (in 1215).

World-famous heavy rock group Enter Shakari are from St Albans, and still play the odd gig in the city.

St Albans has more pubs per square mile than any other town in the country.

Legendary filmmaker Stanley Kubrick lived and worked in the area and produced The Shining here.

Woman was ‘burnt to death in hospital shower’