WHEN 26–28 May
WHERE Landgraaf, Netherlands
THE VIBE This may be the oldest pop festival in Europe, but there’s definitely life in the old dog yet. Expect three stages and 38 international acts to blow you away.
LINE-UP Bruce Springsteen, Bombay Bicycle Club, Chase And Status, James Morrison.
TICKETS £130

WHEN 1–3 June
WHERE Nurburgring Racetrack, Germany
THE VIBE Along with its sister festival, Rock Im Park, it echoes Reading/Leeds with its sharing of acts. It also boasts some of the heaviest guitar-based music around.
LINE-UP Linkin Park, Soundgarden, Gossip, Metallica, Offspring, Motorhead, Marilyn Manson, and Die Toten Hosen.
TICKETS Sold out

WHEN 26–30 June
WHERE Zagreb, Lake Jarun, Croatia
THE VIBE Held on the stunning Lake Jarun in Zagreb, with some huge acts and a famously friendly crowd, InMusic is bound to impress.
LINE-UP Gogo Bordello, The Cranberries, Franz Ferdinand, Mando Diao, Plan B.
TICKETS £43+

WHEN June 29–July 1
WHERE Zrce Beach, Island of Pag, Croatia
THE VIBE Jump on a boat and party all day or take a swim against the backdrop of some banging bass music.
LINE-UP Annie Mac, Skream & Benga, Lomo Dice, Andy C.
TICKETS £99+

WHEN 4–7 July
WHERE Gdynia, Poland
THE VIBE Boasting modern art, film festivals, a load of gypsy-punk, reggae, indie and drum ‘n’ bass, this thumping festival has something for even the fussy tastes.
LINE-UP Franz Ferdinand, Jamie Woon, Public Enemy.
TICKETS £80

WHEN 5-8 July
WHERE Roskilde, Denmark
THE VIBE It’s been around since 1971 and is the biggest festival in north European culture. Expect 100,000 revellers, performers and artists at this crazy, colourful and open-minded celebration.
LINE-UP Friendly Fires, The Roots, Bruce Springsteen, The Refused, The Cure, Cerebral Ballzy.
TICKETS £198 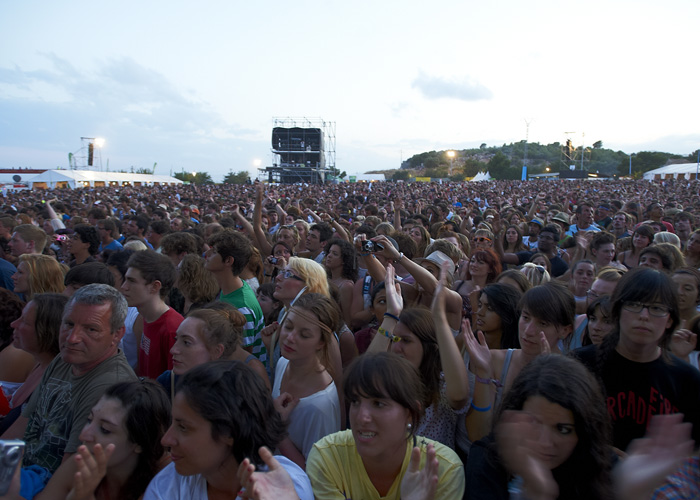 WHEN 12–15 July
WHERE Castellon, Spain
THE VIBE A huge festival popular with the Brits, this year promises no let up in the massive celebration. Expect sun, sea and silliness with this absolute gem of a party, with a top line up of headline acts.
LINE-UP Stone Roses, New Order, Crystal Castles, Noel Gallagher’s High Flying Birds
TICKETS £143.

WHEN 12-16 July
WHERE The Garden, Tisno, Croatia
THE VIBE Dance your socks off to electronic beats while soaking up the rays.
LINE-UP Michael Mayer, Andrew Weatherall, A Love From Outer Space, Justin Robertson.
TICKETS £90+

WHEN 2–6 August
WHERE Petrcane, Croatia
THE VIBE Croatia continues to prove its worth with another stunningly located festival right by the sea. Enjoy fun, frolicking and frying in the sun, with beach sports, music and a top atmosphere.
LINE-UP Lil’ Louis, Jimmy Edgar, Tortured Soul, Chris Coco.
TICKETS £100+

WHEN 6–13 August
WHERE Obudai Island, Budapest, Hungary
THE VIBE It may be held on a small island, but Sziget boasts a stunning location. This rock festival attracts hundreds of thousands of punters to see some of the world’s biggest acts.
LINE-UP Stone Roses, Two Door Cinema Club, Korn, Subways.
TICKETS £99+

WHEN 8–12 August
WHERE Suvilahti former power plant, Helsinki, Finland
THE VIBE A party in a power plant? Judge for yourself, but you can guarantee that what this festival lacks in foliage, it makes up for in energy and effort. With top names and an expanded venue this year, Flow will deliver.
LINE-UP Flying Lotus, Four Tet and Caribou, Bjork, Bobby Womack, Frank Ocean.
TICKETS £110

WHEN 9-11 August
WHERE Goteborg, Sweden
THE VIBE You’ll be grooving away to an eclectic line-up of top acts from electronica, pop and and rock, at this large, international festival.
LINE-UP Blur, Refused, Black Keys.
TICKETS £177 weekends

WHEN 16–18 August
WHERE Kempische Steenweg, Kiewit, Belgium.
THE VIBE Celebrating more than 25 years of full-on festival fun with around 200 acts, across eight stages and some of the biggest bands you will be able to find anywhere on the planet.
LINE-UP Bjork, The Stone Roses, Foo Fighters, Black Keys.
TICKETS TBC

WHEN 5–12 September
WHERE Puerto Plata, Dominican Republic
THE VIBE Held in a plush five-star beach resort, with free drinks and a seven-day relentless festival in the sun, it all looks pretty inviting. Other events include late night raves in a roman amphitheatre and boat parties.
LINE-UP Kenny Dope, Jamie Jones, Dennis Ferrer.
TICKETS £800+

The evolution of the Disney Princess