I’m sitting at a roulette table in the famous Golden Nugget Casino. There are four tall towers of chips rising off the table like sky scrapers. A small crowd has gathered to watch the result. The croupier spins the wheel and then rolls the ball around the track. All I need is black.

The anticipation is unbearable. The ball loses momentum and falls onto the wheel. It bounces around and then eventually settles in its final resting pocket. There is a gasp from the onlookers. My heart sinks. It is red!

It all happened so quickly. Before I knew it Las Vegas had seduced me, sucked me in and bled me dry. I had won and lost my fortune in the blink of an eye. One moment I was on top of the world and the next I was crying in my beer. Like many punters before me, greed was my downfall. Damn you Vegas!

From underground illegal gambling dens to the recent boom of the glitzy mega-resorts, gamblers have always been attracted to Vegas like a moth to light. (And there are plenty of bright lights to be dazzled by.) Even when Nevada outlawed gambling in 1910 it only lasted three weeks. Gamblers quickly set up underground games where patrons who knew the proper password jousted day and night with Lady Luck. Illegal but accepted gambling flourished until 1931 when it was legalised again.

Today, tourists flock to the city not just to gamble, but also for the fantastic entertainment, great restaurants and the chance to drop in on one of the wonders of the natural world. It’s one heck of an adult playground. 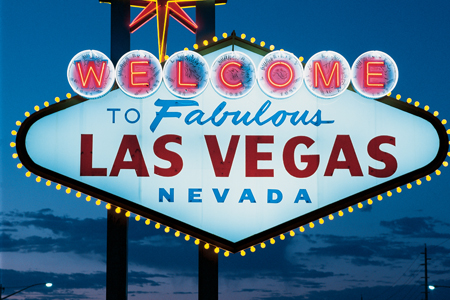 Disappointed with my loss, I reluctantly exit the Golden Nugget and stroll onto Freemont Street. My mood instantly changes. The atmosphere is electric! Freemont Street is home to legendary casinos, free entertainment, old-fashioned gambling hospitality and a great party atmosphere.

On any given night you may see famous bands, strolling showgirls, impersonators or amazing street performers. The most obvious and largest part of the Fremont Street Experience is the Viva Vision canopy and light show. The canopy towers 90 feet above the ground and spans the length of five football fields. The screen contains 12.5 million synchronized LED lamps making its projection surface the largest screen in the world.

Each night on the hour the show features tributes to Bon Jovi, Queen, Kiss and other rock legends. Thrill seekers can breeze right beneath the Viva Vision canopy on a thrilling zip line ride. Before take off, I’m strapped into a harness which is suspended from cable wires. After the count down I launch from the platform and soar underneath the colourful laser light show.

At the bottom of the zip line, I bump into an Elvis busker singing “Viva Las Vegas”. Impersonators are a dime a dozen in the city but this guy had the voice, hair, costume, dance moves and even real side burns to match it with the original Elvis. After his song I flip him a few coins hoping karma may bring some winnings my way. In an authentic Elvis accent he replies, “thank you. Thank you very much. I hope you win your jackpot”. “Thank you. Thank you very much” I respond. “I need all the luck I can get”. 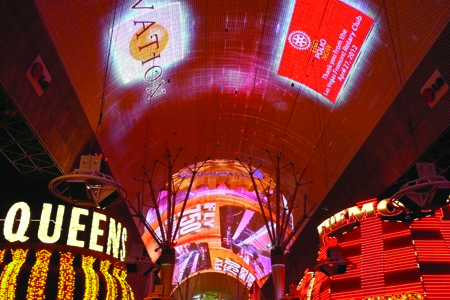 For those (like me) who gamble away their life savings and need to escape the crowds and bright lights, the Grand Canyon is the perfect place to regain your mojo. And best of all there is not a casino in sight.

It’s easy to see why the Canyon is the most popular natural attraction near Vegas. Over 450km long and measuring over a mile deep and almost 30km across in some places, this natural wonder of the world will impress even the most worn-out of travellers.

The rising of the Colorado Plateau combined with six million years of erosion has created one of the planet’s deepest gorges which can be admired from the air (plane and helicopter) or a long drive from ‘the strip’.

Sitting in the comfort of an air-conditioned chopper I enjoy a bird’s eye view of the Hoover Dam, Lake Mead, extinct volcanoes and the Grand Canyon. The sight is difficult to describe without using typical clichés such as spectacular, amazing, stunning, breath taking etc. However, to put it plainly the canyon is simply …well….grand! I’m sure if Mike Tyson visited this wonder during his day he would have easily converted to yoga.

During the flight, the effects of sleep deprivation were taking its toll and I slipped into a number of micro sleeps. I continually nodded off but was awoken each time I head butted the window beside me (much to the amusement of the other passengers). As we disembarked the chopper the pilot reassured me that I was not the first person visiting Vegas to fall asleep during world’s most amazing flight. Sin City was taking its toll. 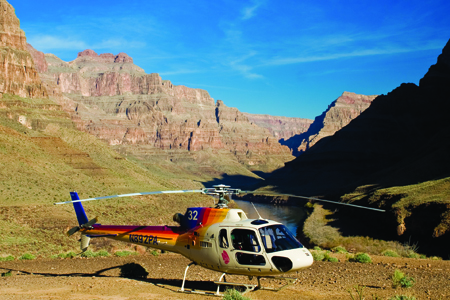 The choice can be overwhelming: magicians, singers, comedians, strippers, live bands, dancers, musicals, circuses. The list of quality performers and entertainers is endless. In the end I decide on a Vegas institution – the celebrated Burlesque show over one of the all time great comedians: Jerry Seinfeld. It wasn’t an easy choice.

The setting for “X Burlesque” is the intimate 180-seat theatre at the Flamingo Casino. Edgy choreography, creative props and six beautiful dancers combine to form one of the sexiest shows on the strip. The show allows for a lot of up-close and personal interaction with the dancers, who venture out into the crowd and perform on a stripper pole in the centre of the room.

There is nearly a riot when the girls, dressed as flirty flight attendants, invite one lucky “passenger” to go on stage and join their “Mile High Club”. Every male in the audience instinctively jumped off their seats hoping to be chosen. To the tune of Lenny Kravitz’s “Fly Away,” the leggy dancers provide the strip tease of the century to the lucky man. The smile on his face said it all – he didn’t need slot machines to win today’s jackpot.

However, when Nancy Ryan the mid-show comic takes to the stage I stop drooling and sink back into my chair, eager not to be targeted by the comedian.  Although, not everybody was going to escape the wrath of Nancy’s jokes. Straight away she began heckling a couple of young men sitting together in the front row.  The verbal onslaught on her targets is brutal and hilarious. I’m glad it was not me. 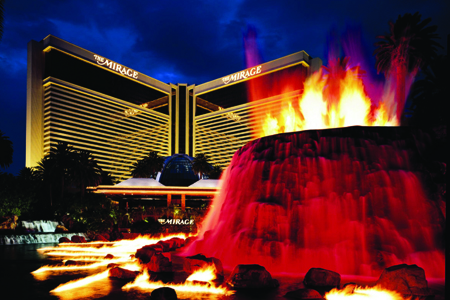 Vegas is more than just gambling, shotgun weddings, neon lights and glamorous showgirls. Believe it or not, it also houses some of the best chefs and restaurants in the world. A Vegas buffet is a great culinary experience for food lovers, so don’t spoil your appetite beforehand. For others it’s a great way to cure a hangover and generally make a pig of yourself.

Whatever cuisine you love, you’ll be able to satisfy your hunger at a variety of award-winning restaurants. Seafood? Yep! Italian? Check! Steak? Indeed! Mexican? Sure! Indian? Of course! You get the picture; there is enough food to feed the US army. Don’t worry if you eyes are bigger than your stomach, just loosen your belt a little.

You can basically eat as much as you like at the very best eateries such as The Spice Market in Planet Hollywood, The BellagioBuffet and Rio’s World Carnival Buffet.

Even ifyou have just one meal per day a Vegas buffet will get you through the night. Everything about Vegas is excessive, so it’s totally acceptable leave the buffet feeling like a beached whale.

On my final morning I literally roll out of bed and land on the floor. Vegas had lived up to every expectation but I was exhausted and I had little memory of the night before. I peer under the bed and see stacks of casino chips scattered about on the floor. Cha-Ching!

After spending days on the tables trying to pile up the pennies I was ultimately in the black. I couldn’t help myself. I dance around and scream the words I had been longing to shout “Winner Winner Chicken Dinner!”