But today things are a little different – we’re about to take part in the world’s most famous food fight. It’s 8am and an already buzzing crowd is pushing its way towards the central square, pints of sangria in hand. In a few hours there’ll be thousands of people crammed into these mean streets, and the early birds are trying to secure a spot near the ‘palo jamon’ (which loosely translates as greasy pole), a huge pole covered with lard, with a ham on top.The tradition is for men, and occasionally women, to climb over each other in an attempt to reach the ham and become the hero, or heroine, of the festival – a near impossible task, but it’s the intention.

The premise of La Tomatina though is incredibly simple, stupidly so: throw, mash, squidge or otherwise propel over-ripe tomatoes at as many of your fellow Tomatinas as possible. As 11am, the official start time, approaches, tensions build.

Despite the fact that massive speakers have been blaring out Spanish pop tracks and everyone has been dancing, drinking and seemingly enjoying life for a few hours, they’re also sinisterly preparing for what’s about to unfold. Then, a cannon explodes and at the end of the packed street massive trucks roll into sight, the facilitators of what’s about to go down.

Somehow managing to navigate through the crowd, with a swoosh a tsunami of juicy tomatoes flood the street, turning the world red in a flash (you say tomato, I say bring it on!). For the next 45 minutes or so, all hell breaks loose, people throwing tomatoes faster than they can think.

“BOOM”, the second cannon is sounded and weapons are laid down. Game over. Euphoric but exhausted and dazed, the crowd, looking like extras from Kill Bill, shuffles home slowly, exchanging laughs while marvelling at the destruction that has befallen this-once sleepy town.

How did it all begin? La Tomatina has gained momentum in Buñol since 1944, but its origins are shrouded in mystery. Some say La Tomatina began with a fight between youths who overturned a vegetable cart, while others claim it started as a way to humiliate a bad musician. Another theory says the residents would throw tomatoes at animals eating their fruit and the fight started when they missed and hit a person. Then there’s the plausible explanation that it started as a political protest against unpopular councilmen. However it originated, after several years of the police putting a halt to the festivities, it’s now an integral part of the town’s calendar and is held on the last Wednesday of August every year.

What to expect: Most people who go to Tomatina stay in Valencia and make the trip by train or with an organised coach tour. The festival used to be a free-for-all, but not an ymore because the town hall couldn’t afford to foot the bill for the truckloads of tomatoes and the police and medical staff needed in case of a tomatoey emergency. Revelers are now required to pay a €10 entrance fee, and only 15,000 tickets are allocated. The fee is worth it though so make sure you get booked in as nowhere else can you spend hours dancing and chanting, drink more sangria than is recommended before 11am and proceed to launch tomatoes at your fellow man before emerging from a crowd of crimson with a big smile on your face. 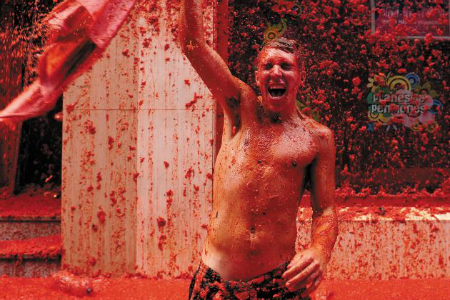 Get in the spirit: Many dress in all white as if to show-off their stains when the carnage ends, but some people have been known to dress up or strip down to their undies – a group of Ninja warriors were spotted a couple of years back, complete with kamikaze headbands, while some have worn Borat-style unitards.The best thing to do is wear something you won’t miss, a naff or old pair of trainers and goggles. You definitely need goggles. People have been known to get black eyes from other objects being flung, such as carrots. Some people just don’t know their veg. And be warned ladies, the odd tosser (literally) has been known to pull off women’s tops. Wear several layers, including a sports bra.

What else? Tomatina aside, nothing much else happens in Buñol, so most festival goers ship in and ship right back out again. They usually head to nearby Valencia, Spain’s third largest city and a rival to the cosmopolitan and cultural centres of Barcelona and Madrid. With a vibrant nightlife, fantastic architecture and a rich heritage, it’s a beautiful place with so much to offer and explore. Valencia boasts fantastic beaches, picturesque landscapes and historic towns. A must-do is the trendy, thriving area of Barrio del Carmen, which has undergone several stages of regeneration and is the place to go to experience the city’s famed nightlife, with loads of restaurants, clubs and open-air drinking spots.

‘Engagement to Mezhgan Hussainy was a big mistake,’ Simon Cowell