Xavi Meroño, founder of the project, says: “We want to raise awareness about the infinite world of paella in the British community in a fun and accessible way. Our classes will provide students with a basic knowledge of paella and give them the tools they need to advance their skills to create more elaborate recipes in an environment of fellowship and teamwork. These values, which are directly related to the tradition of this renowned dish, mean cooking paella in a group is not only a fun way to meet people and learn new skills but is also the perfect activity for team building.”

It is thought that paella is the union of two cultures from Spain – the Romans for the pan ‘patella’ and the Arabs for the rice that they started to cultivate near Valencia in the 10th century. With humble beginnings as farm labourer’s food, when it was cooked by workers over a wood fire at lunch, paella became more elaborate during the 19th century when living conditions throughout the country rose. Ingredients like chicken and rabbit were added, contributing to the infinite number of recipes now available, with variations depending on the area of origin. 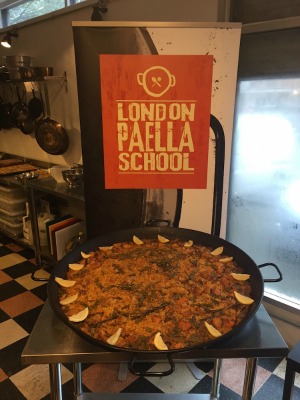 There is an open and on-going debate between different locations to win the seal of authenticity but thanks to the work of organisations like wikipaella.org, which London Paella School chefs are ambassadors of in the UK, a consensus on the origins and ingredients has been reached.
London Paella School cooking classes
From 16 May 2016 cooking classes will take place every Monday, 6.30pm-9.30pm. Students will learn how to prepare a different paella and tapa each week and will sit down together at the end of the evening to enjoy their food and drink a beer.
Paella & Fire Sunday lunch club
From 15tMay Paella & Fire lunch club will take place on Sundays on a monthly basis, 12pm-4pm. Guests can enjoy a different type of paella and tapa each week accompanied by a salad buffet. The events are BYO and cost £25 for adults
For the full low-down, visit www.londonpaellaschool.co.uk.

Ice hockey team’s owner, manager and captain go up scissor lift until they sell 300 season tickets on Sunday … they’re still up there

Kakadu calling: Land of the Giants

Hey grand dad, whose pole is it anyway?