The 54-foot duck was installed two weeks ago by Dutch artist Florentijn Hofman in Victoria Harbour.

It has been reported that nearby hotels are advertising rooms that have great “duck views,” and yellow cakes shaped like ducks are all the rage.

But Hong Kong’s beloved installation deflated overnight, reducing the giant duck to something that looked more like a deflated beach ball. 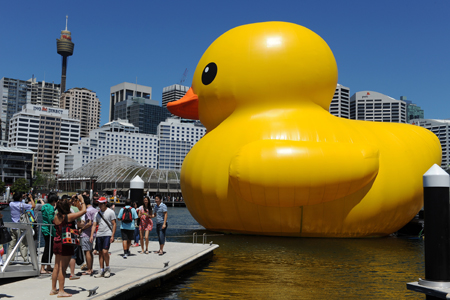 At first it was speculated that the duck had met a sinister demise, while others joked it had been struck with bird flu.

As it turns out, the deflation was part of planned maintenance work. Harbour officials simply said the duck “needs to freshen up.”

Which is rather disappointing, really.

In more interesting news of yesteryear, did you know that when the giant duck was installed in Belgium in 2009, someone stabbed it 42 times?