Not too long ago, a night out in Glasgow meant warm beer in a seedy dive, culminating in deep-fried haggis and possibly a headbutt from a local. Back in those sad old days, if you were told that someone was taking their clothes off under the railway arches, you’d have stayed well clear.

Fast forward to 2010, however, and Scotland’s biggest city has become a centre for exciting nightlife. And the girls (and boys) taking their clothes off under the arches are at the centre of a craze that has art fans agog from New York to Tokyo.

Dr Sketchy is an ‘anti-art class’, combining burlesque performance and life drawing. Invented by Molly Crabapple (a New York art student) back in 2005 as an antidote for lacklustre drawing classes, the Dr Sketchy events have now been syndicated across the globe and the Glasgow incarnation is, surprisingly, the UK’s most popular.

Despite not having picked up a pencil in a decade, I’ve headed north to see what all the fuss is about.

“It’s more like fun than art,” says Frodo McDaniel , the brains behind the Rhymes With Purple Theatre Company, that runs this branch of ‘Sketchy’. As well as burlesque performance and various life-drawing poses (directed by McDaniel and his sidekick, Ben Allison) there are comic songs, games and competitions. “Often in the competitions, the winners are just stick figures,” he reassures me. “We don’t take it too seriously.” 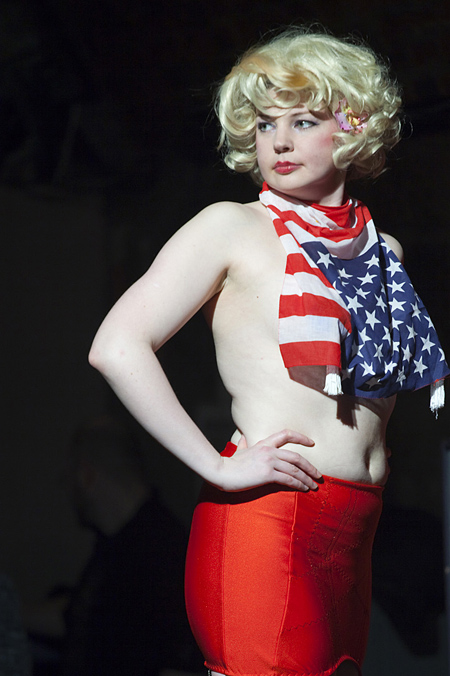 As Rufus goes to take his place on the stage to announce the first model, I collect art supplies from the table and look around the room. With its high ceilings and dark corners it’s like some sultry Parisian cave, with a bar along one end.

Cutting into my reverie, Rufus grabs the mic and, with no further ado, introduces: “The best bum in burlesque … Miss Mia Meow!”

An awed silence falls as the cavern is infiltrated by a sexy sheriff of the Wild West: all legs, boots and fringing. Tossing her dark wavy hair, she sashays into her routine, pulling out two tiny toy guns from her bikini and taking aim.

It’s tongue-in-cheek titillation at its best. Miss Meow puts off the big nipple-tassel reveal until the dying bars of her music before performing an impressive double tassel spin. The guy on my right positively beams with happiness.

I can’t take my eyes off her pink, crocodile boots with their six-inch heels. Not just for their sheer burlesque awesomeness, but because I’m aware that they’ll be hell to draw.

But when Mia stops twirling her tassels and I get down to sketching, I find that the basic rules of life drawing – look twice, draw once – come back to me easily in this relaxed, creative environment.

For a while it’s all very quiet, just the swish of charcoal on sugar paper. Mia poses cheekily: literally, her bum cheeks blooming out of a barely there sheriff’s costume as the room hums with concentration.

But it’s certainly not all art-work – it’s mostly art-play. I’m thrilled to win a badge for a caption competition, and enjoy an afternoon of beers, burlesque and lots of the trademark Glasgow banter. At the end of a happy afternoon I find that my drawing may not have improved, but my view of what Glasgow has to offer is immeasurably boosted. 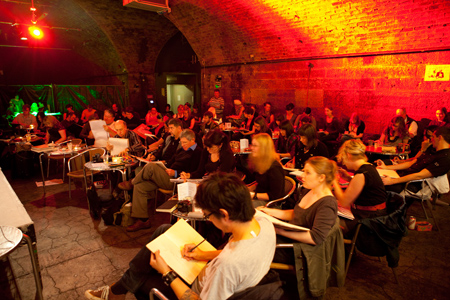 Five top nights out in Glasgow

Clubbing
Not just cool but sub-zero, the SubClub is no provincial pubescent pulling parlour. Promises instead ‘hedonistic …genre-defying clubbing’. And it delivers. See subclub.co.uk.

Live muic
With its hilarious name borrowed from a New York venue, King Tut’s Wah Wah Hut is the place to see bands in Glasgow. According to the NME, it’s ‘possibly the finest small venue in the world’. See kingtuts.co.uk.

Comedy
Now in its tenth year, The Stand was started as a hobby and is now among the top comedy venues in the country. See thestand.co.uk.

Karaoke
Get a taste of the old Glasgow at the Horse Shoe Bar. The longest continuous bar in the UK is most famous for riotous karaoke and home-made pies. See horseshoebar.co.uk.

WHEN TO GO: Dr Sketchy is held monthly at The Arches, Argyll Street, G2 8DL. £7 per person, students £5. See rhymeswithpurple.net.
GETTING THERE: EasyJet and BMI both fly from London to Glasgow, or take the train.
GETTING AROUND: There’s a good public transport system. Get Glasgow Flyer 500 bus into town from the airport (costs £4.50 one way, £7 return).
GOING OUT: A beer is £3.30 a pint.
ACCOMMODATION: From £14 for a hostel bed or £20 for a single room.
GET MORE INFO AT: visitscotland.com.

Pill developed to make people want to work out