A man dressed as a penis is laughing – it’s a surprisingly calming influence. The Superman costume hanging behind the counter is a genuinely enticing option.

An hour ago I was raving about the stupidity it must take to jump off a bridge, but now I’m about to do it, seduced by the beauty of AJ Hackett’s rural France outpost and the blast everyone else seems to be having – forget about my hatred of heights. It turns out Normandy has so many opportunities to do fun things that you’ll even say yes to the ones you find crazy.

This part of the world is no stranger to action, its coastline the site of the vital US, British and Allied forces’ Operation Overlord, or D-Day landings, in June 1944 which led to winning France back from Germany and the beginning of the end of World War II.

These days more foreign visitors shoot from Cherbourg, where the UK ferry docks – down the motorways to southern beaches, that is. It’s a huge mistake as they’re bypassing this awesome adult playground, where you can do nothing but eat and drink the local camembert and calvados or get stuck into the extreme. With its expansive rural settings and stretches of beaches, active adventures are everywhere and in three days I give a bunch of them a crack. 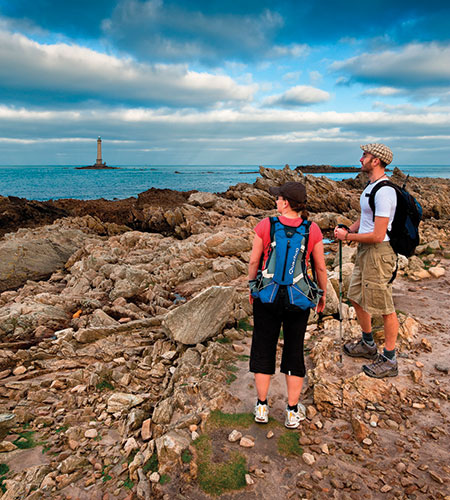 Hiking: La Hague’s landscape changes every time you look up

I begin with a hike along the ragged, beautiful headlands of La Hague Peninsula, where every look up is a new painting worthy of the hundreds of artists (such as Monet) for whom it’s their muse – cliff faces, deserted beaches (more time and I was in) or paddocks with freshly bailed hay or doe-eyed local cattle who I can’t help but thank for their fine cheese (if the milk doesn’t come from these brown-eyed girls, it’s not camembert).

As my group and I follow guide Marylene, I’m captivated by the paragliders floating peacefully overhead, and how they seem to be multiplying.

This area isn’t known for the sunshine of southern France, as each morning we get an overcast mist, but that just makes the afternoon rays more appreciated – unspoiled and with every passer-by greeting us with a grin, or in my case a laugh as I stop to chat to and photograph another cow, it’s a sign of what’s to come. 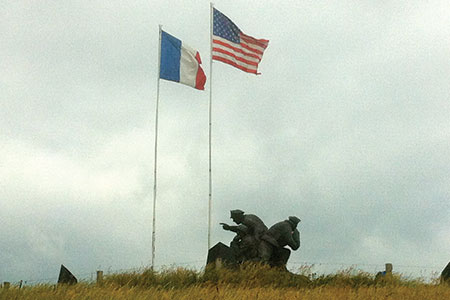 The next day I experience the perfect education and adventure balance with a visit to the Utah Beach Museum at Sainte Marie du Mont and a sea-kayaking expedition off Asnelles, amid the remaining parts of the man-made Mulberry harbours that made the D-Day landings possible.

To do one after the other is a must, as our guide Christian, a local who volunteers each June, gives a remarkable – and balanced – account of what challenges soldiers faced and their incredible feats in overcoming them. The museum is built to resemble a bunker – its first room in 1962 was actually a German bunker – and at most times you can see out to Utah Beach, where 800,000 soldiers came through.

At the end of the tour Christian tells me his dad had a farm two miles away and had his horses taken by the Germans (“The day the war ended he took them back, but they spoke German now,” he joked), and was a retired veteran himself – no wonder his stories were delivered with such insight and passion.

There are too many mind-blowing stories to tell here, but look up the exploits of Theodore Roosevelt Jnr and legendary bomber pilot Major David Dewhurst (whose millionaire sons recreated his B-26 bomber in a hangar at Utah Beach) for a good gist. 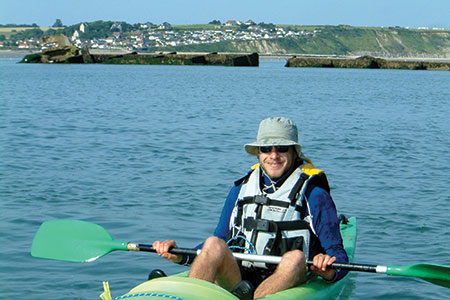 Berry inspiring: kayaking among what’s left of a Mulberry harbour

We now drive less than an hour to watersports hub Centre de Loisirs Nautiques in Asnelles, next to Arromanches-les-Bains, which was codenamed Gold Beach during the war. Even though the “Mulberry” here (one of two which were each a series of almost 150 five-storey concrete structures floated from the UK and dumped in formation with roads and more to unload vital supplies and weaponry) was decommissioned six months after the landings, many blocks remain.

With guide Antony I get to paddle inside one of the behemoth blocks – totally humbling. It could have been a paddle off a beautiful beach, but with the context of Utah Beach, I could begin to try and imagine what happened here in what is now such a peaceful town.

If the wind was up and the waves too much, we could have gone sand yachting with Antony’s boss, Francois, the sport’s reigning world champion. Definitely next time. 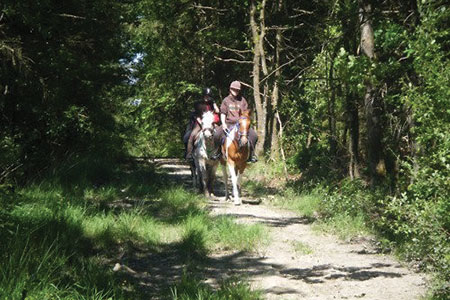 With our arms spent, the next day is a chance to sit and watch beautiful scenery go by … on a horse. Danish-French guide Caroline tells us much of the gorgeous, muddy forest of Saint Evroult we cover over a couple of hours has been rented from Xavier Louis Vuitton, and they keep his horses.

It’s definitely the domain of the other half but down-to-earth and welcoming is staple here – as we find in the homemade cake and wine we sample on our return. You can also hike in this movie setting.

And now for that silly jump. Reading up on the place, I hope my story of survival matches that of the Viaduc de la Souleuvre that holds the ‘world’s longest suspension bridge to nowhere’ and platform for the 61m drop (the world’s biggest where you can touch the water). 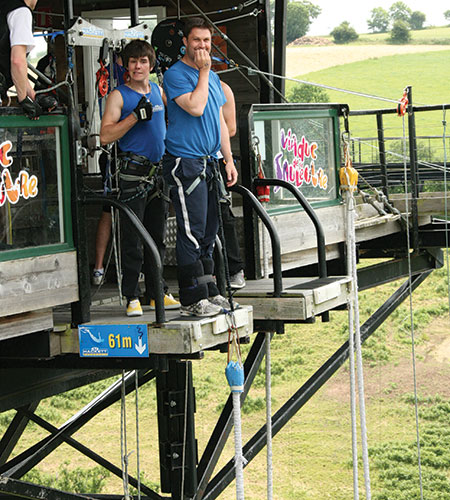 A vital train track during the war, it was never hit by bombs – not for a lack of trying from the nearby craters. I feel comforted by the slick confidence of the staff as I focus on the farmland ahead that was once a battlefield and the forest I’m surrounded by, and recall the guy on his stag do dressed as a todger.

A brief freeze on the edge overcome, I launch off to nearly touch the river. It’s exhilarating, fun almost, although I wish I’d tucked my shirt in (or worn the Superman get-up), but the Leffe I inhale at the cafe at the bottom makes more sense than this fleeting jump – like Normandy, a nice beer or glass of wine should be savoured, and taken again.

Getting there Brittany Ferries sail from Poole (also Portsmouth) to Cherbourg from £29 each way.

Budget: Since you’ll be driving around, look for this sign on the side of the road or go to the website below to seek one out anywhere in France. Les Routiers is the guarantee of a cracking value three-course feed with wine for nix (about a tenner). It’s the stop of choice for truckies and travellers have caught on. 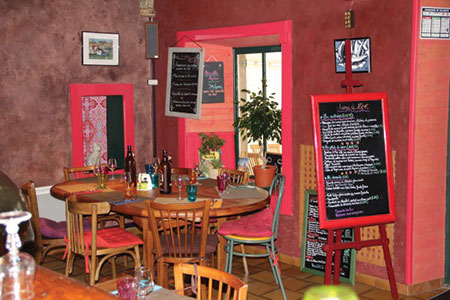 Midrange: Everything good about French food and people is on show at Le Racine (above) in Saint-Germaine-des-Vaux. Owner and head chef Tony is a character, who smokes his own fish, duck and anything else good. Go for a set menu for £15.50 or £23, but be sure local ‘sausage’ Andouille is part of it. And leave room for dessert.

Luxury: Not exactly a bank breaker (four-course treat is less than £25), but a more refined experience to the homely regional eateries is Restaurant O Gayot in Bagnole-de-Lorne. Modern with twists on classics and desserts such as the mint fiesta above (ganache, ice-cream, mousse, gel and tuile). 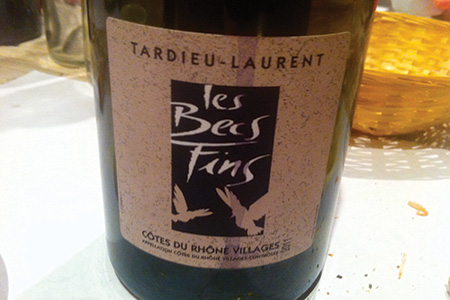 Budget: In the Calvados you have to get stuck into local cider, and the Ferme de la Sapiniére a short drive from Utah Beach does free tasting along with its tours of the orchards and production process. Its signature drop won gold at the 2012 French Agricultural Show à Paris, so you know it’s good. No White Lightning here, folks.

Midrange: The charismatic owner and waiter Pierre-Henri Lemessier makes it clear on entry to Restaurant Wine Bar Le Volet qui Penche in Bayeux that his joint is all about drinking wine and eating with it. Three courses is £13 and it’s about the same for a top-notch bottle of local plonk to set up a terrific evening. (3, I’Impasse de I’Islet, Bayeux; tel. +332 3121 9854)

Luxury: Normandy doesn’t really do pubs or bars without a big focus on food, but in Deauville you’ll find some mighty fine drinking holes. The American Bar at Lucien Barriére Hotel is a chance to splash out in style, with a glass of house white £10 or champagne £16. But it’s really a whisky bar, and they start at £19. 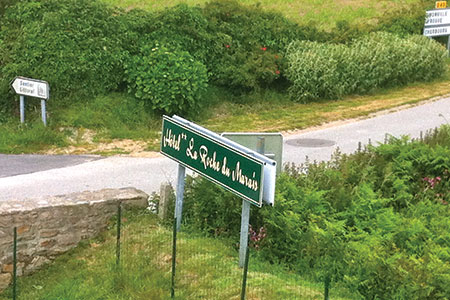 Budget: Quaint, comfortable and set up especially for hikers is Hotel La Roche du Marais (above) in the La Hague village of Omonville Little. All rooms look out onto fields, water and/ or the garden. You could have a worse day than staying here from £56 a night and eating at nearby Le Racine (see midrange eat). Brekkie included.

Midrange: If you want comfort and to know everything is where it should be, try the four-star Novotel Bayeux between Caen and Cherbourg from £76 a night. You can walk to local attraction the Bayeux Tapestry, drink over-priced beers in the bar or explore the town. See above for a top place to eat and drink. 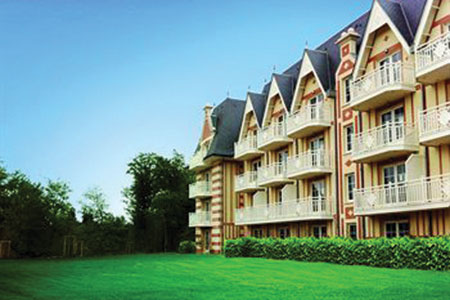 Luxury: Brand new B’O Cottage in Bagnoles-de-l’Orne does its best deal on rooms per week with the cheapest ranging from £192 in low season to £427 in peak. This place (above) is all about time standing still, chilling out and taking advantage of its sister spa a short walk down the hill. The town itself looks like a beautiful painting.