Great Scot: We take on Scotland’s wild beauty by mountain bike, sea kayak and canoe in the Great Glen

Onshore, an otter pokes his head above the rocks, watching as we paddle past – a rare appearance from the typically shy characters. “It’s a wee little Nessie,” our tour leader Stephen jokes in his soft Scottish brogue. “You’ll not be gettin’ yer money back now!”

During the past few days we’ve been making our way along the Great Glen – a faultline that cuts right across the stunning Scottish Highlands – by mountain bike, canoe and kayak.

As a seasoned deskbound mouse-clicker, I’ve been anticipating this trip with trepidation. Following years of gym-dodging, I’m nervous about how my clapped-out carcass will hold up.

So when I’m first introduced to my fellow travellers and spot a guy wearing a ‘New York Athletic Club’ T-shirt, I’m convinced I’ll be left in the dust. But it turns out that Dan, a US teacher from a tough inner-city Philadelphia school who is here with his girlfriend, Kate, was given the T-shirt as a gift. Phew.

Our journey begins in Fort William, situated between the mighty Ben Nevis mountain and Loch Linnhe.

It’s a mecca for hikers and outdoor types, with more adventure-gear shops than you can shake a walking pole at, and it has a number of cosy pubs offering live music, from rock cover bands to traditional ceilidh groups.

We meet our instructor, Stephen, and, health declarations signed, hop on to mountain bikes and pedal along the Caledonian Canal, constructed in the 19th century and linking all the lochs along the Great Glen.

After a leisurely cycle breaks us in gently, we take things up a notch and plunge into pine forests, tearing along dirt tracks through beautiful moss-carpeted woodland, down steep hills and over bridges – all in brilliant sunshine.

Our other trip instructor, Rosie, an English lassie who moved here a few years ago and “missed my friends, moved back down south, then missed the mountains and came back,” has been driving our gear around and meets us on the edge of picturesque Loch Lochy, with tents already set up.

That evening, we pile into a floating pub moored at the South Laggan locks for dinner. We play Chase The Ace, swipe at midges and swap riddles until the cards are blown overboard in a sudden gust of wind.

Day two and we’re paddling two-man canoes from South Laggan along a canal. I sit up front, as Stephen steers and points out historic spots along the way. 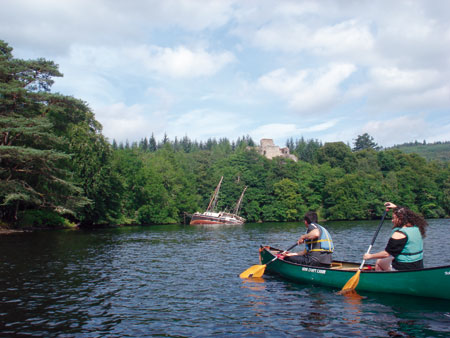 The stories are typical of Scotland’s brutal history, involving mass beheadings and burned-down castles. It all seems so incongruous in this peaceful, near-untouched landscape.

After lunch, we head downstream to Morag’s Lodge in Fort Augustus, on the edge of Loch Ness, where there are great local organic ales and a pile of kilts to try on when the booze kicks in.

The next day brings a misty morning and foggy heads from excessive ale consumption, but we head out on to Loch Ness in solo sea kayaks.

It’s hard work, although Scotland’s understated beauty more than makes up for it – and, despite my misgivings that I wouldn’t be up to the task, I hold my own without collapsing in a crying heap or capsizing.

When we eventually reach the ruins of Urquhart Castle – “the Scots blew it up to stop the English from stealing it back,” Stephen says – we’re all exhausted, but in good spirits.

The next morning, we get helmeted up for the final canoe ride down the River Ness.

The rain lashes down for the first time as thunder growls above.

At one particularly tricky juncture, Kate and Dan’s canoe spins around and they head down the rapids backwards, screaming and laughing. It’s been one hell of a ride. 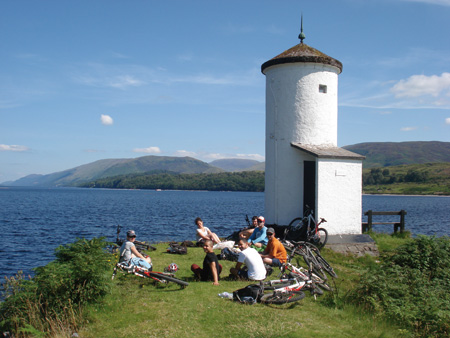 Check out the Eagle Barge Inn, a converted barge pub/ restaurant that serves filling nosh and seafood platters from £7.
greatglenway.com/eateries

The Loch Ness Inn in Drumnadrochit caters to a more upmarket palate with traditional Scottish and posh contemporary cuisine. Mains
from £8.95.  staylochness.co.uk

The go-to pub for weary hikers in Fort William is the Grog and Gruel. Offering a wide selection of single malt whiskys, main meals starting from £5 and local ales.  grogandgruel.co.uk

Sit by the canal and have a few ciders at The Lock Inn in Fort Augustus near the edge of Loch Ness. Pints from about £3.

Morag’s Lodge in Fort Augustus, minutes away from the shore of Loch Ness, boasts a bar stocked with local organic ales. Dorm beds from £20pn, twin rooms from £48pn. Bonus: serves an all-you-can-eat breakfast for £2.75.

EasyJet flies from London Gatwick to Inverness twice daily from £22.99 each way.

Video: Man jailed for hit and run on toddler abandoned by passers-by in case that scandalised China

Cost of Living in Ireland