Fyfe Dangerfield, 30, is the creative genius behind Birmingham critical darlings Guillemots. Here, the frontman talks about the band’s new release, Walk The River, why he left to produce a solo album and their festival plans.

Part of Walk The River was recorded in Snowdonia last summer. Why?
The band did the first few weeks there and we finished it off in London, but Snowdonia is a very magical place. It felt very ancient, like the land of wizards.

Did some of that magic make its way on to the album?
I hope so – we had a sound in our heads for that was quite expansive, a vast sort of sound and getting to Snowdonia we thought, “this looks how the record should sound”. It was beautiful.

Did the isolation help with recording?
We’ve never recorded like that, where we’ve just been away from everything in a cottage in the middle of some woods. It was beautiful. It’s a lot easier to be creative when you’re stuck away like that.

How did the band dynamics work?
Brilliantly, we all loved it. It was nice to all hang out like a band again. At the end of each day, we’d just hang out watching TV, sleeping in the same house. It was like we were all flatmates – it was great. We definitely want to do that more.

There’s definitely a shoegaze element and also a real kitschy space age vibe. Is that what you were aiming for?
Not consciously – it’s not like we were sitting around listening to My Bloody Valentine or anything. Everything you hear rubs off on you and we definitely like a lot of that stuff. We had just spent a year writing the record and we just wanted it to sound more like a band.

Our first two albums weren’t always the sound of a band – there’s been a lot of embellishments. On the first record there was lots of strings and brass and on the second everyone was playing synths and samplers.
So we wanted to make an album less like that but at the same time we didn’t want to just sound like a boring rock band. We wanted the starting point to be simple but to have this backdrop that was quite magical and otherworldly. We definitely wanted it to have colours and textures. When we make music we want people to get lost in the atmosphere.

Your first album, Through The Windowpane, was a huge critical hit and garnered a Mercury Prize nomination. Is it hard to live up to that especially when the second album Red got a lot less attention?
With a first record, you just do what you do and don’t think about it. But once people start writing about you, it’s impossible not to become more self-aware so it can sometimes make it harder to know your own mind.
We’re really proud of Red and there was an element of us wanting to challenge people’s perceptions of us.

The last thing we wanted to do was just make the same album again. I’m sure a more career-minded band would have done the complete opposite.

The third album felt like a new start – it was the beginning of a whole new chain of creativity. We wrote so much material last year that we’ve got loads leftover, we can come back to later on.

You did a solo album last year, Fly Yellow Moon. Did you feel the need to carve out a niche for yourself outside Guillemots?
I just felt like it. There wasn’t any big plan behind it. I’d been writing these songs and just felt I wanted to do something different. Music’s just what I do. I mean, I love playing with Guillemots but it’s not like an exclusive thing. 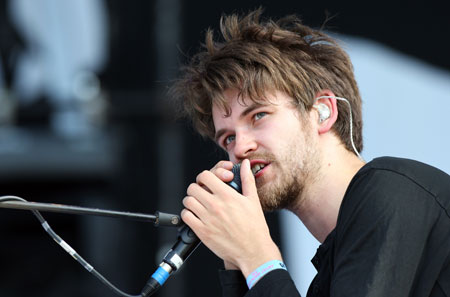 So all the rumours that the band were about to split up weren’t true?
[Laughs] There was never any truth in that! Whenever someone does a solo album that’s just what the press thinks. We were always going to take a few months off and that’s what we did.

You said you don’t consider yourself to be a singer, so how did you end up as the frontman for the band?
At first I wanted to find someone else to front the band but I ended up doing it because I just knew how I wanted everything to be.

Are you a democratic frontman or a bit of a controlling despot?
We’ve reached a really good equilibrium in the band. When we first formed, I’d already written the songs, but for the last records, we are all having an equal say. We’ve now reached a point where we are very much a band. It’s certainly not just me as the lead singer with a backing band.

You’re doing a few smaller festivals this year – do you prefer them?
They tend to be a bit less corporate.

Are you a greasy burger person or do you prefer something organic when it comes to festival food?
It depends on the mood of the day – there’s a time and a place for both. I could go a dirty burger anytime though, there are no mathematics to these things.

What acts are you looking forward to checking out this year?
Lykke Li – she’s great, and a little bit more vampy these days. She’s been working with Bjorn Yttling, who is also great.

Did you go to festivals much before you were in a band?
Not really as they all seemed really expensive but I went to Knebworth to see Oasis when I was about 16. I remember Noel Gallagher telling us this was history, right here, right now. I’m not sure we were making history but I think he persuaded us at the time.

Guillemots are named after a type of bird. Are you a birder by any chance?
Yeah, I do like birdwatching – I like wandering around marshes and moorlands. I’m pretty good at identifying them, too.

» Guillemots are playing at Hop Farm Festival. The fourth annual event boasts a stunning line-up, including the Eagles, Morrissey, Patti Smith, Newton Faulkner, Carl Barat and Death Cab For Cutie. The two-day festival is held at Paddock Wood, Kent, on July 1-2. Weekend tickets are £130 and day passes £70. Camping is £30 for the weekend/£25 per day. hopfarmfestival.com. Also see them at Dot to Dot, Glastonbury, Wilderness.