Toddy, the 25-year-old King penguin in question is obviously getting on a bit (in bird years anyway) and, according to 3news.co.nz has been feeling the cold more so than usual this year.

Due to Toddy’s advanced age (most King penguins only live to be around 15-year-old) he has developed arthritis in his feet. Naturally his condition is bad enough during the warm summer months, but becomes almost unbearable during the cold New Zealand winter.

Toddy’s ailment have forced the staff at Kelly Tarlton’s Sea Life Aquarium to come up with a novel way to help ease the aging penguin’s aching joints – and no, unfortunately, it’s not special penguin socks.

The specialist penguin curatorial team has placed an insulated rubber mat into the penguin enclosure for Toddy to stand on (pictured below). Aww, isn’t that adorable! 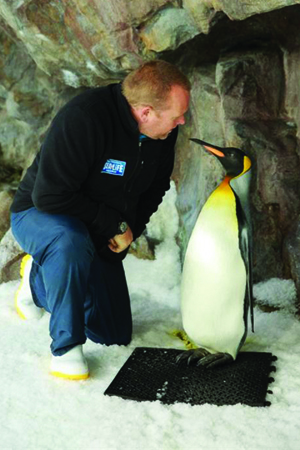 It is being reported that Toddy’s feet are much happier now that he has a warm place to stand after his habitual morning swim.

Whether or not the other King penguins with whom Toddy shares his enclosure are envious of his warm spot or dismissive of it is unknown… Probably a fairly moot point anyway.

Toddy has been at the Kelly Tarlton Sea Life Aquarium since 1994, which is no doubt why they’re so keen to take good care of him in his twilight years.