Hugh Jackman was injured performing a stunt on The Oprah Winfrey Show at the Sydney Opera house and the incident was captured on live TV.

Aussie movie star Jackman was planning a dramatic entrance as he slid down a zip wire from the top of the Sydney Opera House onto a giant outdoor stage. However the Wolverine actor failed to stop and crashed into some light rigging, injuring his eye.

If the accident hurt, burly Jackson wasn’t showing it and he laughed off the pain, saying: “That was so much fun, until the end.”

Jackman’s injury was bad enough for Oprah Winfrey to halt production of her show until paramedics treated the cut under his eye, but as soon as he was bandaged up, the X-Men star took to the stage for his scheduled interview.

After downing some red wine and holding ice to his face, Jackman told Oprah:

“I came down waving to everyone, looking over Sydney Harbour, saw my dad, the kids and you, went to pull the brake and then boing… I’m OK… It doesn’t hurt.” 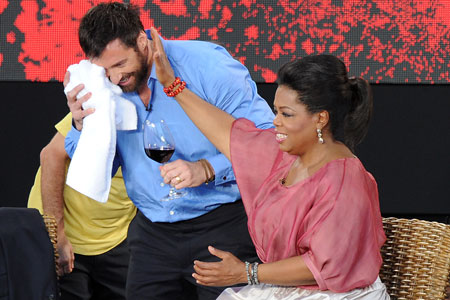 He then gave Oprah a lesson in the joys of Vegemite, offering some to the chat show host who claimed to like it.

Flare enough: American man accidentally shoots himself in the groin with flare gun