Jackie Chan on stunts, scares and getting star-struck

With a movie career spanning nearly 50 years, Jackie Chan would be forgiven for wanting to hang up his action-man image and put his feet up. But, the 56-year-old actor, who was born in Hong Kong, has no desire to settle down.

He appeared in his first film aged eight – and he hasn’t stopped since. Chan was just 17 when he worked as a stuntman on the Bruce Lee movies First Of Fury and Enter The Dragon. He went on to hit the bigtime in Asia in the Eighties – and managed to break into Hollywood with Rush Hour and Shanghai Noon. Here he reveals what’s next.

You’re such a big star, why do you still do Hollywood movies?
Hollywood is the place to be no matter how big you are in your own country. There you become an international star.

Do you turn down many films?
In Hollywood, at the beginning I had no choice but now I pick up whatever I like.

I am pretty lucky – now I can do whatever I want. When you are getting bigger in Hollywood you can go, “No, I don’t want to do this, I like this and that!”

You do your own stunts. What do the insurance companies say?
They have a security guy on the set. I say: “What do you know about stunts?” Sometimes it is frustrating. But now they have hired a stunt co-ordinator, then whatever I say, he knows, and he just makes sure that everything is safer.

Do you ever get star-struck?
Yeah, after all those years, I still do. A few years ago I met Steven Spielberg. I thought: “Wow!” But he looked at me and went: “Wow, can I have an autograph, for my son.” 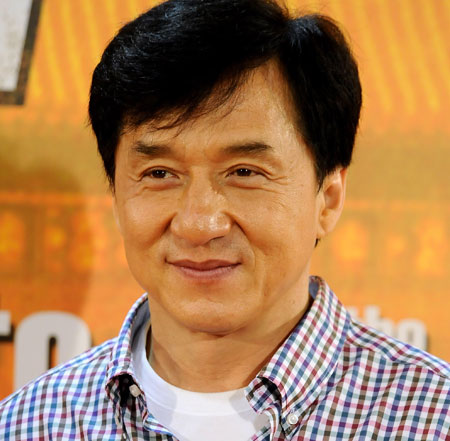 Do you get recognised all the time?
For the last 15 years I almost haven’t had a private life. Before, I could go out on the street wearing my glasses and nobody would recognise me. Today, I cover my face and people still recognise me.

What’s your daily routine?
I enjoy staying at home by myself wearing underwear. I do some training in the morning, throw some punches, then I go to work in the garden, jump in the swimming pool and if I see some dead leaves, I clean the whole garden, then I go back to train. That’s how I spend the whole day, in the garden. I love to clean.

Does being a star go to your head?
I thought I was a big giant 30 years ago. I was a low-class stuntman and one night I become a big star. Thirty years ago my salary was US$500,000 for a movie. Then, the biggest star in Asia only got US$20,000. I buy Porsche, Ferrari. I’m the king. I come to America, I sit there, and the reporter asked me: “What’s your name?” “Jackie Chan.” “Jackie, who?” “Jackie Chan.” “Oh, that’s like Bruce Lee.” Then I  look at Burt Reynolds earning US$5m. Then I realise I’m not the biggest star. The biggest stars are Burt Reynolds, Sammy Davis Jr. Nobody knows me. In America nobody bothers me!

Are you addicted to the adrenalin of the job?
Yes, I like to do something different than other action stars. I want to be different.

Was it strange not to have a fight scene in Karate Kid?
There is one but they cut it because it was too long. Actually, I didn’t want any fight; I wanted pure acting because I really want to turn into an actor.

Do you ever get scared?
Yeah. I’m an ordinary person. When I’m doing a stunt I’m scared but I want to challenge myself, I want to do it.

What’s next?
I hope some directors will give me a good script where it’s only acting. Not a kissing scene (laughs).

» See the martial arts masters in action as the Syfy Channel launches Kung Fu Christmas, showing from 10pm every night between Dec 17 and Jan 2.

Donate your clothes to charity from your phone

Lord of the flies: Lost German backpacker survived in the Outback on diet of flies