Pnau’s Nick Littlemore on breaking from Empire Of The Sun

Nick Littlemore hit the big time as one half of Empire Of The Sun but he’s here to talk to TNT about his other band, Pnau, and their new album about heartbreak …

Do your parents still refer to what you do as “making drug music”?
No, now that I’m doing a Broadway Musical [Littlemore is currently writing music for Cirque Du Soleil] they’re very excited – they can talk about it with their friends. They like Guys & Dolls and Westside Story and all that kind of shit. Mum’s never been to New York so I’m going to fly them out next year to see the show, it’s going to be so exciting.

You describe Pnau’s upcoming album Soft Universe as emotional. Is it going to be a departure from the hedonistic dance-y feel of your previous albums?
No, it’s very hedonistic actually, but it’s now hedonism with a cause. We actually have some songs in there instead of just loud sounds. I got my heart ripped quite firmly from my chest and thrown a fair distance against a wall and you can see the blood on the wall dripping down. So I suddenly had a very strong subject to write about.

Elton John took a real shine to Pnau’s third album and contributed to Soft Universe – rumour has it you’re making another album with him…
We’ve been writing together since we met. I mean, I’m writing with Elton John: it’s such a trip! I’ve always loved wangling my way into working with people. I managed to work with Sonic Youth, the Yeah Yeah Yeahs, Hugo Race from the Bad Seeds, Skye Ferreira recently. But with Elton, very early on when he said that he liked the music, I said, “we have to write a song” and it didn’t feel like I was taking something from him at the time. We haven’t written for the record we’re making together, it’s a different kind of animal, but it’s going to be amazing. 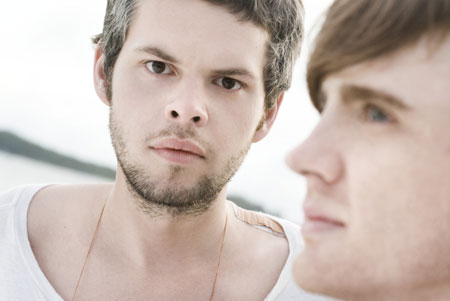 You went AWOL before Empire of The Sun’s debut show’s in Oz. Why?
I dunno, I just check out sometimes. I’m working on this Cirque Du Soleil every day – it’s been two years now and it’s an incredible amount of work. I’m living in Montreal, I know three people and they all work for the circus. I work every single day, 14 -18 hours day and all I think about is running away to India, on my bad moments. And I guess it’s just always appealed to me, the ability to run away. [Empire Of The Sun] wasn’t ripe for me. It wasn’t quite ready to be picked, plucked and taken to the stage and flogged like a fucking dead horse and capitalised on. It really wasn’t where it should have been at that point. Whatever, they went and did it and the rest is history.

Are you and Luke Steele [from Empire Of The Sun] on good terms now?
Oh yeah, it has nothing to do with friendship, but all that other crap that goes along with the music industry. It has to do with the main motivator in the world which is a very sad word called greed. And that’s not Luke, he’s not a greedy guy.

Do Empire Of The Sun have a new album on the cards?
Luke and I have written a song called Lesson Learned and it’s really beautiful. It’s a little while away. Records happen when they’re about to burst. Especially the second record. People rush in to make the second record and they make a really crappy one. It’s gotta feel effervescent.