K9/10: Dog can balance almost any household item on its head

Quite how you discover that your dog is excellent at balancing mundane items on his head is beyond me, but for Nicole Lee, her three-year-old kelpie has given her a one way ticket to internet fandom and her very own 15 or so minutes of fame.

“The balancing act started when we tried balancing a kernel of popcorn on his nose one night while watching a movie at home,” owner Nicole Lee explained to The Huffington Post. “We quickly learned he was patient enough to allow us to stack really anything on his head (as long as it’s not too heavy).”

The adventures of Jack, the cattle dog has been chronicled by Ms Lee and the photographic evidence of his prowess has found its way on to the popular website Reddit. 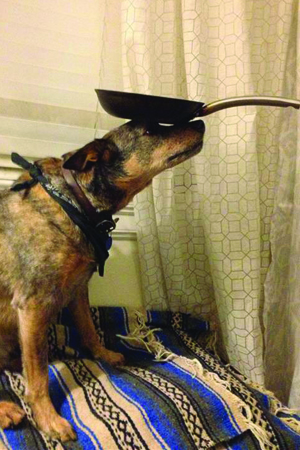 Under the tag line “Our dog is really good at balancing things on his head”, Lee and her boyfriend asked for Reddit users to submit requests for items they wanted to see Jack balance.

In the last six days the post has received 1700 responses, with some of the items including a lightbulb, clock and a stack of coins.

The photos are certainly cute and Jack looks like a most handsome animal… I’m just not sure about the bowtie, it’s a little bit too much, a little too hackneyed.