Dawn is breaking over the tiny town of Buñol. For 364 days a year, the streets would be deserted at this time – but not today. Already, a buzzing crowd is pushing its way towards the central square, pints of sangria and beer in hand, adrenaline simmering.

It’s 6am and the tomato battle proper doesn’t commence until 11, but those here already are glad they peeled their hungover bodies from their beds this morning. Behind them an ever-thickening crowd streams down the hill; the narrow streets are already packed and, believe it or not, some La Tomatina aficionados have been here for hours, staking out the prized spot in the centre of town where a traditional ham hangs from a greasy pole (snigger).

The fight doesn’t start until a cannon sounds, in theory when a determined climber brings down the ham – a near-impossible task in reality. 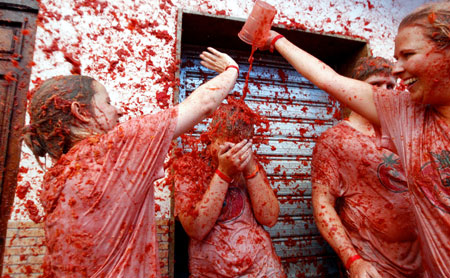 As the minutes go by, an electricty emanates from the crowd – while it might be smiles and camaraderie now, everyone knows a war is about to start.

Awareness of the carnage to come begins to bubble over as heat, booze and testosterone ramp up the atmosphere. By now, it’s hardly possible to move on the narrow streets as 45,000 people await the delivery of the 100 tons of rotting tomatoes that will become their ammunition.

A bloke with an Australian map tattooed on his back has scrambled on to a balcony and is swinging his t-shirt triumphantly above his head. Below him, guys form a circle and begin whipping each other with soaked shirts while, holding hands, a group of friends pushes through the mayhem in as-yet unsullied white. As beer is sloshed over feet, a cry of “Ole, Ole, Ole” goes up.

And then, suddenly, the cannon explodes. The crowd goes wild, baying for tomatoes, clamping goggles to heads, girls checking that their triple-layer of bikini, bra and sports-top is in place. At the end of the packed street a behemoth of a truck rumbles into sight, the facilitator of red oblivion. 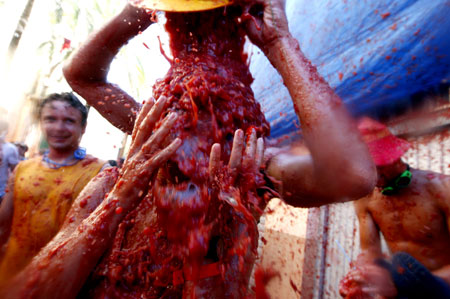 Atop the truck sit La Tomatina’s dedicated generals, rallying troops with the call, “Tomatina! Tomatina!” As the vehicle edges onwards it seems impossible it will fit through the blockade of bodies, but a pathway is cleared and somehow the fight is about to begin.

With a swoosh a gargantuan pile of tomatoes is dumped and, as though a switch has tripped, the world turns red. Suddenly, those sharing an amicable joke a minute before are immersed in combat, each fruit slammed into a head retaliated ten-fold with handfuls thrown in faces, ground into hair, rammed down tops.

Those wearing goggles find themselves unable to see, windscreen wipers needed to clear an inch of red gunge from their panes. However, those without fare little better, peering between chunks of tomato that hang from eyebrows and stick to lashes. But this is no time for wimps; new missiles must be gathered at every opportunity. 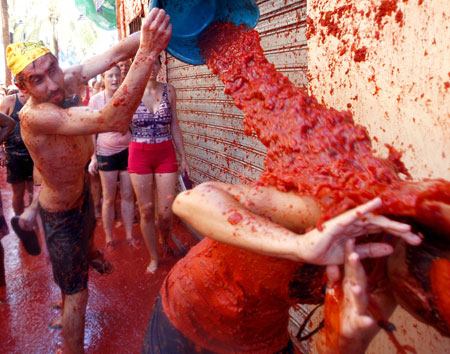 Like lightning, new targets present themselves: a tempting back, a vulnerable head, a mate’s gasping face. With pure joy, this cavalcade of adults loses all shreds of dignity in a shouting, chaotic release from the restraints of everyday life.

Then “BOOM”, the second cannon is sounded and, like overexcited but ultimately obedient schoolchildren, tomatoes are laid down and the fight is over.

Euphoric but dazed, the crowd shuffles slowly back out of the narrow streets, exchanging laughs and half-guilty looks as the destruction wrecked on Buñol – and each other – sinks in. Were it not for the smiles, the dripping red walls and limping, splattered humans would be straight from Tarantino.

As the Tomatinians stand under hoses, the gore seeps through the streets and I pity the locals. The euphoria may have been pure but the aftermath is simply purée. 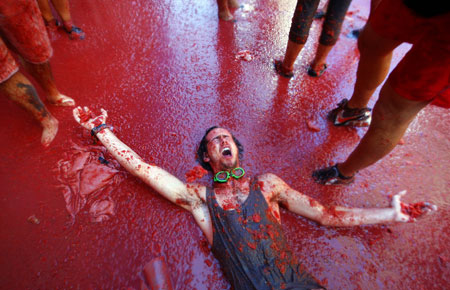 So what’s it all about?

La Tomatina has gained momentum since 1944 but its origins are shrouded in mystery.

Any local has stories about their festival. Some say La Tomatina began with a fight between some youths who overturned a vegetable cart, while others claim it started as a way to humiliate a bad musician. Another theory puts the first La Tomatina as part of a carnival parade.

Perhaps the most satisfying explanation is that the tomato throwing originated as an honest, if unsophisticated, political protest against unpopular councilmen.

Whatever the truth, La Tomatina was temporarily banned under Francisco Franco for having no religious significance, perhaps part of the reason for its renewed exuberance when revived in the 70s.

When done right, La Tomatina is an epic experience that you’ll be talking about all year. But it can go pear-shaped. TNT has seen people in still-white t-shirts at the end of the festival, cursing that they got there too late to throw a single tomato. We’ve also seen people getting black eyes from flying, soaked shirts, so beware.

What to do in Valencia

Valencia lies on the Mediterranean and you’re close to a number of sandy beaches. Playa de la Malvarossa – where you can swim or eat in a seafront café – is 15 minutes by bus from the city.

City of Arts and Sciences

The shell-like building itself is incredible. Inside is the largest aquarium in Europe and an IMAX laser cinema.

Part of the city’s beautiful Old Quarter, this is where a lot of Valencia’s nightlife starts. Nearby El Miguelet is also packed with cafes and bars, just don’t expect anything to get going until late.

This long, green park runs the entire length of Valencia and is accessible from nineteen bridges which cross it. You can walk through the garden to the Barrio del Carmen or city of Arts and Sciences.

Scoff squid or cured ham in the colourful Central Market, housed under domes and mosaics.

This beautiful cathedral is said to hold the legendary Holy Grail, used by Jesus at the Last Supper.

Have a look for bargains from Mango, Zara and El Corte Ingles in the centre of town or nose around the independent shops in the Old Quarter. If you’ve got cash to splash, visit the upmarket Calle Colón.

» Frankie Mullin went to La Tomatina with Busabout (08450 267 514; busabout.com). Busabout run one, three and five-day trips to La Tomatina from Valencia. Trips include guided excursions, party nights and transport, while extended packages offer the choice of hotel and hostel accommodation. Prices start from £55.