‘Like a feminist tsunami’: On Feb 14, One Billion Rising global event and campaign aims to stop violence against women

“Rise and dance” is the vociferous message of One Billion Rising – a global campaign demanding the end of violence against women.

On February 14, there will be 190 countries around the world holding noisy, energetic events encouraging “activists, writers, thinkers, celebrities, women and men” to “strike, dance and rise”.

So far, more than 13,000 organisations, including in Australia, New Zealand and South Africa, will be taking part.

It’s the latest in an increasingly louder feminist movement, following on the heels of SlutWalk – global marches sparked by a Toronto policeman’s comments that women should stop dressing like “sluts” to avoid rape – and the Free Pussy Riot demonstrations, demanding the release of the Russian band jailed for their controversial performance at a cathedral.

But where SlutWalk was criticised by some as sending out the wrong message – suggesting the movement, which saw scantily clad protesters with placards bearing the provocative, “It’s my hot body, I’ll do what I want”, wasn’t the best way to address a plight sparked by a comment made by one man – One Billion Rising has been given more credence. 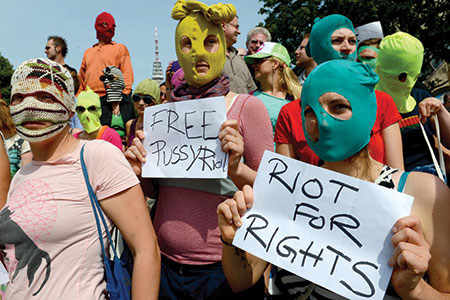 It was formed by Vagina Monologues writer Eve Ensler last year, after learning the statistic that one in three women around the world are raped or beaten at some point in their life.

With the world’s population at seven billion, it equates to one billion women and girls suffering from violence.

According to the World Bank, women aged 15-44 are more at risk from rape and domestic violence than from cancer, car accidents, war and malaria.

And the American Medical Association claims sexual violence, rape in particular, is the most under-reported violent crime in the world, making statistics widely unreliable.

Nearly every country in the world will be holding a One Billion Rising event, each wanting to express their desire for change differently. 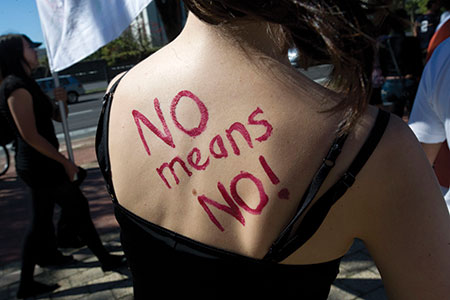 Campaigners in Mogadishu, Somalia, are planning its first ever flash mob, New Zealanders will be doing the conga in Wanganui, while Aboriginal women in Australia will be taking over a stadium in Queensland.

“I’ve never seen anything like it in my lifetime,” Ensler told the Guardian.

“It is something that has gone across class, social group and religion. It’s like a huge feminist tsunami.”

Ensler has been touring the world, spreading the message of the “day of change”, this year held on what will be the 15th anniversary of V-Day, a global movement for women’s rights started by Ensler which has to date raised more than £57m.

It’s also educated millions worldwide about the issue of violence against women and funded shelters and safe houses in Democratic Republic of Congo, Haiti, Kenya, South Dakota, Egypt and Iraq.

As part of her tour, Ensler visited south Asia for three weeks in December, witnessing first-hand the outrage over the gang rape and murder of 23-year-old medical student Jyoti Singh in Delhi, India.

She said the anger – which saw thousands take to the streets to demand justice and more safety for women – had resulted in support for the campaign.

“In India, One Billion Rising is at the centre of the biggest breakthrough in sexual violence ever seen,” she said. 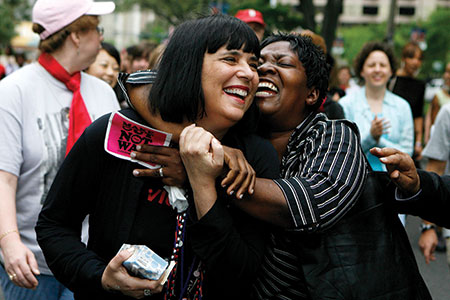 She told TrustLaw: “I’ve been working on the issue of violence against women for 15 years and I have never seen any country where, for so many weeks, there are so many stories discussing rape, equality, amending laws in the national newspapers … where sexual violence is out there in the public discourse every day.

“That’s a breakthrough in consciousness which many feminists like me have for many years been waiting for.

With the discussion on sexual violence, the window to women’s equality is open wider here than I’ve ever seen it.

India is the vanguard.”

The movement is also gaining momentum on social media – with #1billionrising widely used. And it’s not just women taking part, with #MenRise also popular on Twitter.

There are so far more than 80 events taking place in the UK (the One Billion Rising Art Festival), with dances, workshops and flash mobs in London.

On February 4, Ensler will be in the capital for a sold-out event at Café de Paris with Thandie Newton and other celebrity campaigners. 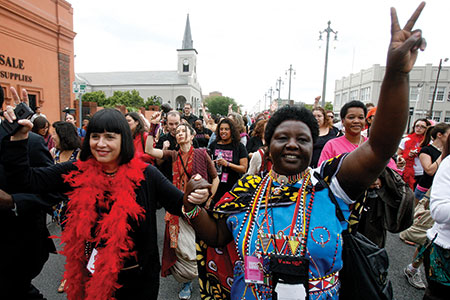 Restless Buddha is organising The Young Vic Rising, urging people to get involved and “get your groove on” at its dance flash mob at the theatre in Waterloo at 1pm on February 14.

At the same time, Abena Oppong, equalities officer for the Labour Group at City Hall, is working with the London Assembly to arrange a cross-party dance flash mob in the chamber.

Ensler, who says V-Day was started 14 years ago “when we had the outrageous idea that we could end violence against women” added: “When one billion bodies rise and dance on February 14, we will join in solidarity, purpose and energy and shake the world into a new consciousness.

“Dancing … has no set direction but we go there together. It’s dangerous, joyous, sexual, holy, disruptive. It breaks the rules.

It can happen anywhere at anytime with anyone and everyone. It’s free. No corporation can control it.

It joins us and pushes us to go further. It’s contagious and it spreads quickly. It’s of the body. It’s transcendent.” 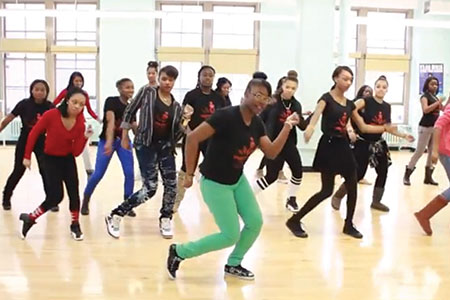 Campaigner Elena Trethowan is involved in organising the One Billion Rising flash mob in Perth, Australia.

The psychology student said the movement was vital for rising against physical and sexual violence against women, in her home country and around the world.

“Violence against women is a major contributing factor to instability within the family and within communities; and families and the communities that surround them are the foundation of our society,” she said.

“As soon as I saw the videos introducing the One Billion Rising campaign, I wanted to be involved – women and men in almost every country across the globe, rising and dancing together on the same day for a common goal, what an incredible act of solidarity and defiance.”