The eyes of the world were on Bolt, whose supreme confidence and almost inhuman prowess left few doubting her would win the Olympic 200m final at London 2012. So much anticipation, over so fast!

Powering past the finish line, Bolt finished the race in 19.32 seconds. Silver was taken by Yohan Blake and bronze by Warren Weir, also a Jamaican.

The fastest man in the world is now, by his own admission, an Olympic legend. Although the world – and in particular his native Jamaica – bestowed the status on him some time ago, Bolt had said: “People always say I’m a legend, but I’m not. Not until I’ve defended my Olympic titles. That’s when I’ve decided I’ll be a legend.”

Either way, no other Olympic event generates the excitement that Bolt’s races do and this evening the atmosphere in the London 2012 Olympic stadium was electric.

Playing up to the camera before the final, Bolt basked in a superstar status that will now, with his new gold medal, reach epic proportions.

As the crowd chanted “Usain! Usain!” the victorious sprinter wrapped himself in a Jamaican flag and did some impromptu press-ups on the track. 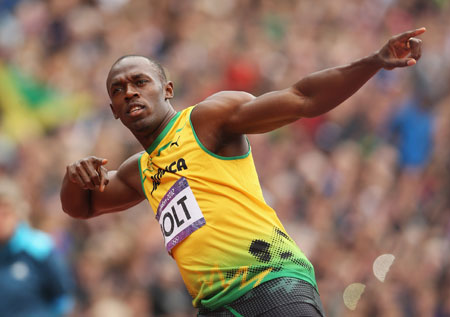 The race was not, however, without its challenges and Bolt was faced with tough competition, not least from compatriot Yohan Blake.

Blake won his semi-final 200m heat in 20.01, faster in fact that Bolt’s 20.18. In the event, Bolt beat Blake by only a narrow margin. Anyway, the mind-blowingly expensive watch-wearing athlete had played down his chances of beating his rival.

“I’m not really focusing on beating him [Usain Bolt],” said Blake. “I’m concentrating on running my race. My plan is just to execute.”

For his part, Bolt has always been dismissive of Blake’s chances, often pointing out the fact that his fellow Jamaican “works much harder” the he does. The implication being that Blake is therefore less talented.

Bolt always claims to be the world’s most naturally talented athlete (on his Twitter account, for example) and few would choose to argue with him.

Tonight the world is certainly happy to grant Bolt the legendary status he said should be his if he won gold in the men’s 200m final tonight.

It is unknown whether his Olympic gold medal celebrations tonight will include partying with the Swedish women’s handball team. 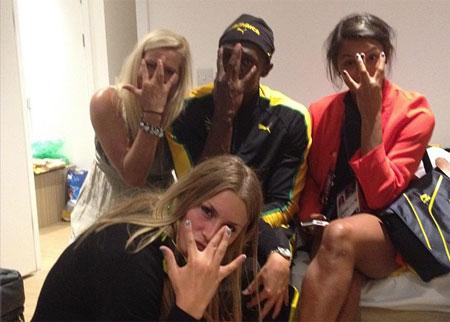 Bolt celebrated with a Swedish-girl-Gaza-sign party after his 100m final. Tonight… who knows?

In his native Jamaica, Bolt fans will be beside themselves. Here’s how the people of Half Way Tree, St. Andrew celebrated when Bolt won gold in his last race.

How does Usain Bolt run so fast?

Anette Hosoi of the Massachusetts Institute of Technology, a leading researcher in mechanical engineering, believes that Bolt’s physical powers verge on the super-human.

“Usain Bolt is unique in that somehow he is able to get the top acceleration, and maintain the top speed,” she told NBC.

Bolt is 6ft. 5in, a height that should by rights put him at a disadvantage.  It does mean he tends to start races slower than his competitors but once he’s moving, Bolt’s mass gives him momentum and he takes fewer strides than other runners.

Off the beaten path in Tassie: We road-trip through Tasmania’s breathtaking landscape

Share house hunt: From finding the right housemates to avoiding scams, here’s how to find the right London home for you