Love music, hate instruments? Well, the most inventive and brain-scramblingingly talented beatboxers come together for this eighth annual all-day face-off. The afternoon holds the judge-scored heats, before the evening’s battles.

Defending men’s champ Ball-Zee will fight it out in a 40-strong competition, while women’s top seed Grace Savage is looking to keep hold of her title. In the team category Hobbit and Marv-III return with stiff competition from Subsonic and Micbsounds, SidFx & Beatfox and more.

Coming to America is 25

And this will be celebrated with a special one-off screening of the Prince of Zamunda’s arrival in New York. There’s a quiz on the Eighties flick that made Eddie Murphy a star, a barbershop quartet, rosebearers, African dancers and more. No word on whether there will be any McDowell’s burgers, though.

This newly opened exhibition looks at the role that war and battle has in children playing.Everything from toy guns to strategy games, such as Battleship and Cowboys and Indians even, show that violence is not so much about nature as it is about nurture. The Early Learning Centre would approve.

The third art and activism festival ponders what is broken in our world and what we can do to change our future. Highlights include documentary Oil City, which looks at the gloopy black stuff’s hold over us, while poet Tom Chivers’ Land Shift explores the changing geography of the world. 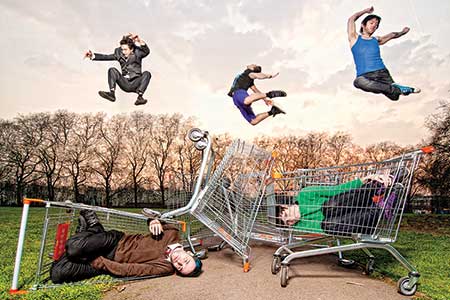 Does ballet make you think of tiny little ladies in tutus spinning around? If so, this show at the Watford Palace Theatre from Aussie choreographer Shaun Parker will blow that idea out the water. Part dance, part ballet, part outdoor spectacle and part lunacy, it’s a ballet about five shopping trolleys that is told through acrobatics and contemporary dance set to an electro-acoustic score. Epic!

Australian musician Mike Gill returns with this impossibly fun and Antipodean-welcoming open mic night showcasing the finest Brit and Down Under unsigned talent. So pick up the guitar – or sit down at the piano – and show them what you have got. Could be the start of a whole new career!

Pretension can be good sometimes, and to prove this Yoko Ono curates the 21st annual installment in the Southbank Centre’s offbeat music fest. This year, the likes of Thurston Moore, punk turned insurance plugger Iggy Pop, pain-fucker Peaches and indie oddballs Deerhoof are among the eclectic line-up.

The best circus and cabaret events in London

Viduka welcomed back to Socceroos’ camp