Cocktail in one hand, ping-pong paddle in the other; this is the kind of sport I could get used to. This is Bounce, London’s first social ping-pong club and it’s built on the exact spot in Holborn where the game was first patented in 1901.

Concocted by Adam Breeden and Dov Penzik, who co-founded All Star Lanes, Bounce looks set to follow the tenpin bowling clubs as a hip night out with a nod to physical activity.

“People are always looking for something different to do aside from a standard bar, club or restaurant, and when you provide an activity which everyone can engage in, people just seem to have more fun,” Breeden says.

Bounce is a stylish affair, designed by Russell Sage (The Hospital Club and The Savoy).

A 40ft-long central cocktail bar and a gourmet pizza restaurant overlook 16 ping-pong tables, from which comes the ever-present, rhythmic sound of balls being batted to-and-fro.

If you really want to push the boat out, there’s a private room for hire with its own cocktail bar and DJ booth.

Bounce is part of a growing ping-pong trend in London, which has seen too-cool-for-school venues, including The Book Club in Shoreditch and Rich Mix in Bethnal Green, host regular  table tennis tournaments.

“Since the early Eighties, London has been starved of table tennis tables as people’s houses and workplaces shrunk and communal places have closed down,” Breeden tells us. 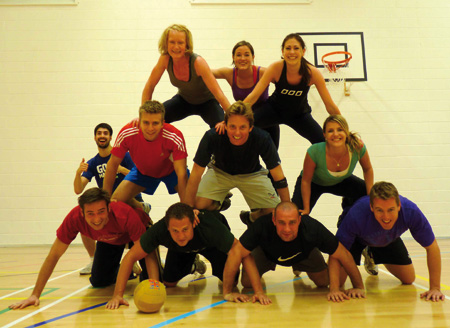 “Recent charity initiative Ping, which put tables in public spaces up and down the country, has proved a catalyst in engaging people with the sport.”

But ping-pong isn’t the only game bringing people together in London. Champion of after-work sports leagues and social events,

Go Mammoth offers the chance to play dodgeball, basketball, softball, netball, football, hockey, touch rugby, ultimate fribsee and, in 2013, inner tube water polo (where players float around a pool in rubber rings), helping Londoners to get fit while they socialise.

“A large majority of our players are young professionals wanting some after-work activity or expats getting involved with a sport they played back home.

Our social leagues appeal to single people and those who are new to London, as they’re a very natural way of meeting people with similar interests.”

For busy Londoners, making new friends at the same time as exercising makes sense, and there are endless clubs to choose from offering even the most traditionally solitary activites, such as running, as a group experience.

Social sports clubs may work you hard, but they’re great for gaining new skills, pushing yourself and mounting a resistance to sofa-bound catatonia after a tough day at the office.

Plus, it’s not unusual for a sweaty session on the pitch to end in the pub. Getting fit has never been such fun.

Go Mammoth. Individual / team fees from £20/ £125 for a minimum of five games.
Across London | gomammoth.co.uk

Scott Pollock – Gang Bang liaison: Man in the USA arrested after leaving his ‘business’ card at a hotel