Madonna posted a spoof apology to the hydrangeas she “loathes” on Youtube, but ends the clip by stamping on the flowers, ranting, “Fuck you! I like roses.”

Madonna found herself in the spotlight for disparaging a fan’s offering of flowers at the Venice Film Festival. The W.E. director was caught on camera grumbling: "I absolutely loathe hydrangeas" after being presented with a bunch of said blooms.

Now, the Material Girl has made a piss-taking video, called Madonna's Love Letter to Hydrangeas, and uploaded it to Youtube.

Shot in old-fashioned sepia like a silent movie, the video shows the 53-year-old gently cradling a bunch of flowers. 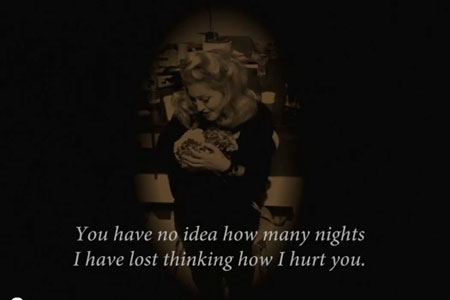 Madonna is overcome with emotion as she apologises to the flowers.

As Nino Rota's The Godfather Waltz plays, words flash across the screen reading:

"You have no idea how many nights I have lost thinking I hurt you.

"Words cannot express how sorry I am. To think I may have caused you pain. My heart is going to burst with sadness, I need to know in time you may forgive me.

"If I could take back my words I would, but I can't, so what am I left with?" 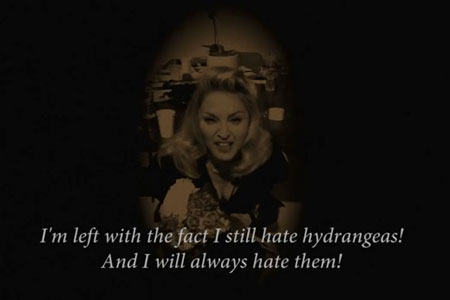 Don't mess Madonna around with hydrangeas.

However the video ends with Madonna shouting into the camera.

The subtitles read: "I'm left with the fact I still hate hydrangeas! And I will always hate them!

The star then tramples and stamps on the flowers and storms off. 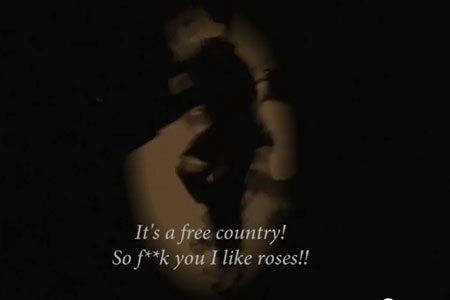 Only at the end of the clip does the star make known her true feelings.

In fairness to Madonna, she received the bouquet gracefully at the Venice Film Festival, thanking the fan before turning to her friend to say, “I absolutely loathe hydrangeas.”

Adding: “He obviously doesn’t know that."

Madonna was at the Venice Film Festival press conference for her new film W.E., based on the life of Wallis Simpson, whose relationship with Britain's King Edward VIII led to his abdication in 1936.

And here's the clip which sparked the storm.

In other Madonna news, the stalker who broke into the singer's house also raided Guy Ritchie's Wiltshire home last year.

Grzegorz Matlok broke into Madonna's £10 million mansion in Marylebone, London, in March, stealing a can of Red Bull and sitting on her bed.

Yesterday, a court heard that Matlok had previously entered Guy Ritchie’s house where he tried on the director's clothes.

Cycling and Hiking in Cowboy Country!