Matador gored through throat by bull

Spain’s most famous matador, Julio Aparicio, has been gored through the throat by an angry bull.

Aparicio was rushed to hospital and has had two operations but doctors say he will survive.

Surgeon Maximo Garcia Padros explained: “The horn went through his tongue and penetrated the roof of his mouth, fracturing the jawbone. We don’t have a reason to fear for his life, although he will have a very slow recuperation.”

It all went pear shaped for Aparicio when he lost his footing and fell to the ground during a bull fight. The injured bull charged and gored him through throat.

Things didn’t turn out too peachy for the bull either who was, of course, later killed.

Not everyone is convinced that there’s still a place for sports that involve the torture of animals. peta.org.uk 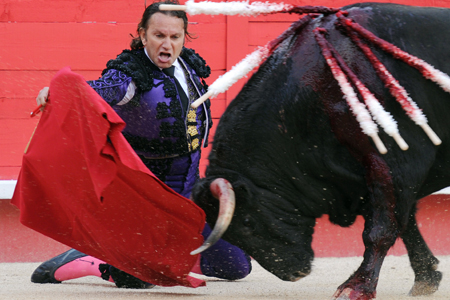