Henriques  was impressive for his 68, which helped the tourists to seven for 316 when stumps were called at MA Chidambaram Stadium.

The Aussies were in a spot of bother at five for 153 courtesy of an on-fire Ravichandran Ashwin (6/88).

But Clarke and Henriques put the first day at evens with a 151 sixth wicket partnership.

There will be no sympathy for the Indians after Clarke was given a reprieve on 39, with his side on a sub-par five for 206, when he clearly got willow on a ball from Ashwin which popped to Cheteshwar Pujara at short leg.

Umpire Kumar Dharmasena didn’t hear or see the contact, so gave it not out.

No video review was available because the Indians refuse to use it.

Clarke rubbed salt into the wound by whacking a boundary to bring up his century from 168 balls.

Henriques, 26, got a baptism by fire but was carrying a big hose – he posted 50 from 101 balls in his part of the rescue effort. 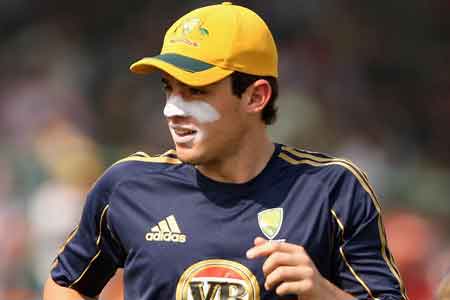 It takes a bigger performance than that to take the spotlight from Clarke though.

His 1595 runs at 106.33 in 2012 appears a distant memory to the focussed 31-year-old. His reaching eight took him past the Don, then he past the amount of runs his former leader reached at the same stage of his career.

Clarke’s decision to bat was easy on winning the toss, and Ed Cowan appeared out of character smashing Harbhajan Singh for six, but was gone balls later for 29.

David Warner (59) and Shane Watson (28) looked dangerous but both fell LBW to Ashwin, the same means of dismissal for keeper Matthew Wade (12) and eventually Henriques.

Phil Hughes (6) played the impressive off-spinner on trying to cut.