Michelin moola: There’s good money to be made working at London’s poshest restaurants

“There is never a day that I walk away and think, ‘Well, that was uneventful,’” says Sid Clark, the general manager at Gordon Ramsay’s Maze in Mayfair.

As one might expect from a restaurant helmed by a celebrity chef, London’s rich and famous often flock to Maze for sustenance (the Beckhams have been known to stop in for a nibble, as have the likes of Desperate Housewives’ Eva Longoria).

Jonathan Krauss, the assistant manager at food, drink and entertainment venue sketch’s Martin Creed-designed gastro brasserie, The Gallery, admits that his position occasionally allows him to network among Britain’s power set. “We have a large clientele, which leads to networking,” he explains. “You can make some great contacts here.”

As big-name artists redecorate the restaurant every 18 months, Krauss notes, The Gallery is a good place to talk art and feel creative: “We have established painters that come in, as well as young people with funky new ideas. It’s a wonderful place to discuss how the art world is moving forward.”

While items such as foie gras and truffles rarely make it into the staff meals, restaurant employees are regularly treated to menu tastings, another significant perk of the job.

“[Tastings] are important,” Clark notes. “It helps the staff to speak about each dish with knowledge and gives us a perspective on the guest experience.” 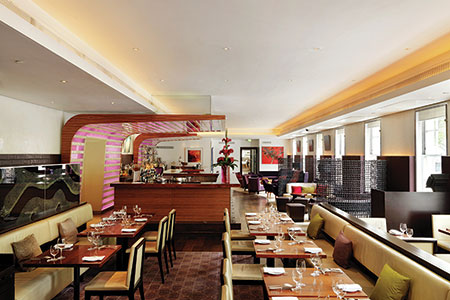 As clients are paying for seamless quality, presentation is key for everyone working in a high-end restaurant, from the waiters to the person checking the designer coats.

“It’s important to always look neat and not wear too much make-up,” says Lina Stalaucinskaite, 24, a receptionist at L’Atelier de Joel Robuchon in Covent Garden.

Attention to detail and a winning personality also work wonders for moving up the ladder quickly.

“It doesn’t matter what kind of restaurant it is, a great attitude towards work is the most important thing,” Clark says.

“All the rest you can teach, but attitude is part of someone’s character. That’s the major spark we look for in trial shifts.”

Krauss, like many managers, started out as a waiter. He explains that promotions at swanky restaurants come quickly to those that work for it.

“This industry is wonderful for people who are ambitious and motivated,” he says. “It only took me four years to work my way up to management.”

As tips are only bestowed on service that excels, there is as much a financial imperative as a professional one for turning on the charm.

“This is the one business where tipping is practically an obligation,” Krauss notes. 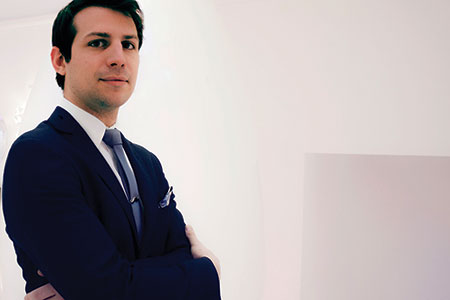 “At several stages of interaction with the guest, tips will be handed out. Naturally, a very smiley and warm person in the cloak room, or on the floor, will get more tips than someone not as dynamic.

”The practice of tipping makes salaries incredibly variable, though Krauss (above) estimates waiters will pull in up to £30,000 a year, while managers (whose income is more steady) can earn £40,000.

Stalaucinskaite says that while the tips she earns in reception alone wouldn’t pay her rent, “they’re enough to cover your bases so you can go out and spend some money for yourself”.

“Restaurants want security and to know that you are committed to what you do for a period of time, and that you’re not going to leave at the drop of a hat,” he says.

“If you want to run alongside a different career path, this job’s probably not for you.”Naturally, service experience helps when trying to land a job at London’s posher establishments.

“Even for experienced waiters, Clark warns, there might be an element of backtracking.

“You may have to take a step backwards to get into the right restaurant,” he says. “But if you work hard then you will soon progress.”

The key to promotion

Don’t shy away from hard work. If you take every shift offered, you’ll soon be seen as a valuable member of staff, says Krauss.

Also, don’t be afraid to propose new ideas, even if you’re not yet in a management position.

Finally, keep smiling, and refrain from being known for complaining.

A Legacy of Liberation