Jessie J was the MOBO's undisputed queen last night, scooping four gongs and dedicating her multiple win to the fans she dubs her 'Heartbeats'.

Watched by 250million viewers, Jessie J said she felt “excited and humble”, claiming tearfully she hadn't expected to win even one award.

The MOBOs 2011 were held in Scotland, where fans braved the rain to catch sight of stars glamming it up along the red carpet. The ceremony was hosted by a slick Alesha Dixon and Jason Derulo.

No other artist last night came close to the 23-year-old's quadruple glory, after she was awarded Best Song, Best Album, Best Newcomer and Best UK Act.

Dressed in a sheer black dress, the singer performed Do It Like A Dude for the celebrity-packed audience.

"This time last year I was sitting watching this show alone in my living room. I've gone from being virtually unknown to winning four awards tonight,” she said.

“That is epic. Thank you everyone." 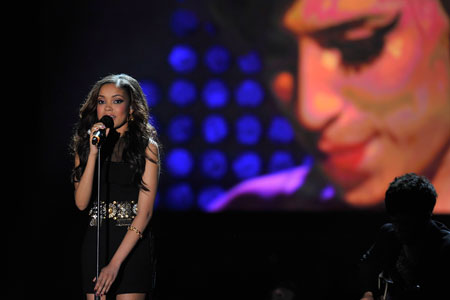 Dionne Bromfield pays tribute to Amy Winehouse at the MOBOs

Another high point of last night's MOBO ceremony was attribute to Amy Winehouse from her goddaughter Dionne Bromfield.

Wearing a necklace that once belonged to Winehouse, 15-year-old Bromfield belted out a version of her godmother's Love Is A Losing Game. The song received a standing ovation and many of the audience were moved to tears.

“Amy made a huge impact on the music industry – we want to honour and celebrate this and the special tribute from Dionne is sure to be an emotional and moving experience for all involved."

Other awards went to Rihanna, who won Best International Star and Tinie Tempah, who landed the Best Hip Hop accolade.

A blast from the past came from 90's band Boyz II Men, who were awarded Outstanding Contribution to Music.

NZ set up the challenge for Bangladesh