Sandy’s impact was felt from Carolina in the south to Canada, but was most strongly felt in New Jersey, which bore the brunt of the high winds and storm surge. As many as 20,000 people were left stranded by flood waters in the town of Hoboken, NJ, just across the Hudson river from Manhattan island, whom the National Guard has now arrived to evacuate.

“You guys are in my thoughts and prayers,” President Obama said when visiting an emergency shelter in Atlantic City on the New Jersey coast.

“We are going to be here for the long haul,” he promised.

An estimated six million homes and business across the north east enter the third day with no power, with a third of these being in New Jersey alone. In New York City, transport still remains largely suspended after a record tidal surge swamped much of the Subway. Fifty homes were burned to the ground in the borough of Queens, NY (above).

The damage caused is estimated to run in to the tens of billions of dollars, with President Barrack Obama putting his election campaign on hold temporarily in the wake of the storm. 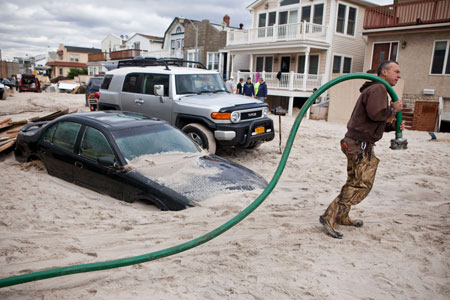 The clean up starts in Long Beach, NY.