On tour with The Jezabels: TNT jumps in the tour bus through Europe’s coolest cities with Sydney’s hottest band

The Jezabels don’t know it, but I’ve travelled with them before.

Their debut album, Prisoner, and earlier EPs were the soundtrack to my summer, the haunting, gothic pop-rock thundering through my headphones on practically every journey I took.

I was completely hooked.

So when the chance came to join them on the last leg of their world tour last month, travelling through Portugal and Spain’s coolest cities and watching The Jezabels perform in Europe’s top music venues to a new, rock ‘n’ roll-hungry crowd each night – well, I couldn’t have packed my bags much quicker.

The Aussie four-piece have been on quite a journey of their own since they banded together at Sydney University in 2007.

They’ve been developing the unique sound they describe as “intensindie” ever since, and this year have toured the world, a trip that culminates in these European dates, supporting the legendary Skunk Anansie.

I took them with me on my journeys. Here’s what happened when they took me on theirs. 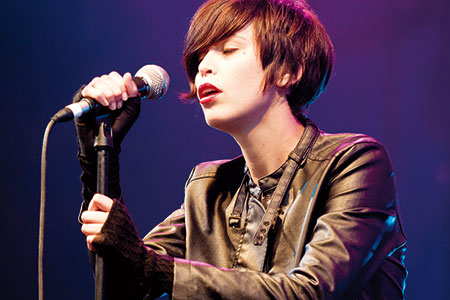 I’ll admit it, I have a case of butterflies as I navigate my way through the winding streets of Lisbon, to the Coliseu dos Recreios – to meet The Jezabels for the first time.

This is a very feisty city: as I hurry through the lively streets I notice drug dealers loitering among the stunning, 16th-century architecture, offering their wares to any passer-by.

I’m eager to meet the band, though, so rather than exploring further, I wander past and soon find myself backstage.

I’m walking through deserted corridors looking for the dressing rooms when I bump into the band’s keyboardist, Heather Shannon, and guitarist, Sam Lockwood, peering expectantly into the majestic, historic auditorium of the Coliseu – a stage they’re due to storm a few hours later.

About an hour later, I find myself just a few feet away from the band as they launch into their first song – they’re captivating to watch.

Out there in the auditorium the crowd is going wild – everybody is loving it. I pinch myself to check this isn’t a dream.

When we all pile backstage after a phenomenal set, there’s bottles of champagne waiting for the band: a ‘Welcome to the tour’ present from the headliners, Skunk Anansie. 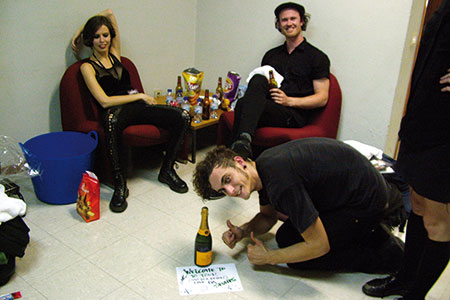 Waking up on a tour bus with a band you love sleeping peacefully around you is one of the stranger ways to start a day, but even 24 hours in, I’m already in the swing of things, unfazed by Skunk Anansie’s lead singer Skin walking by with a cup of green tea.

I’ve seen The Jezabels’ drummer Nik Kaloper demonstrate his uncanny ability to catch snacks in his mouth countless times. And I’ve been told in no uncertain terms, “do NOT shit on the bus”.

I spend some time chatting to lead singer Hayley Mary in between soundchecks  and ask her how she feels about all the travelling.

“It’s a bit of a non-reality, but it’s the fans that keep us grounded” she says.

“In some ways you get more in touch with the world, but in others you’re less in touch, because you don’t have a home and it’s having a home that gives you your sense of culture.

Sometimes I’ve had a strange feeling, like the opposite of homesick, where you have no idea where you are or what you’re doing, but it’s very exciting – the fluidity of it.

”We arrive in Porto, an industrial-looking city that at first glance seems full of concrete and unromantic architecture.

But the part of town around the grand old Coliseu do Porto, where The Jezabels have a gig later that night, turns out to have real character.

It’s another energetic set, and though supporting Skunk Anansie means impressing a new breed of fans, this crowd is definitely won over. 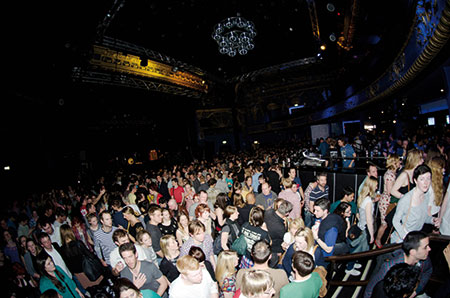 Parts of Madrid, with its winding back alleys and steep cobbled streets, makes me feel as though I’m in a small hill town, as I wander about on another lethargic afternoon – the band are almost always too tired to see the cities themselves.

As Sam tells me: “We’ve been to Paris three times and never seen the Eiffel Tower.”

Turns out to be a good job they’ve saved their energy, as La Riviera is a much more intimate venue than they’ve played so far.After the show there’s a huge buzz as the band pose for pictures and shake hands.

A couple of die-hard Jezabels fans – Tane and Anneka – take us out to a trendy local watering hole, Bar Mostro, and they are clearly on cloud nine to be out with their favourite band.

We carry on the party back on the bus, and I eventually crawl into my bunk in the early hours of the morning full of the roadie’s whisky and lulled by the gentle hum of the vehicle. 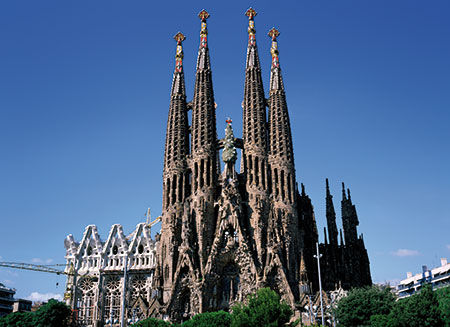 Barcelona is known for having a raucous music scene, and The Jezabels are playing the city’s famous Razzmatazz venue, which is a very big deal – The Stone Roses and Blur have played here in the past.

I’m feeling the burn from last night, but that melts away as the band rocks the stage again.

All it takes is a few notes from Heather’s keyboard at the beginning of Hurt Me and the shiver down my spine gets the adrenaline going again.

Together they fill Razzmatazz with a dark, formidable charisma, sealing the tour as having been a resounding success.

Later, Hayley says: “We’re somewhere in between innocence and success now, a transition phase. I think we’ll look back at these days as being some of our best.”

Benedict’s flights were courtesy of Skyscanner: 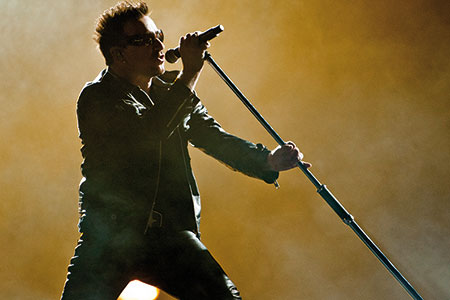 Four days in Europe is just a drop in the ocean compared to some rock tours. From the insanely big to the just plain insane, musicians have done it all on the road. These are some of greatest tours in music history.

1. Ozzy Osbourne and Motley Crue,Bark at the Moon Tour, 1984

Ozzy was going solo that year after a tumultuous tour with Black Sabbath, but he certainly didn’t keep a low profile.

One tale from the road goes that when the legendary wild-child of metal asked for a line of cocaine from Motley Crue bass player Nikki Sixx, only to find out there wasn’t any left, he improvised by getting down on his hands and knees with a plastic straw and snorting a line of ants marching down the pavement.

Later Sixx said: “From that moment on we knew there was always someone who was sicker and more disgusting than we were.”

Stories had gone around for a while about Keith Moon’s love of destruction, and by the time The Who reached the US, there wasn’t a hotel room safe from Moon’s own signature demolition technique – a lit stick of dynamite shoved into a toilet

.But it was the band’s stay in Flint, Michigan, at the Holiday Inn, that sealed his almost god-like reputation for mayhem.

He celebrated his 21st birthday with the usual (dynamite-induced) bang, driving a Lincoln Continental – or a Cadillac depending on who’s telling the story – into the hotel swimming pool to a stunned crowd of partygoers.

The Irish mega-band racked up the biggest tour in the history of music between 2009 and 2011.Over the two-year period, U2 played 110 sold-out shows worldwide.

More than 7million fans came to see them play, paying more than US$700m (£435m) for the privilege, a record gross income for a music tour by any band.