South African athlete Oscar Pistorius was wearing a black suit on Friday morning as he was led by police officers to the courthouse where he is to face a murder charge after his girlfriend was found shot dead in his apartment in Pretoria.

The courtroom was packed with observers, including members of the international media, with the death of model Reeva Steenkamp, 29, shocking sports fans around the world.

Pistorius, 26, was moved in the morning from a police station where he spent the night in a cell to the Pretoria Magistrate’s Court.

The once media-friendly sprinter covered his face with a jacket as the police transferred him. He was expected to apply for bail, though police have said the state will oppose the application. 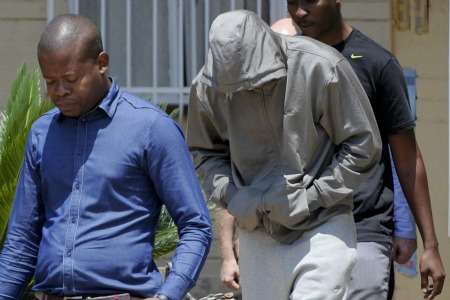 Pistorius broke down in tears in court as he faced the charges “Take it easy. Come take a seat,” the judge told the Olympic and Paralympic athlete.

Some details on the shooting have emerged in court. Judge Desmond Nair has used the phrase “a person charged with premeditated murder”.

Pistorius’ defence team requested that they be given time to prepare their case. The court heard that Steenkamp had been shot 4 times.
“I accede to the request by the defence for a postponement until next Tuesday.” said Judge Nair, who then dismissed Pistorius who walked out of court. He will be held at Brooklyn police station in Pretoria, South Africa.

Pistorius has denied being responsible for the murder of Reeva Steenkamp in the “strongest terms” and has offered “deepest sympathies” to the family of her family.

A statement from his family and management company said Pistorius would “like to express his thanks through us today for all the messages of support he has received – but as stated our thoughts and prayers today should be for Reeva and her family, regardless of the circumstances of this terrible, terrible tragedy.”

Neighbors said they heard loud noises from Pistorius’ apartment in a secure upmarket complex in the South African capital in the early hours of Thursday morning.

Police arrived to find Steenkamp shot four times, and paramedics declared her dead at the scene.
Beeld newspaper reported, quoting a resident, that police were called to Pistorius’ home two hours before the shooting of Steenkamp after neighbors heard an argument.

However, an early report indicated Pistorius might have mistaken his girlfriend for an intruder.
“He is emotional, but he is keeping up,” lawyer Kenny Oldwage said on Thursday evening.

Relatives of Steenkamp and Pistorius were to be present in the courtroom during the first hearing for the Paralympian sprinter known as “Blade Runner” because he uses carbon fiber prosthetic blades to sprint.

In London last year he became the first double amputee to compete in the Olympic Games. He had previously won numerous gold medals in the Paralympics. 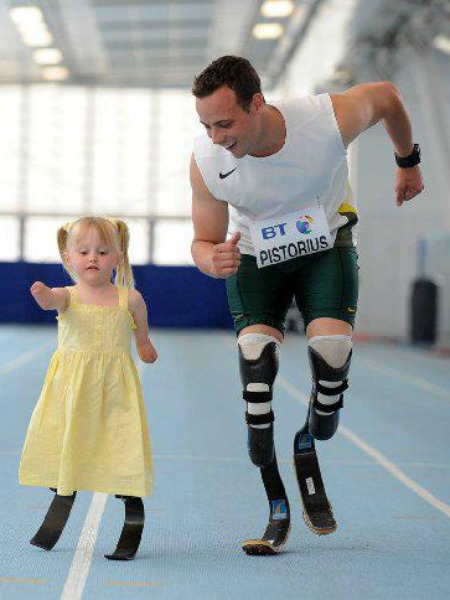 The athlete has numerous sponsorships from brands such as Nike. South African private broadcaster M-Net dropped an advertisement featuring Pistorius after Steenkamp’s death.

Johannesburg-based political analyst Justice Malala commented in yesterday’s Guardian “For us South Africans, and for many across the globe, it is impossible to watch Oscar Pistorius run without a stir of emotion, without wanting to break down and cry and shout with joy. Pistorius is no ordinary hero: he is that rare thing, a man with an almost-impossible narrative.”

“It is not a rags to riches story, a poor boy made good – we have many of those here and on the African continent. His story is more intense. To be without legs, and to become the epitome of excellence in the very field where you are not supposed to excel: that is the stuff of legends.”

Twitter users in the UK have reacted angrily to The Sun’s decision to publish pages of model Reeva Steenkamp from bikini glamour photo shoots, with the hastag #HerNameWasReevaSteenkamp trending. A petition calling for an apology signed by hundreds of people so far.

“The complete disregard you have shown for Reeva by plastering a picture of her in a bikini, whilst reporting her death, is inhuman and repugnant.” states the open letter to The Sun.

Images via Getty
Video via The Daily Telegraph / YouTube

The Quick And Easy Path To Learn How To Invest