From the fjords to the northern lights, Norway has plenty of outdoor charms to make it an attractive short-haul destination. Until now, the country’s capital, Oslo, has rarely made it onto Top-10 style lists of European cities, but it’s an oversight on the part of journalists: it’s an attractive, easily accessible place with plenty to see, and as the krone has fallen steadily against the pound in recent years, it’s an increasingly affordable weekend break.

Oslo was founded in 1040 on Norway’s southern shore, but it wasn’t until the 17th century, after numerous city fires, that the modern city was built in the area around Akershus Castle. Lining two bays, and with 40 islands within the city limits (and scores more around the fjord), Oslo happily straddles both land and water, and is consequently picturesque in all seasons.

What might come as a greater surprise, however, is that in recent years Oslo has been positioning itself as one of the foremost centres for contemporary art in Europe. Not only is it home to some stunning contemporary galleries and an extraordinary art hotel, but street art and sculptures are popping up all over the place, so whether you’re visiting on a dedicated art trail, or stopping by for a few days on business, you’re certain to be surrounded by creative expression.

The lynchpin of Oslo’s contemporary art scene is the Astrup Fearnley Museum of Modern Art, which moved to its current location – two dramatic glass and timber structures designed by the architect Renzo Piano – in 2012. The collection includes thousands of contemporary artworks by Norwegian and international artists, especially from the 1960s to the present. Big names such as Francis Bacon, Andy Warhol, Damien Hirst and Jeff Koons are all well-represented, and highlights include Koons’ 1998 porcelain sculpture, Michael Jackson and Bubbles, which the museum purchased for more than US$5m. 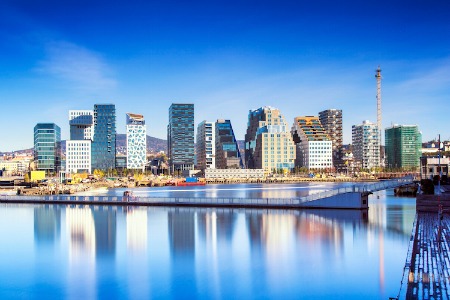 Immediately opposite, and with a contemporary art collection to rival any museum, let alone hotel, in the world, is The Thief. The paintings, sculptures and photographs on display here, from the Antony Gormley statue by the front door, to video art installations by Charlotte Thiis-Evensen and album covers by Roxy Music’s Bryan Ferry, fill every space in the hotel, and guests often rightly spend hours exploring the corridors and other public spaces, wondering which masterpiece will be around the next corner. Some of the most famous, and impressive pieces are on show in Fru K, The Thief’s exceptional restaurant, where gastrophiles and art lovers alike compete for tables. Challenge yourself to identify the artists who’ve created the artworks, and to name at least one of the celebrities who is likely to be dining alongside you.

The Scream is undoubtedly the most famous artwork produced by a Norwegian artist, so you’d better take time to visit the Munch Museum, dedicated to the life and work of Edvard Munch. Opened in 1963 to celebrate what would have been Munch’s 100th birthday, you can see both The Scream and Madonna, a naked and somewhat controversial depiction of the Virgin Mary. Both of these paintings were stolen from the Munch Museum in 2004, but they were thankfully recovered by the police after a two-year hunt, and put back on display. A new display space for the Munch collection is under construction and should open on the waterfront alongside the Opera House in 2018.

If you prefer your art out in the open air, Oslo boasts two important sculpture parks. The Vigeland Park  has been created by a single artist, Gustav Vigeland, and contains some 200 works in bronze, granite and wrought iron. Vigeland was also responsible for the park’s design, which was laid out in the mid-20th century.

Newer and exhibiting the works of multiple sculptors is the opened in a woodland in southeastern Oslo in 2013. Here you can see sculptures by Rodin, Renoir and Dali, but also 21st century works in stainless steel, bronze, and marble by the likes of Dan Graham, Diane Maclean, and Lynn Chadwick. Entrance to the park is free, but there is a small charge if you want to take the guided tour or enter the Skyspace light installation.

If you want a quick getaway to Oslo this winter, Ryanair currently has flights from London Stansted from £32 return. If you can afford to splurge, check into The Thief (see above), but otherwise the recommended budget option is Vacation Rentals Club, which works on a model similar to Airbnb and has properties to rent across the city.