Trees along the road have been decorated with colourful pom poms and other knitted delights to brighten up the area and make it a more attractive to pedestrians.

A statement from Leicester police explained “The perception of crime is disproportionate to actual reported levels of crime and police and partners hope that by bringing the local community together to brighten up the stretch of Great Central Way, more people will use the walkway and the fear of crime will be reduced.”

Students from nearby De Montfort University were involved in the community project, as well as students from schools in the area and a group calling themselves the Knitting Guerillas from Birstall, who specialise in the art of ‘yarn storming’.

“I’m a great believer in bringing lots of different groups of people together to solve problems and this is a wonderful activity to demonstrate that together we can make a difference,” said Sergeant Barnes of the neighbourhood police force.

“I am really hopeful that the actions will reduce the fear of becoming a victim of crime, as the perception really is much different to the actual reported levels of crime.” 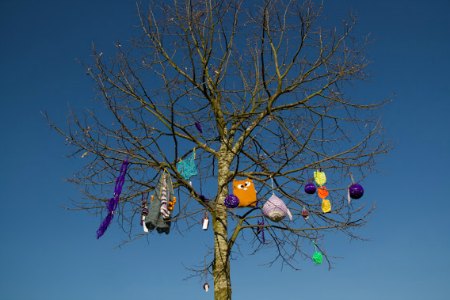 It’s not the first time the knitters of Leicester have come up to brighten up the town. Last February as part of TV channel Dave’s Leicester Comedy Festival, yarn bombers descended on the town in the early hours of the morning adding knitted decorations onto bollards and street furniture.

Main image via Knitting Guerillas from Birstall on Facebook

UK has slumped back into recession says OECD