The Queen touched down in Ireland today for the first day of her historic visit and is being guarded by 5,000 Irish police officers as protests kick off across Dublin.

As the Queen prepared to leave Irish President’s Mary McAleese’s home – the Áras an Uachtaráin – a crowd of protestors attempted to break through police lines before being brought under control.

The royal visit has been a security nightmare for the Republic Of Ireland. Last night, Irish Army experts defused a pipe bomb on a Dublin-bound bus. Police said IRA dissidents using a recognized codeword warned about the bus bomb, which was left in overhead luggage.

A second device abandoned near a light-rail station in west Dublin was deemed a hoax Tuesday morning. 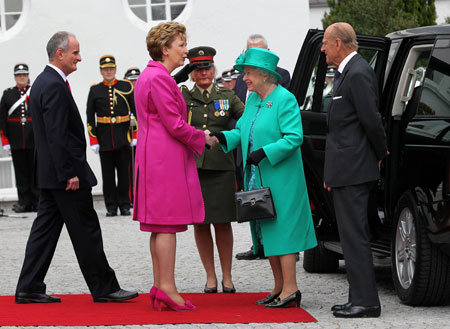 The Queen is greeted by Irish President Mary McAleese

Undeterred, the Queen forged ahead with her visit and earlier today shook hands with the President in front of the Áras before moving inside. God Save The Queen and Amhrann na bhFainn, the Irish national anthem, were played as a 21-gun salute sounded and an Air Corps flypast took place.

Most controversial in the Queen’s visit was her visit to the Garden of Remembrance where she will laid a wreath at the memorial, which commemorates those who died during the 1916 Easter Rising against British rule.

Some hard-line Irish republicans are furious about this “sacrilege” and object to the symbolic act of partnership between England and Ireland. 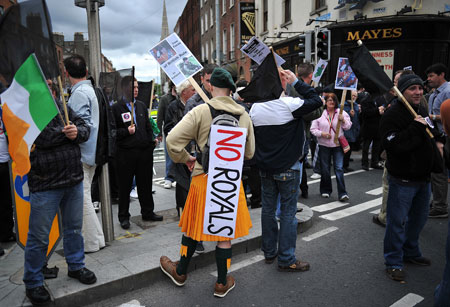 Dublin protestors make their feelings about the Queen’s visit to Ireland clear.

“No element of this week’s visit by the British Head of State has caused as much outrage as her planned visit to the Garden of Remembrance,” Cllr Minihan said.

“The monument is dedicated to all of those who have died in the struggle for Irish freedom. In other words, the garden is dedicated to those who have been killed by Britain – the same Britain that continues to occupy the Six Counties and the same Britain of which Windsor is the head of state,” she fumed. The Royal visit marks the first time a monarch has set foot in Ireland since it gained independence.”

Other protests have taken place throughout Dublin.

The queen is set to make a speech on Wednesday night at Dublin Castle, the former seat of British rule in Ireland.

London club: Ritual night returns to Under The Bridge on April 27

Seasonal jobs in NSW are under threat

Other traveller reviews on Serbia