Half-back Adam Reynolds pulled the strings while his big men did the damage – especially Sam Burgess – and flying Nathan Merritt continued his love affair with the tryline scoring a hat-trick on the wing.

Not known for being referees favourite team, the Bunnies were clinical kept cool heads in the ruck and at one stage led the penalty count 8-1.

Inglis was a shining light in a team of stars with his even more imposing frame involved in just about everything going forward for the red and greens.

South went into the sheds 16-4 up, after a fourth-minute try to new signing James Maloney, but it was all the Bunnies after that and the score didn’t match their dominance in front of 35,952 fans on a Thursday night.

While most talk ahead of kick-off was about Williams, his first major highlight was getting barreled by Burgess – he’d later get his own back though, showing there’s plenty for the highlights reels to look forward to in season 2013.

There was a bit of luck on the Rabbitohs’ side too, with Inglis pressuring Mitchell Pearce under a Reynolds kick, leading to a vintage falcon (the ball bouncing off his head) and a deserved try to Chris McQueen. 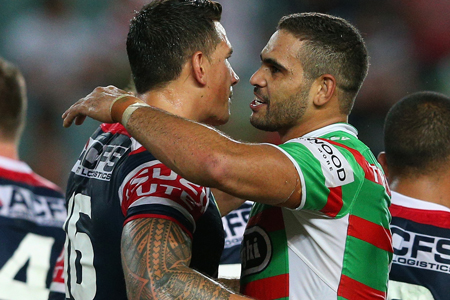 British A-Listers are applying for a second passport. Should you follow suit?