Road trippin’ Down Under

These days, so much travel is all about the destination and getting in and out as quickly as possible. And you can understand that – if you only have limited time off work, you need to fly in, enjoy yourself and then get home in time for the daily grind to begin all over again.

There are some destinations however that lend themselves perfectly to an epic road-trip, where the getting-there is as important as the end result. On that sort of trip it really doesn’t matter how long it  takes. That’s what a road trip is all about.

And guess what? There’s nothing like exploring Australia by road and it is home to some absolutely spectacular routes, although the road network is not always the best – many are rough, ready and seemingly unending (where’s your sense  of adventure?).

The must-dos include the Great Ocean Road in Victoria, Queensland’s Savannah Way and the Nullarbor, driving from Adelaide all the way to Perth (it’s an epic!).

And the cousins across the Tasman have their fair share of cracking routes as well – but of course, you won’t be able to get your rental car all the way over there (so it’s good job there are loads of NZ hire car companies isn’t it?). From Queenstown, a popular winter hang-out for those keen to smash the slopes, Milford Sound is a couple of days’ drive away and one of the country’s top attractions. And if you’re on the North Island try Paihia to Auckland. Start your engines…

GREAT OCEAN ROAD
Is the Great Ocean Road really that great? Er, YEAH… it’s not called GREAT for nothing! Originally built by returning veterans as a memorial to those who died in WWI, it’s beautiful coastlines make it one of the most photogenic stretches of tarmac on earth and an absolute must-do. 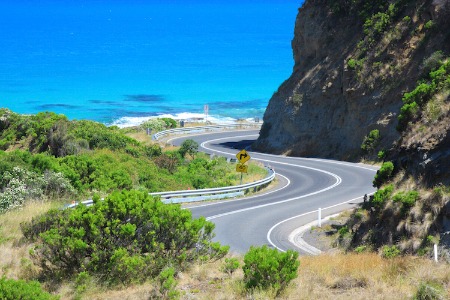 Driving south from Melbourne, it takes about an hour to get to Geelong and then you head along the coast to Torquay. Even if it’s too cold for you to take a dip in the  ocean (it is winter), there’s still plenty to enjoy and it’s the official start of the Great Ocean Road (as well the unofficial home of the nation’s surfing capital). Torquay oozes cool and you can’t not go to Keanu Reeves, erm, we mean the iconic Bells Beach – sorry, the image of Keanu on a surfboard has been carved into our memory ever since watching Point Break. Well, sort of. You see, Bells is supposedly one of the locations of the movie but it isn’t. The beach at the end where Patrick Swayze rides “the wave” is meant to be Bells, but it was actually filmed in America to save money (tight!).

Anyway, get down to this surfing mecca and try and catch a few ways at one of its quality surfing sports, enough to build up an appetite which you can satisfy at Bomboras with a few pizzas (bomboras.com.au) and then celebrate the day’s achievements with a couple beers at Growlers (growlers.com.au), one of the Surf Coast’s favourite waterholes.

Down the road in Lorne and Apollo Bay, you’ll find even more unspoiled beaches. Apollo Bay acts as a popular base camp for Great Ocean Road explorers with the Apollo Bay Hotel (apollobayhotel.com.au) naturally taking on the role of HQ. Right in the heart of town, the hotel holds prime position overlooking the bay and is the epitome of an Aussie beachside pub. The al fresco dining area and relaxed indoor bistro serve up authentic pub grub with some Asian alternatives mingling in with the Parmigiana and fishermen’s baskets. With classically simple beer garden decor, the foreshore watering hole needs nothing more than some sunshine and a salty sea breeze to transport you to never-never land.

The route then takes you inland through Otway National Park and lush rainforests. Check out the Otway Treetop Walk (otwayfly.com), a unique attraction which features the 600m long and 30m high steel structured treetop canopy walkway that enables you to experience the sensation of being high above the forest floor.

Once you’re done with the trees, head back on the road for some dramatic cliff landscapes between Princetown and Port Campbell, where you’ll visit the famous rockstars the Twelve Apostles (there are actually nine), the towering limestone stacks off the coast. Check out the fishing village of Port Fairy before heading back towards Melbourne via the Grampians (or you can keep going west and hit up Adelaide). PS, there’s another reason the Great Ocean Road has such a grandiose title – and with little gems spotted along the iconic bitumen – the stunning drive easily turns into the Great Ocean Pub Crawl! visitgreatoceanroad.org.au

THE SAVANNAH WAY
This stretches right across the country from Cairns to Broome and is one of Australia’s most intriguing national drives. The 3,700km trip links 15 national parks and five World Heritage area and is recognised as one of Australia’s top 10 drives with a reputation as the “ultimate unique self-drive adventure”. Don’t believe us? Well numbers don’t lie and each year about 40,000 travellers hit The Savannah Way, and about 85% of those are Australians.  From Cairns, the tropical rainforests give way to the food bowl of FNQ, Atherton, where you’ll find the Undara National Park (undara.com.au). As you head west you reach Ravenshoe, Queensland’s highest town. We have to tell you to also head to Mt Surprise. It’s a tiny town where you’ll be able to experience the Undara Lava Tubes – the longest and largest lava tubes in the world and a geological wonder providing insights into the ever-changing climate of the past 200,000 years. From there, head to Cobbold Gorge (cobboldgorge.com.au) and try for gold in Georgetown before heading onto Normanton, the home of Krys the 8.63m “King of the Savannah” (actually it’s a statute of Krys, who is the largest recorded saltwater croc ever killed). From Normanton it’s onto the Barramundi capital of Australia, Burketown and then onto the spectacular Katherine Gorge and Katherine, from which you can continue through the Kimberly region and out to Broome or you can head north to Kakadu and Darwin. The choice is yours and probably depends on how much time you have.
savannahway.com.au

THE NULLARBOR
This one is another epic and you shouldn’t tackle it unless you have at least a week up your sleeve.  You can go in either direction but if you’re starting in Adelaide, it’s worth swinging past Port Lincoln before embarking on your excellent adventure, which only officially begins once you leave Ceduna, which is the last of the ‘big towns’ you’ll see before getting across to the other side. Known as the gateway to the Nullarbor Plain, the seaside hamlet offers views of the Eyre Peninsula and the Southern Ocean. Stop at the Ceduna Foreshore Hotel (cedunahotel.com.au) for a beer and views of the town’s jetty. From there on, you’ve got a 1209km drive and although you’ll encounter small clusters of houses every few hours, there are no real population centres until you get all the way to Norseman in Western Australia.
Indeed, the Nullarbor is a treeless arid expanse and looks like something from Mad Max but that’s a good thing because perhaps the best part of this trip is that no matter where you stop, everyone is up for a chat: They want to know what you’re up to and where you’re headed (most of the people you’ll meet will be backpackers in search of an authentic Australia experience). Take the tiny roadhouse community of Cocklebiddy in WA as an example. It has a population of eight people, 25 budgies, seven quails, a dog and a million kangaroos – brilliant, right? You should also know that almost every service station in the Nullarbor comes with a bar, restaurant and motel rooms for exhausted drivers – and the South Australian ones even have pokies (poker machines).
nullarbornet.com.au

QUEENSTOWN TO MILFORD SOUND
If you’re heading to NZ to make the most of the snow then odds are you’ll be spending a bit of time in Queenstown, the adrenaline-junkies’ playground. But instead of just hunkering down for the whole season, make the circuitous trek to Milford Sound in the Fiordland National Park, which is a Heritage-listed marine reserve and one of New Zealand’s top tourist destinations. Head south through Kingston and Lumsden – they have rolling pastures and stacks of great fishing spots – and then get round to Mossburn, the deer capital of New Zealand. Then you’re on the road to TeAnau, which is the main jumping-off point for Milford Sound but is a worthwhile destination in its own right.
fiordland.org.nz

PAIHIA TO AUCKLAND
If you want to, you could complete this circuit of New Zealand’s North Island in under 12 hours but, depending on how many stops you want to make and how far off the beaten track you’re prepared to venture, you could string your trip out over week or even a fortnight. Start off in Paihia, sailing, fishing or kayaking and then head around the coast to the Karikari Peninsula, where you can take a tour of New Zealand’s northern-most vineyard. Follow the road west to Awanui, a launching pad for an excursion into the far north. After that, it’s a straight shot down the west coast to Auckland, stopping off at Ninety Mile Beach in Ahipara and Maori enclaves in Kohukohu and Rawene. Also, the Kai Iwi Lakes are great for water skiing and swimming.
auckland.com

Does my bum look big in these glasses?