It’s not often I find myself locked in a pitch-black room. During the occasions I have, however, I’ve learnt a valuable lesson: don’t drink to­o much beforehand.

It’s a shame, then, that a failed exchange in Starbucks resulting in four – apparently irresistible – lattes has caused my sister Sophie and I to completely ignore my own wisdom. Now, as we fumble around in the darkness of the first stage of Basel’s Room Escape (roomescape.ch), essentially a real-life, Swiss version of TV game show Crystal Maze without Richard O’Brien smirking from the sidelines, there’s a new urgency to our need to secure release.

It doesn’t bode well to the website advice that “human logic, general knowledge and the ability to combine different clues correctly,” is what is required to escape. Especially when you also add that we’re only five minutes into our hour-long challenge, and already massively struggling to complete the first task set to us by Lukas Haas, one of the game’s founders. To be honest, I’m not even certain his instruction to “find the light” was meant to be one of the challenges.“Soph,” I say, deciding to give her a heads-up. “We’re doomed.”

We’d decided to try Room Escape after discovering it was Basel’s top tourist attraction according to Trip Advisor. The live-action puzzle game, where teams of up to six people must solve riddles and complete physical tasks within an hour to escape a locked room, has only been going for a few months. Yet within weeks of launching, it’d shot to the top of the travel review website’s ranking list, sitting above previous favourites including the city’s Fine Arts and Paper Mill museums.

While cynics might suggest that’s not that difficult, there’s no denying that these escape games are ‘in’ right now. Since the first – Parapark (parapark.hu) – opened in Budapest in 2011, there’s been a flurry of different versions and themes (medieval, horror, Ancient Egypt) cropping up in pretty much every major city across the world, with the Hungarian capital now home to more than 30 alone. What’s more, they’re each similarly flying straight to the top of ratings polls: usually sitting above world-famed galleries, theatre performances and historic landmarks as their destination’s number one tourist activity.

It’s no wonder, then, that Haas and friend Felix Erzinger – both engineers – saw a good investment opportunity after trying one for themselves. “We’d visited one in Lucerne and loved the concept,” Hass had explained to me earlier. “But, we knew with our engineering expertise we could do better.” How much better, we were about to find out…. 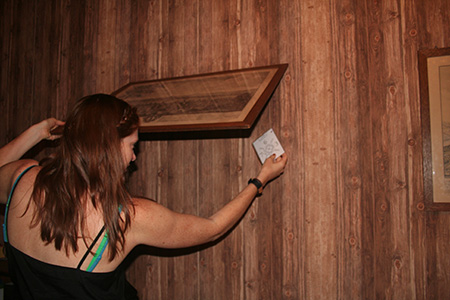 “Find the light!” a voice suddenly booms above, causing me to jump. The Game God, I think, ignoring the fact that he sounds a lot like Haas. “Ok, Soph, perhaps ‘find the light’ is actually an anagram which we need to unravel…”

“It’s on the left,” Game God interrupts, sounding frustrated. I reach out and locate a perfectly normal light switch. “Ah…” I mutter, as the room is blasted with light and we discover that we’re in an old library setting with a bookshelf, desk, miniature grandfather clock, and stained maps of Basel on the wall. One problem of this game, I recognise, is the tendency to overthink it.

The second problem is that we’re rubbish. Our enthusiasm at the discovery of a new clue – hidden in a book, behind a photo frame, stuck under the desk- quickly turns into exasperation as we realise we are then required to solve it.The pressure, sadly, seems to cause Soph to develop a mild form of tourette’s, while I adopt my usual pub quiz guise: tutting to myself until a more knowledgeable team member says the answer and I can nod in a way that suggests I knew it all along.

In our case, the more knowledgeable team member is Game God. He’s great: giving just enough gentle hints to guide us through the riddles and tasks in a way that not only helps us discover a second – and then third – game room of different and equally fun themes, but also makes us almost think we can take some responsibility for our success. “So, that piece has a picture on it which you might have seen somewhere before… Have you tried pushing the bookcase…?” I definitely owe him a pint once this is over.

It’s not all calm, however. A ‘final fifteen minutes’ warning puts us both into a state of panic. Not because we think we’ll be trapped forever; it’s not escaped even our attention that hundreds of people haven’t been reported missing recently. It’s because we’re suffering from the first mistake of the day: we both really need to pee.

“It’ll take a miracle to make it out in time….” I hear my sister mutter. Of course, I think, realising the solution: “Game God – help?” Ignoring what I’m sure was a sigh, I decide that I really like GG – as I’ve now decided to nickname him – as he skilfully guides us through the remaining tasks. Heck, I’d even go as far as to call him a mate by the time he points us in the direction of a giant red button seven minutes later, which I graciously let Soph press. Ta da – a door we hadn’t even realised existed opens and we are free.

It’s been an exhilarating, hilarious, and very different way to spend an hour and eight minutes – as it actually clocked up – and we both can’t stop banging on about how much we’d love to do it again. Lucky then, that Haas and Erzinger already have plans to add a few new game zones to Basel’s Room Escape in the not too distant future.

“We’re both still amazed by how popular it’s been,” Haas tells me when we meet up later. “We’re constantly being asked when we’ll be extending it, so will definitely be putting our heads together and coming up with some new themes soon.” Unless one of those is ‘bathroom’, however, I think my sister and I are both in agreement that if there’s anything we’ve (re)learnt from this experience it is not to attempt it on four lattes. Oh, and to partner up with Game God next time, instead.

While in Switzerland, you have to take the chance to explore the Alps. Do so by booking a tour through tnttoursearch.com

In London this week: Femmes by the Thames