Forget about dodging bullets, Australian rugby legend Michael Lynagh’s doctor told him he’d done even better after he suffered a shock stroke a year ago. The former Wallabies captain’s recovery has been so remarkable that the surgeon told him he’d “dodged a cannonball”.

”I was trying to make sense of it all and asked, ‘Does this happen very often?’,” Lynagh tells TNT. “He said, ‘Not really.’ I said, ‘Why’s that?’ He said, ‘Because they die.’ That’s when he said, ‘You’ve not just dodged a bullet, you’ve dodged a bloody big cannon ball’.”

With that in mind, 75-Test veteran Lynagh considers himself bloody lucky to be here. So much so he wanted to give something to those who don’t escape a stroke so lightly. He’ll be running this year’s London Marathon on April 21, along with workmates from the Sky Sports rugby team, to raise money to help young stroke survivors back into the workforce.

“Since it happened, I wanted to get involved and help,” he says. “I’ve seen people who have had the same sort of stroke as me, but their lives have been changed substantially … [they’re] much more worse off than me.” 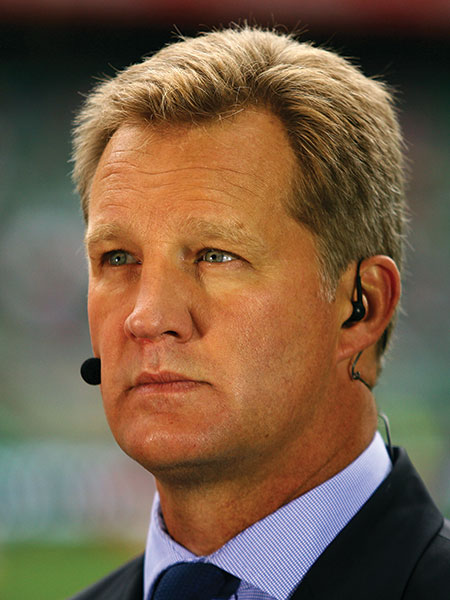 In April 2012, Lynagh was having a few beers with mates after playing golf. “I was having a drink and a laugh at the same time,” he recalls. “The drink went down the wrong way, which started a rather violent coughing fit.”This seemingly ordinary event split Lynagh’s back right artery, causing a clot and a stroke.

“The thing that caused the alarm was that I couldn’t see,” he says. “And then all sorts of headaches started happening. [What with] the stroke, the bleeding and all of that, I was very lucky it didn’t touch anything other than my sight.”

“It’s all my peripheral vision to the left,” he explains. “I’m getting used to it, but it gets a bit scary at airports and train stations. Or if there’s a glass on a table to the left I can knock it over [because I can’t see it].

”Lynagh, who played his final years for Saracens, admits he won’t break any records when he takes on the 42.195km course in a fortnight. His last attempt at a marathon in 2000, also in London, taught him it won’t be easy. That was just two years after he’d retired from rugby.

When he speaks to TNT, he’s just been to the physio to work on loosening up his 48-year-old calves. “Things are telling me not to do it, like my body, but I’m going OK and we’re going OK for the fundraising for a cause I’m now very passionate about,” he says. “Most people aren’t as lucky as me, so if I can help…” 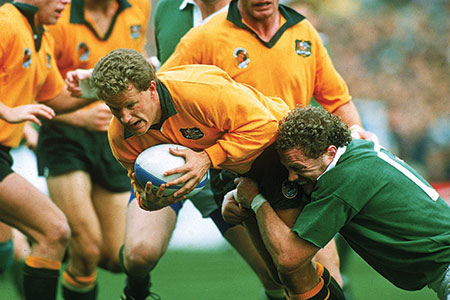 Lynagh’s inspiration to run the London Marathon this year came from seeing how many young people suffer from what happened to him, and from Sky commentator James Gemmell, who was planning on running the marathon for a friend who’d also suffered from a stroke. “In a moment of weakness I said, ‘I’ll do it with you’,” Lynagh says.

“We came up with this project with the Stroke Association, then a number of other people at Sky joined in, which is great.”And so Team Sky For Stroke was born to raise funds for the new Back To Work Programme.

“We’re not just giving money to Stroke, we’re employing people to start a new programme,” Lynagh says. “At the moment, they leave hospital and that’s it. But that’s the start of the battle.

“During the rehab you have problems with having a sense of self worth, finding a reason to get out of bed in the morning. Some people have trouble walking, talking, reading, writing – all the simple things we take for granted, they have to re-learn them all. “Being back in the workforce gives you that reason to get out of bed and be part of society again.”

There are no risks of hurting himself, Lynagh insists, saying “there’s no more risk of me having a stroke than last time”. 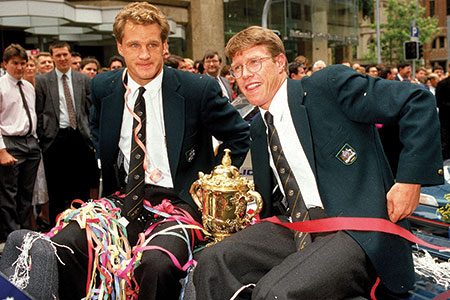 But if there was doubt, it’s been erased by an 18-year-old he met who’d had a stroke playing golf. “He was in a bad way,” Lynagh explains. “Sometimes there’s no rhyme or reason for it – even though there are danger signs such as being overweight or older, you can just be unlucky.”

He also insists being a former pro sportsman won’t help him in the race. “Rugby is short, sharp bursts, and lots of them, not going continuously for several hours,” he says.

“When I did the last one I’d just finished rugby, yet I had to totally retrain my body to be able to run for a long period of time.”Mental strength – an asset of Lynagh’s in pressure-cooker on-field situations – on the other hand, is very helpful.

“You need a lot of that when you’re coming down Canary Wharf, with just over half of the way to go and thinking oh god, how far now?

“Last time I remember I’d just come over Tower Bridge, which is about halfway, and it came over the loud speaker that the winner had crossed the line.“I also recall being passed by a palm tree and a wedding cake,” he adds. “It takes a lot of mental strength to keep going after that.”

More on the marathon at  virginlondonmarathon.com 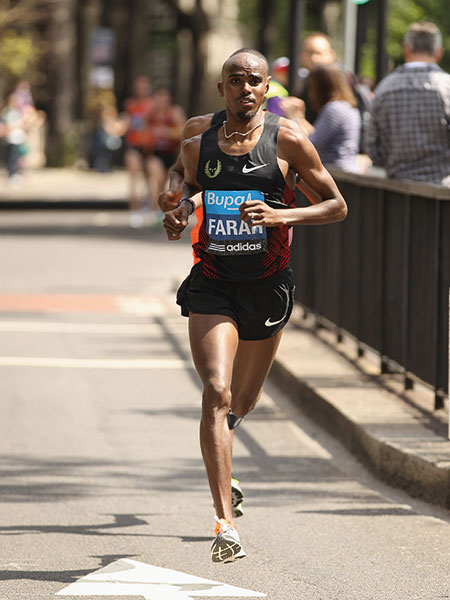 The London Marathon is the world’s largest, with 36,748 people finishing its 42.195km course last year, but one of them – the most famous – in this year’s 33rd running of the race is only going halfway.

But he’ll be pulling up short ahead of going the whole distance next year – it’s the first time the London Marathon’s allowed someone to enter with the intention of not finishing. Farah will be looking to break his own British half-marathon record set in New York.

A full marathon would be too taxing ahead of the world championships late this year, at which he has unfinished business – he lost the 10km in Daego by 0.29 seconds.

Portrait Of The Quintessential Tokyo-Urbanite Woman