Rugged and raw Panama: from extreme kayaking to 4×4 driving up a volcano and untouched paradise islands

A storm is a-coming, and if I let it, the current could swiftly coax me out into the open Caribbean Sea.

The Banana Canal – a suitably bendy backwater – leads out into the ocean through the protected archipelago of Bastimentos National Marine Park.

Comprising dozens of lush, virgin-white-sand islands, more than 52 cays and hundreds more islets, the region was a key player in Panama’s Banana Republic heyday, when vast quantities of bananas were exported to North America via these waterways in the 1890s.

The dozens of plantations that flank the network today are a reminder of the country’s former economic backbone.

For a while, though, the epicentre of Panama’s financial prowess has been the capital city, thanks to a canal of such engineering triumph that hundreds of thousands of tourists flock to marvel at the manmade locks that link the Pacific and Atlantic oceans over an incredible 50-mile stretch.

The creation of the canal in 1914 meant traders no longer had to sail all the way around the tip of South America to cross from one ocean to the other. Even so, after a day spent strolling the canal walkways and rollerblading paths feeling like a phoney shipping geek, I’m only too ready to swap the inescapable urbanism for something a touch prettier.

Fortunately, Panama’s northern archipelago is blessedly free from oil tankers and freight cargo carriers. It’s hard to believe that only 60 minutes north on a tiny 30-seater plane lies a simpler, more serene Panama, a place vibrating with hummingbirds, bats, natural caves and lagoons, and perhaps the occasional pink dolphin plopping about in the shallows.

Better still, it’s fast becoming a playground for kayak-loving gringos looking for some heart-raising paddle power, which explains why I’m here with a group of other travellers and our guides from wilderness lodge Tranquilo Bay. 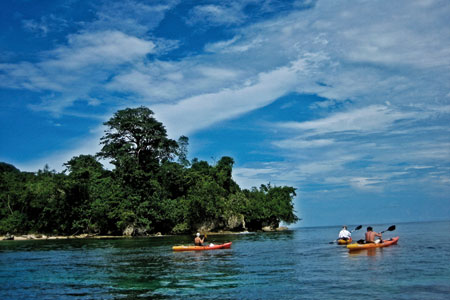 Back in my kayak, the threatening storm rolls down the Banana Canal and seems intent on taking me out in a tropical slamdunk.

I steady myself and speedily lodge my vessel in some reeds beneath a gnarly, bearded tree, which reminds me of a wise elder to keep me safe.

Inches from my face, an army of leaf-cutter ants balance emerald leaves as they march up the vines into the canopy above.

Their kamikaze efforts to keep calm and carry on in the storm are commendable; one thick, fat rain drop is enough to send them plummeting to a watery grave.

Between April and September, monsoon season in northern Panama brings with it plenty of these climatic curveballs.

One minute you can be reclining under the exquisite Caribbean blue sky, only to be shaken awake by apocalyptic lightning against Dante-esque clouds the next.

An upside to these extremities, however, is a splendid range of diverse geography and wildlife, something that’s criminally overlooked by those hotfooting it to the costlier, more crowded Costa Rica next door. 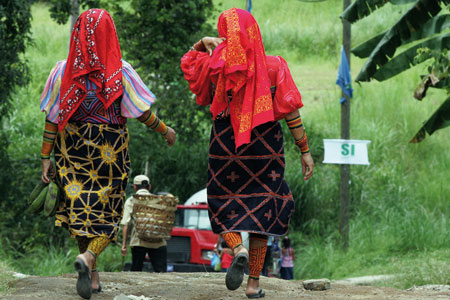 My Tranquilo Bay compadres catch up and we decide to stop wimping out, instead engaging our biceps against the six-mile fetch that’s surging towards us from an angry Caribbean Sea.

My embarrassing lack of upper-body strength means I’m wiped out in minutes; paddling against the current in sheet rain that’s the temperature of a bath is energy-sapping.

My left thigh cramps up and my yelp is lost amid the waves of thunder that bellow in the distance.

We persevere, plunging our paddles back into the water, shifting our weight in a bid to remain upright. Half a mile feels like five.

My fingers, arms and thighs ache more than any boot camp fitness regimen I can recall. I begin to wonder if a beach excursion wouldn’t have been simpler?

Then, from nowhere, an almost biblical shard of light bounces off the water – the storm is leaving. Birds wail in appreciation, while an olive-hued frog high-jumps on to the nose of my kayak: the first and only hitchhiker on the canal. 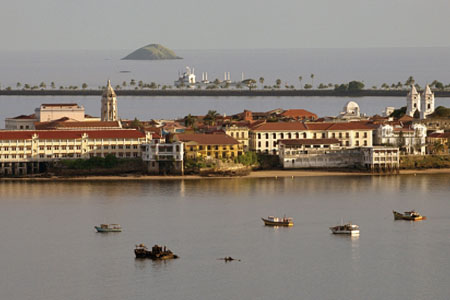 Flanking the azure reef, my group and I rev ourselvesup for another bicep bashing as we tackle the open waves that buffer us on our journey towards the unapologetically gorgeous two islands of Cayos Zapatilla, just east of the larger Bastimentos Island.

We gratefully run our kayaks aground and slide out on to gilded, untainted sands.

There’s not a sarong seller nor Coke can in sight.

After snorkeling in waters alive with swirling coloured fish and red coral clusters, we head back to the beach for a simple lunch of rice, beans, local fried green banana and the region’s signature spicy sauce.

The latter is an attack on the tastebuds, a piquant yellow pepper creation that locals use to cure anything from coldsores to sinus infections.

A plentiful supply of freshly fallen coconuts ensures my mouth doesn’t burn for long. I chug two in a row before I collapse on the sand, elated, exhausted and excited to find out what else this country’s got in store for me.

Some six hours and two bus rides away sits Boquete, a mountainous coffee town in the heart of the south-western Chririqui highlands on the doorstep of Costa Rica.

Geographically, it’s a world away from the lush, tropical archipelago of Bastiomentos, but this caffeine-scented community is a huge draw for adventure lovers, offering canopying, whitewater rafting, rock climbing, hot springs, volcano hiking and rainforest zipwires for a start.

But my appetite for adrenaline is truly piqued by a brand-new 4X4 Jeep excursion up Central America’s highest volcano, Volcán Barú.

It’s almost 12,000ft above sea level, with notoriously steep, unforgiving trekking trails, and you could argue a Jeep is the wimp’s way to the top.

Not so, according to local guide Stephen Dow, a longtime petrolhead who’s enhancing Boquete’s adventure scene with his customised Jeep tours (and a soon-to-launch high-speed go-kart park).

His tours are not for the faint of stomach, however – scaling enormous boulders and plunging down vertical ravines for three hours means you’re in for the ride of your life, but don’t expect it to be a comfortable one.

I’m scared shitless, but sign up anyway for a 3am pick up. 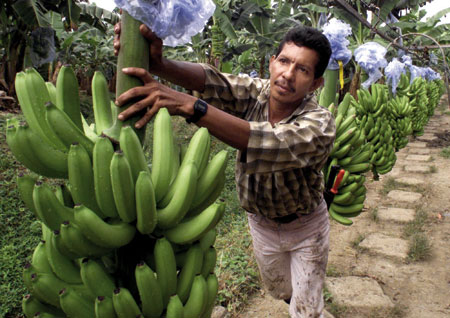 Bleary-eyed, two fearless insomniacs and I clamber into the Jeep in the freezing pre-dawn. Mist swirls through a sleeping, ghostly Boquete, but Stephen greets us like he’s just done a gym session.

He’s buzzing from local caffeine and takes us through the Jeep’s souped-up credentials: US$7000 on suspension from leading off-road company Skyjacker; a solid metal bar on the Jeep’s underbelly (“so the back half of the truck doesn’t get ripped off”); reinforced roll bars on the roof.

I’m momentarily reassured, until Stephen advises me to “keep your seatbelt off, this is a tactical adventure, not a speed-based one”. It does little to quell the mounting apprehension as we make our ascent.

A half-mile of pothole track is traversed smoothly – “this is nothing,” I smirk. Then the path ends. A sharp hairpin bend presents a wall of stacked boulders flanked by coniferous trees and a vertical drop.

I think of the metal roll bars on the roof and a clammy pool of sweat forms in my clenched palms. But Stephen’s in his element, putting the Jeep into second and revving the clutch so we lurch violently up the rocky route.

“I saw a gap in the market with this volcano,” the former racing driver casually explains, as we swing from side to side. “The hike up is hardly scenic.

So I thought, why not fastrack people to the summit with a bit of fun?” Why not indeed, I think, and congratulate myself on avoiding breakfast.

At 4.30am, we disembark 8000ft up at Volcán Barú’s finest lookout, popping our ears and drinking sweet, strong coffee while appreciating the sky’s rapidly reddening hues.

It’s a sign we need to crack on and tackle the mountain’s notorious tricky spots to make what promises to be a staggering sunrise.

At one point we hit a spot known as ‘Magnetic Hill’, where plentiful ions in the soil enable the Jeep to move upward while in neutral. Could adventure be any lazier? 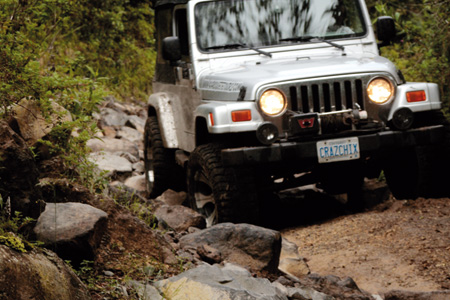 Two near death-falls and a failed clutch later, we’re at the summit. It’s 5.10am and sunrise’s beauty is obscured by the reality that up here, it’s staggeringly, unforgivably cold.

Swirls of freezing fog encase the top of the volcanoes, whipping around pylons responsible for powering the still slumbering Boquete that sits below us.

We clamber gingerly out of the Jeep, using a weather-battered outhouse for shelter against the freezing winds that whip off Baru.

I’m stubborn enough to ignore my purple fingers and the -10˚C windchill, in favour of the photogenic ocean of clouds that billow across the skyline in a shades of red and ochre.

Dawn, and the most apocalyptic vision I’ve seen in Central America. Yet again, I get to enjoy it with only three other people competing for the view.

That’s the thing that really gets me about Panama: for now, it’s a playground you can enjoy pretty much to yourself. 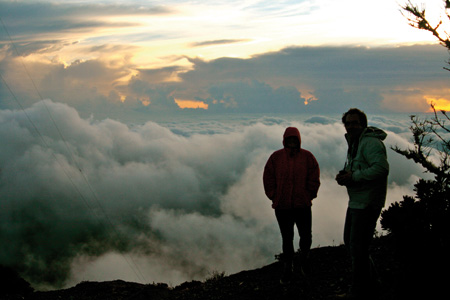 Best of the rest: Must-do Panama

The prinicipal town in the Bastimentos archipelago, Bocas del Toro has earned itself a reputation as a party island for gringos wanting to take advantage of lapse laws on drugs and dance parties.

But it’s also a great place to check out the region’s stellar seafood scene (where else can you eat lobster for £4?) and enjoy a pina colada, served up in a chilled coconut husk, while looking out over the Caribbean Sea.

About 2.4 miles north of David – Chiriqui Province’s capital city – is a stretch of waterfall-fed river said to bring health benefits thanks to the region’s mineral-rich tectonic soils.

It’s even been outfitted with a bar so you can quaff your way to good health in the medicinal waters.

Available as an overnight excursion or fun-packed six hours, this canal and city tour, hosted by convivial Captain Carl, takes you out of the capital to experience nature up close and personal.

You’ll cruise into Lake Gatun by tranquil houseboat and get plenty of chances to swim in natural waterfalls, spy some alligators and iguanas, and enjoy homemade culinary delights.