Running of the Bulls: Naked man flipped by bull – video

A naked man at Pamplona’s Running of the Bulls found himself on the receiving end of a bull’s terror and anger.

As the bull was taunted by onlookers in Pamplona’s bull-fighting stadium, a naked man appeared in the crowd.

San Fermin Running of the Bulls festival kicks off

Unluckily for him, the bull charged and the naked joker was thrown to the ground. The man did not suffer any serious injury but was bruised.

He was later arrested for causing a public disturbance.

Watch the naked man being flipped by the bull.

Spain's Running of the Bulls San Fermin festival came to a close at midnight last night.

The Running of the Bulls takes place over seven days, when bulls and steers charge through the streets to Pamplona’s bullring, where they are slaughtered by a matador at the end of the day. 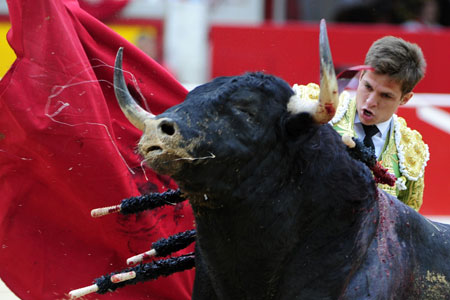 Several people were injured during this year’s Running of the Bulls. An Australian man was gored in his right thigh after he taunted a bull in the bullring. When the bull turned, he fell to the ground and was attacked. 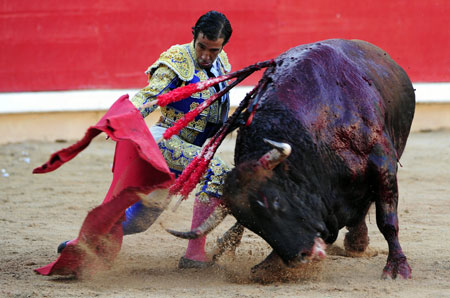 "People of Pamplona, the San Fermin festival is over. It has been spectacular, thanks to you it is the best festival in the world."

Pamplona’s running of the Bulls is increasingly controversial, with many feeling that the torture and killing of animals cannot be justified for “entertainment”.

PETA carry out an annual naked protest at the slaughter of the bulls. 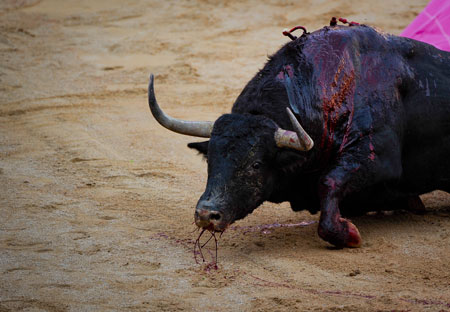