The massed ranks of men and women before me are dressed in purple and crimson robes and are drumming, chiming large bells and performing complex sequences of bows.

But then, it isn’t me they are welcoming to their feast, it is the ghosts of their royal ancestors.

The Jongmyo Daeje ceremony at Jongmyo Shrine in Seoul has been performed this same way for 500 years, every May, earning it a Unesco listing.

The hundreds of brightly robed royal descendants in the shrine’s courtyard switch to performing slow, solemn dances in lines to the sound of chanting.

Via the English commentary on my headset, I learn that the officials behind the performers are symbolically burning animal blood mixed with millet and pouring wine down a hole to the spirit chamber.

They then set out the feast itself on rows of golden tableware. 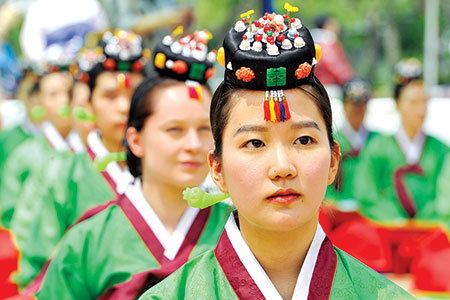 According to Confucianism, if suitably pleased with the spread, the spirits will grant blessings in return.

My guide Min tells me her family honours its own ancestors with simpler ceremonial meals at home.

“But what happens to the food?” I ask. “We believe they eat it,” she says.

My bemusement must show on my face because she adds: “We eat the meal after them; the spirits don’t exactly have teeth.”

When the Jongmyo ceremony ends, the participants retrieve mobile phones from the folds of their robes, relax and pose for pictures with peace-sign-flashing tourists.

This mix of ancient and modern typifies Seoul.

Hugely rebuilt after the Korean War, the capital now has skyscrapers and mega-malls cheek-by-jowl with ancient palaces.

The same young Seoulites dancing to K-pop likely follow time-honoured Confucian principles, such as respecting their elders and being sincere. 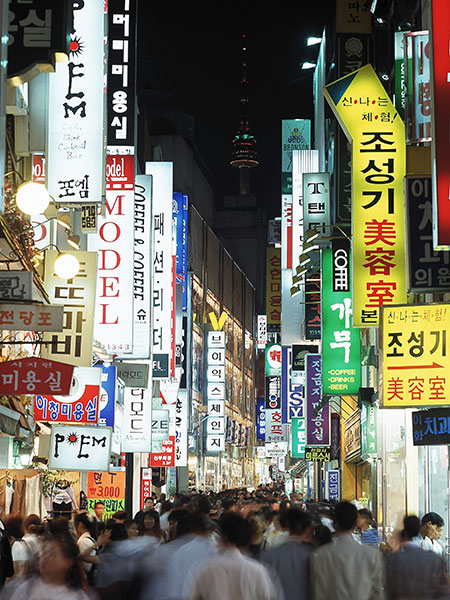 To get a feel for the heritage side of Seoul, at least one palace should be among first-timers’ sightseeing missions.

I choose the 15th-century Changdeokgung (entry about £3), which is famous for its ‘secret’ garden, built for scholarly reflection.

It’s the roofs that impress me most, however, with wooden eaves painted in reds and greens and tiles topped with gargoyles.

The unearthly visitors anticipated here are less benevolent than the ones at Jongmyo – giant water jars are placed around the complex to protect the wooden buildings from fire spirits.

The idea is not to quench the mythical evil-doers’ thirst but to hope they are scared off when they see their own reflections.

Between Changdeokgung and the other key royal palace of Gyeongbokgung sits the Bukchon heritage district.

This is a residential area filled with the traditional Hanok-style houses.

I pick up a map at the visitor centre and go for a wander.

Some of the dwellings date back to the 19th century and a few have been turned into craft shops and cafes. 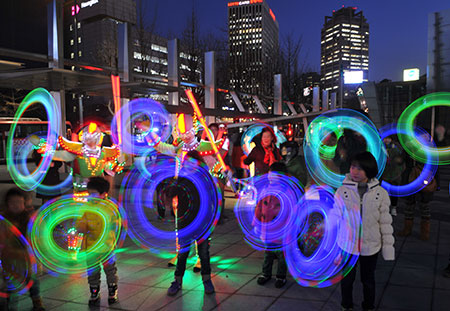 The National Museum (admission is free) is another heritage must-see with exhibits including bronze Buddhas and beautiful calligraphy.

My own favourite is a delicate gold crown ornamented with droplets of jade.Perhaps South Korea’s most famous historical attraction is the Demilitarized Zone, known by the much more snappy DMZ.

This wide strip of no-man’s-land on the ‘38th parallel’ about 80 miles from Seoul has separated North and South Korea since the Korean War ended in 1953.

In spite of its reassuring name, it’s actually the most heavily militarised border in the world.

I’ve heard that visitors tie prayers for unification to a barbed-wire-topped fence and that at festival time some bring meals here to feel closer to loved ones on the other side of the divide.

But in spite of the gestures of civilians, North and South Korean soldiers eyeball one another across the strip, fingers on triggers, tensions running high. I mean, this is serious stuff, right?

So it seems more than a little incongruous to find out that a visit here is not only considered a relaxing day out (tourdmz.com; from around £45), but it’s actually so touristy that you can pick up a box of DMZ souvenir chocolates and pose for photos with grinning South Korean soldiers. 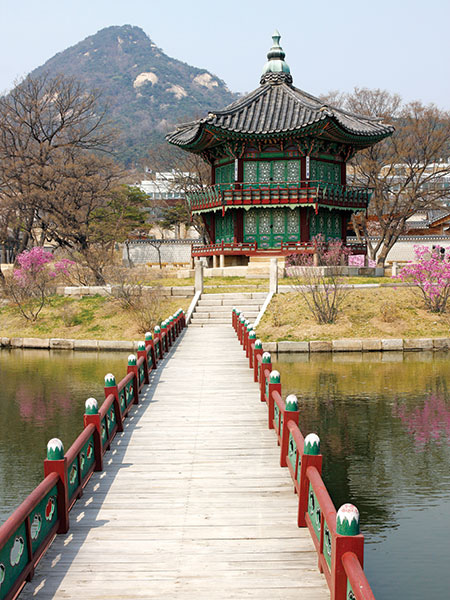 At a row of coin-operated telescopes I peep across land towards the notoriously sensitive, secretive neighbours.

The atmosphere is one of gentle curiosity, until someone steps over the clearly painted line where signs insist ‘No cameras’.

Ignoring the warnings, he prepares to take a snap of the North and, like lightning, the atmosphere changes.

A heavily armed soldier hurls a volley of furious Korean in his direction and, suddenly terrified, the tourist scuttles off, tail between his legs.

Perhaps it’s not that relaxed after all…

A highlight of the DMZ is the Third Tunnel of Aggression, one of a series of channels through which North Korea is believed to have tried to breach its neighbour’s border.

I don a hard hat and head down into the dark on what feels like the world’s most sedate ghost train.

I’m glad of my helmet as I bang my head on the low roof. 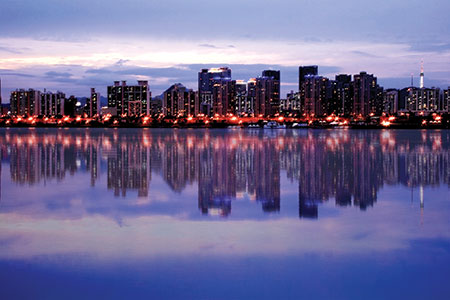 The tunnel looks like a mine shaft and guides are quick to point out the scrape marks that indicate the direction from which it was dug (North Korea denies the handiwork).

It is now filled in after a few metres, the only breach made by water, which bubbles up from an underground spring.

It’s clean enough to drink, so I crouch and grab a cold handful, thinking that’s probably the only taste of North Korea I’ll ever get.

Later that night I move onto something a little stronger when my city guide Young offers to take me out for a night on the lash – Seoul-style. We head to Itaewon, which is the city’s nightlife district.

The streets here are lined with a mix of bars, clubs and restaurants which get packed in the evenings with an international crowd: tourists, expats and South Koreans all come here to party.

We start off our session with a couple of glasses of Bokbunja ju, which is a raspberry wine. “It’s good for sexual stamina,” Young tells me with a wink.

Hmm. Sweet, fruity and dangerously potent, it’s actually so easy to drink, I think it’s more likely to leave your date slumped in front of their kimchi (South Korea’s food staple) than raring to go.

There are strict etiquette rules, Young says, on how to drink in South Korea: “Fill your companion’s glass for them using two hands, or one hand with the arm held at the elbow,” she tells me. 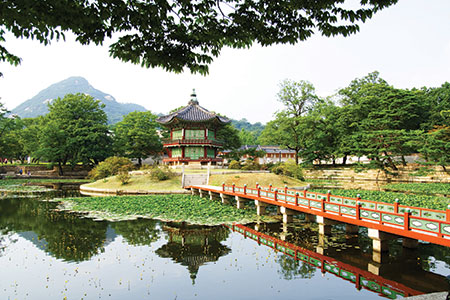 As the room starts to go a little fuzzy, Young starts telling me about the South Korean take on the Jägerbomb – with the local vodka-like soju sunk into a glass of lager (“The boys like it”).

As I slide out into the night in a raspberry haze I see a young crowd hanging out at the Cheonggyecheon Stream, a sunken, canal-like waterway lit by neon which bisects the capital.

Several malls and markets also stay open well into the night in this area, should you get the urge for some late night shopping or karaoke.

I’m definitely too far gone for either of these activities, so I take myself off to a show instead.

There are some great non-dialogue performances popular with tourists in Seoul.

Cookin’ Nanta is one, a surreal but hilarious show that mixes dance with traditional cookery, which became so successful it was even exported to New York a few years ago for a run on Broadway. 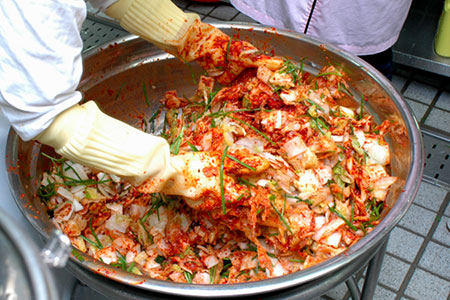 I’m thoroughly enjoying myself as a traditional love story is told, but the seat is comfy, the air warm and the Bokbunja ju is taking effect – inevitably I doze off.

Next thing I know, I’m jolted awake by a booming noise.

A hundred large drums have been wheeled onto the stage during my snooze and the musicians are pounding them like there’s no tomorrow.

One thing’s for sure – in Seoul, things definitely never stay quiet for very long.

Fly from London Heathrow to Seoul return with British Airways from £601.

When to go: Autumn, between September and November, is the best time to go as the weather is usually sunny and the monsoon season over.  Temperatures range from 15-20°C.

Accommodation: Get a taste of South Korean tradition in Tea Guesthouse, where overnight guests can sleep the traditional way, on a mattress on a heated wooden floor, from £42 per night.

They’ll even throw in free Korean tea and a dressing up session in traditional robes for you.

People Just Do Nothing