Siddle relishes role as leader of the pack

Mitchell Johnson’s radar was broken, Ryan Harris couldn’t stay fit, Ben Hilfenhaus looked underdone and Peter Siddle, despite a hat-trick on the first day of the series, lacked penetration. After England’s batsmen filled their boots en route to a thumping 3-1 series win, there was only one conclusion: Australia’s production line of pacemen had stalled, the cupboard was bare. There was nothing left but to gut the whole place and start from scratch.

Twelve months on, ahead of Australia’s three-match series against the West Indies – beginning Saturday – it is an entirely different story. A revitalised pace battery has propelled the side back on to the winners list and Siddle, as much as any of the incumbents, saw his stocks rise during the summer’s dramatic upswing – in December, Australia lost a Test to New Zealand but recovered to whitewash India 4-0.

“It was an important summer, especially when it began with a disappointing loss,” Siddle says. “We knew then that we really needed to turn it around and the result against India was probably better than we could have hoped for.”

Siddle, 27, has been Australia’s best-performed bowler during the past two years, enabling him to survive the Ashes post-mortems to lead the attack against India. Much has been made of the influence of Craig McDermott, the former Australian paceman who now coaches the country’s fast bowlers, whose instruction to bowl fuller lengths, maximising swing, has helped Siddle achieve greater control without curbing his natural aggression.

“It was a good coming-of-age,” Siddle says of his ascent to the role of spearhead. “There’s a lot of talk about what’s changed but I just think that, as a whole, we had a plan and we were more patient and consistent, which allowed us to build pressure. That’s what we did well as a group. 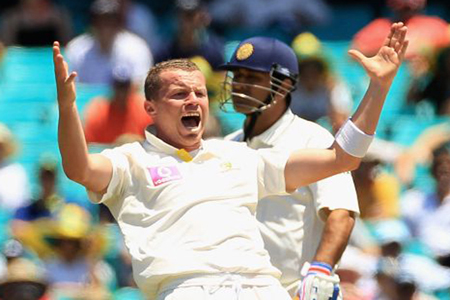 “At the start of the series, the Indian batsmen were looking to stamp their authority but we were patient and had them come at us. They didn’t seem like they wanted to dig in and then, after the first couple of Tests, they were chasing it.”

Siddle hasn’t done it all on his own, of course. Hilfenhaus was axed after the Ashes and spent a northern summer staring into the abyss, but was recalled against India and finished as the series’ leading wicket-taker, claiming 27 scalps to Siddle’s 23.

“After the Ashes, he was carrying a few injuries but he’s worked as hard as he could,” Siddle says. “He missed out on the tour to Sri Lanka last year, but he came in pretty fresh against India and showed that, now he’s been given that second chance, that he’s still got that delivery that straightens away from the batsmen. And his pace was up, which is why you saw that big turnaround.”

Siddle and Hilfenhaus finding their second winds may have been the key to Australia’s summer resurgence, but it has been the emergence of a cadre of young quicks that has done most to stimulate long-term optimism. Pat Cummins, 18, ripped through South Africa on debut in November, only to miss the summer with injury. But he was ably replaced by James Pattinson, who worked over the Kiwis and then India, before also succumbing to injury.

“Cummins – the way he went about it on his debut was amazing,” Siddle says of the new blood. “And then Patto came out and did similar things against India, against really experienced, quality batsmen, and he just stood up. If those two guys can stay on the park, they’re going to take a lot of wickets for Australia.”

Importantly, there are more where Cummins and Pattinson came from. Mitchell Starc, 21, made his Test debut against New Zealand and has been earmarked as a bolter. 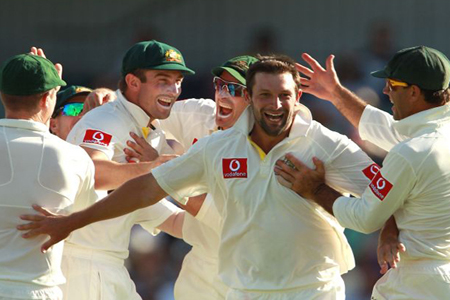 “Cummins and Pattinson are very quick but someone like Starc is different again,” Siddle says. “He’s a bit taller and gets a bit more bounce – he hasn’t really played a lot of Sheffield Shield cricket so there’s an expectation that he’ll improve dramatically.”

The list goes on: Alister McDermott – Craig’s 20-year-old son – was one of the break-out stars of the last domestic season, firing Queensland to the four-day title with seven wickets in the final. There’s James Faulkner, 21, a bowling all-rounder who led Tasmania’s attack alongside Jackson Bird, 25, who, in his rookie season, was the leading wicket-taker in the Sheffield Shield. If the production line appeared to have stalled after the Ashes, it has surely clicked back into gear, to the extent that there is now a logjam of young quicks, aged 25 and under, vying for spots.

“It refreshes the team and puts a little bit more pressure on me, having these guys snapping at my heels,” Siddle says. “But with me and Hilfy as the older bowlers and plenty of younger blokes coming through, it’s good times.”

There is, of course, the immediate matter of the West Indies – Australia have cause to be confident against an opposition that has won just two of its past 23 Test series, but Siddle is determined to maintain the momentum.

“It doesn’t matter who we play, we always want to be winning and we felt we really turned it around against India,” Siddle says. “We really want to get that consistency and show people that it was no fluke. But we’ll just continue on the way we played in the Australian summer and that will hopefully show the world we’re on the rise.”

Qantas to charge up to $180 extra for child-minding