An earthquake hit Spain last night, killing eight people and devastating buildings in Lorca, in the south of the country. It was the Spain’s worst quake for 50 years.

The magnitude 5.2 earthquake collapsed several buildings after striking at a depth of just 10km, 20km south-west of Alicante. It hit about two hours after a 4.4 magnitude tremor shook the city.

Eight people including one child were killed while a further 167 were injured including three in a serious condition in hospital, health officials reported. 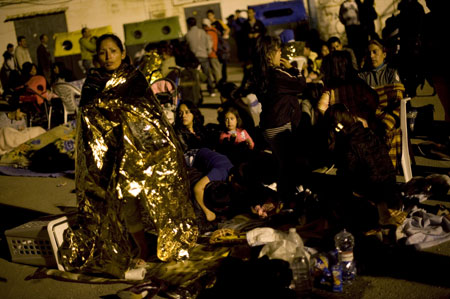 Residents wait in the street after a 5.2 magnitude earthquake hit Lorca, Spain.

Lorca’s residents and workers rushed out of buildings to gather in open spaces after the earthquake struck at 1847 (1647 GMT) in the town in Spain’s Murcia region.

About 10,000 people were evacuated from Lorca’s city-centre. Many people spent the night outside in an outdoor basketball court and children’s playground, fearing that Spain would be hit by another quake.

Spain’s Prime Minister Jose Luis Rodriguez Zapatero sent military emergency units to the region after being told of the disaster.

A total of 225 emergency military units were deployed to the quake zone along with 400 safety workers including rescuers with search dogs. 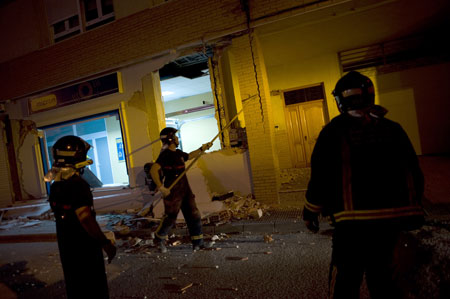 Police also sent in specialised trucks and helicopters to help search for survivors.

The Red Cross has brought in 24 ambulances and set up three field hospitals.

Yesterday’s earthquake was the deadliest in Spain since April 19, 1956 when a tremor killed 11 people in Albolote, a town in Granada.

Lorca and neighbouring Totana – which was also struck by the earthquake – lie in one of the most active seismic zones of the Iberian peninsula.

Dale Farm Travellers paid £53,000 in benefits by council trying to evict them