Sport opinion: Quit getting in a spin over rotation polity – it’s reality, and Lance Armstrong’s Admission means nothing

Buy a ticket to see the Australian cricket team and you expect to see these bangs for your buck: a wrong-handed six over mid-wicket from excitement machine David Warner; the dismantling of an attack in the middle overs by Michael Clarke; probably a hat-trick; and an Aussie win.

It’s not too much to ask, right? Wrong.Fans and commentators are in a tizz over the current Australian squad’s “rotation policy”.

An army of ex-players argue that resting players who are among the nation’s best 11 devalues the Baggy Green. But coach Mickey Arthur says – and I’m starting to agree with him – it’s “common sense”.

The fact is that modern cricketers play too much across three forms of the game and need a break.

If anything’s being devalued it’s the prestige of international cricket – other than playing in India, the Ashes and against world number ones South Africa, there are very few special match-ups to look forward to.

Clarke argues that his players now simply aren’t good enough to field if they’re at anything less than 100 per cent, arguing that if Warne, McGrath or Hayden back in the day were tired or had a niggle, they’d still be the best.

This is true, except in the case of Clarke himself, who’s been playing half fit with a dodgy back and carrying his team.

The best example of a player getting a controversial break was Mitchell Starc in the Boxing Day Test after he dominated in Hobart.

Here was a young bowler doing well and being denied a chance on one of sport’s iconic stages.

It’s now been revealed that he had painful spurs on his foot. Five (or three) days of cricket with those?

No chance. And Australia won the match in a doddle anyway.

Still, there’s no guarantee that a rest does the side any good. Clarke and Warner came back from a break on Friday and Oz got bowled out for 74 by Sri Lanka.

That’s not rotation failing, that’s cricket. And with cliché machine Alastair Cook saying of England, “rest and rotation is going to be an important part of the side moving forward”, it’s the new reality.

Agree or disagree? Does rotating players demean the game? letters@tntmagazine.com 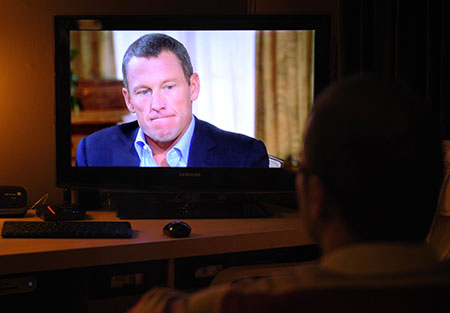 So Lance Armstrong admits to taking performance enhancing drugs – woop-di-freaking-doo! Thanks Captain Obvious for saying out loud what your silence and lies made perfectly clear.

It may have been something sports fans needed to hear, but it was a bit like the girl you’re into but know she doesn’t reciprocate telling you as much – you can move on then, sure, but it still feels shit.

Armstrong admitted to Oprah, hardly the insightful journo who could have really got to the crux of the matter, that he used drugs to win Tour de Frances and golds.

He also acknowledged he abused his position of great power in the sport. Fair play.

But saying drugs were required for a level playing field and crediting his cancer battle for his “win at all costs” mentality are cop outs.

Such justifications maintain his status as a lying, cheating bully with a god complex who ruined lives.

He should now be charged with perjury and have to give all the money he ever made back.

Class of the week – No. 1 Immortal Boot Camp