Sport view: Great knock Shane Watson – now do it when it actually matters

Cometh the time, cometh the man – the time was the fifth Test at the Oval last week when Australia was already 3-0 down in the series, on a flat, white pitch with England charitably offering up two sub-par debutants to bowl pies. The man was Shane Watson, who happily smacked said newbies to all parts and got 176.

To criticise a bloke after scoring 176 runs in a Test match against England is harsh, but may be fair, for when in a truly tough Test arena has Shane Watson stood up and said, “Don’t worry lads, I’ve got this”? His defenders will say his shuffling around the batting order like an afterthought has been destabilising and will point to big scores being around the corner, and fair enough, but we’ve had to wait, and when it came it was too late.

This was his third Test ton in 46 Tests – about right considering it took him 15 Tests to score his first one, 120 against a limp Pakistan at the MCG (dropped on 99). His previous one pre-Oval was a beauty, and one of the likely reasons selectors stick with him – Mohali, first Test against India, October 2011, he grinded out 126 from 338 balls as both sides got 400ish runs. The Aussies folded for 192 in the second innings though, and India chased it down with a wicket left. That was 47 innings and 24 Tests ago. Significantly, it was also 11 of his 20 Test half-centuries ago, a shocking conversion rate for an opener/ number three.

A look at the times when Bam-Bam look-alike Watto’s carved up with the bat is to see a flat-track bully, who mostly shines when the pressure’s off or the opponents are weak – 185 v Bangladesh in an ODI? Who cares? He dominated the last World Cup’s group stages, but no good in the final. Maybe this is why he’s so good at Twenty20.

Last week he smashed Simon Kerrigan’s long-hops and full-bungers. He should have been out LBW early and got dropped, but no big innings is without luck – his best aspect was a recovery after getting hit in the head. He smashed Somerset (90 from 94 balls) and Worcestershire (109 off 139), but a start and out LBW (four times) were the story of his Ashes.

He’s an asset, especially with his tight bowling, but he won’t win fans until he gets the timing right.

» Agree or disagree? Is Watto back in the good books? letters@tntmagazine.com 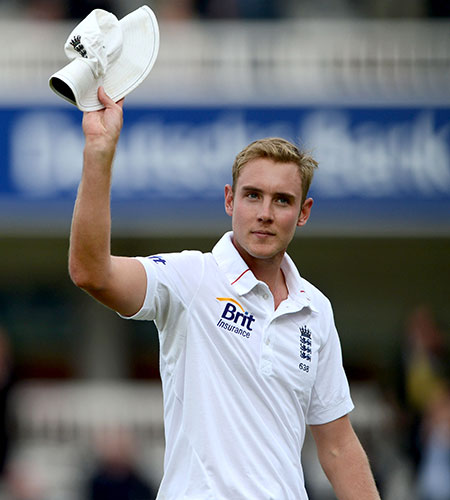 Player of the series: Broad

There are players who may be worthy of winning Ashes player of the series – Swann, Anderson, Harris, Bell – but as far as putting their mark on the five matches, no one beats Stuart Broad.

The only thing the plucky quick who bats a bit (I can’t call him an all-rounder) failed at is his desire to not be liked by Aussie fans. Well, proper ones who like cricket and appreciate a tough competitor when they see one sure like the cut of his jib.

All of the trash about him not walking and then walking should be forgotten – the only thing walking does these days is stop you from looking a bit silly. His 11 wickets at Durham was as good a few spells as we’ll see and secured the series win.

His combative attitude even led Darren Lehmann into comments – lighthearted silly ones on Aussie radio that they were – about him that led the Aussie coach to be fined. Influence on and off the pitch – he’ll be a hit Down Under too.