Everton boss Roberto Martinez was dead right when he called the Premier League transfer window “a footballing circus” last week after one too many questions about his two best players, Leighton Baines and Marouane Fellaini, being sold to their former manager David Moyes at Manchester United. (They’re not, apparently.)

I think our definitions about circuses are on opposite sides of the tight rope though. The former Wigan mentor is talking about dancing monkeys and clowns, maybe the occasional hand being bitten off by a lion. But for me, European football has put up a Big Top, invited in the speculation trapeze artists and reaped the column inches for every backflip and catch along the way.

Will Gareth Bale or won’t he? When will he? For how much? He’s not at training? Holy shit! Will they fine him? He deserves to be fined for wearing a pink T-shirt and a hat backwards! Or is he just trying to fit into the trendy Madrid crowd? What will he do with all of that money Arsene Wenger, who presumably scours dollar shops to find something with a lifetime guarantee, says the Welshman isn’t worth?

Martinez said the transfer window going two-and-a-bit weeks into the start of the EPL season “is not helping anyone”. Roberto knows football, PR not so much. When absolutely nothing was happening in the off-season, the reports of who was going where for how much didn’t stop. After the start of the season speculation stories and yarns about who will be first sacked in the first couple of weeks, we have the transfer window closing.

Sky Sports’ Natalie Sawyer, who co-presents an election-like coverage of the final day of trading on Monday with Jim White, told Metro on Friday there are some who think the day should be a bank holiday – Sky certainly would – and “lots of people take the day off work to stay tuned”. Sad for them, but it highlights how much attention is given to and gleefully received by punters for what is agents and suits doing backroom deals. Genius.

Agree or disagree? Is the transfer window distracting or entertaining? letters@tntmagazine.com 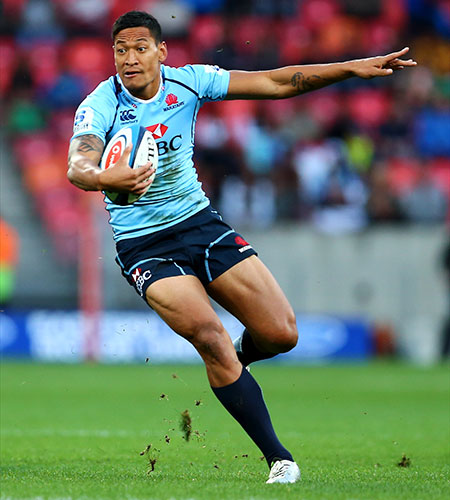 Israel Folau was triumphantly wheeled out by the Australian Rugby Union last week after signing to the code for two more years. Isn’t that great? It’s OK.

I tipped on this page that Folau’s time in the 15-a-side code was limited, and even though my prediction of 2014 was wrong (not that a pesky contract ever stops these blokes from doing what they want), it was really only made for effect.

The fact is, Izzy likes the look of rugby union for now. He’s done pretty well on the wing against the Lions – especially in attack. It was an impressive debut really.  Now he’s eyeing off a move to fullback under Ewen McKenzie’s leadership, with a view to playing a key role and developing his brand (I mean, doing his part for the team) on an international stage at the World Cup in 2015 in England and Wales.

It’s a good thing for rugby, right now, but hard not to assume he’s setting himself up for a big money move to Europe.