Student protests in London have once more erupted into violence as police clash with the thousands who have come to march against the rise in tuition fees.

In Parliament Square, metal barricades have been torn down while flares, paint bombs and missiles are thrown towards police.

According to Sky News, two police officers have been hurt and serious disorder is breaking out, causing a “dangerous volatile situation.”

Students are protesting about the proposed hike in tuition fees which could bring the price of a year at Uni up to £9,000.

Tens of thousands of students from across the UK were expected to demonstrate today, according to the National Union of Students (NUS), with most marching towards Westminster, where the controversial tuition fee rises are currently being debated. 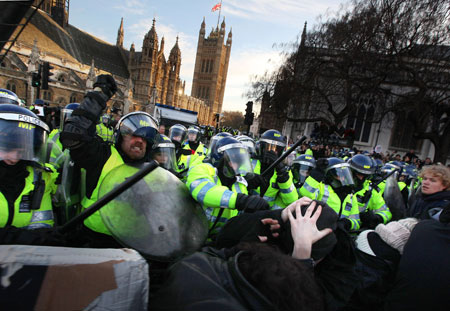 Protestors are apparently being contained, or “kettled”, by police, a technique which was criticised during the last demonstrations. A student told CNN: “We’re kettled, we’re freezing, everyone needs the toilet, but we’re having fun.”

According to police, only a small element of today’s demonstrations is setting out to cause trouble.

A former Met Police public order officer told Sky News: “It’s just one small minority on this corner of Parliament Square who want to turn this into a violent confrontation with the police.

“You have almost got two distinct protests going on which becomes difficult to manage.”

Mbeki’s future in the balance