The Australian is again the world’s fastest man over the blue riband distance, defending his title from Shanghai four years ago in a time of 47.71 seconds.

Magnussen, 22, described the win as “really emotional” and said he used the “pretty terrible” events of the past year, including his being part of a “toxic” team environment, as inspiration.

“It was really emotional,” Magnussen said.”That last 15 metres, I really used the last 12 months of experiences that I’ve gone through.” Magnussen flew from fifth to snatch a narrow victory on the wall.

“I was really aggressive towards the wall and I’m just stoked that I got there,” he said.

“I’ve put the last 12 months behind me now and I consider that race the start of my preparations for Rio.” 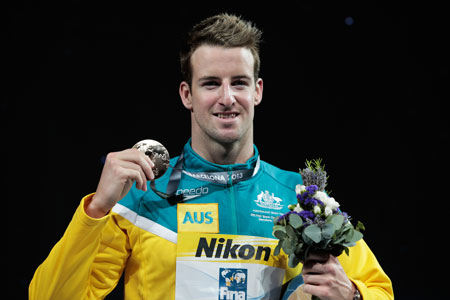 Australia also won its sixth silver medal of the campaign in the women’s 4x200m freestyle relay With a huge personal best, Aussie teenager Cameron McEvoy (47.88) finished just out of the medals in fourth. Tonight, Australia’s Cate Campbell has qualified fastest in the women’s 100m final.