With that in mind I packed myself, my other half and far too much food into our campervan. With happy faces, and choons turned up to the max, we were Byron bound.

But if we were going to be genuine travellers we needed to get off the beaten track, to see the road less travelled. The New South Wales coast glitters with hidden gems, but too many people miss their beauty, in the rush to get to Sydney or Byron Bay, eager to tick the next biggie off their “must-do” list.

You’d be forgiven for thinking you had turned on to a different planet when manoeuvring along the twisty roads through the bush to Seal Rocks, just three hours north of Sydney.

The combination of red dust and a wicked bend every four seconds, makes for a somewhat interesting ride.

However, once the haze clears and the ocean is in view, you are just a few miles from heaven. What stretched out before us at Seal Rocks, is one of those perfect scenes that belongs on a postcard. The sand is white, the sea turquoise and it is not unusual to see a school of dolphins frolicking in the waves.

Apart from the unmistakable beauty, the main difference between this beach and those in Sydney or Byron, is that you can actually see the sand rather than a sweaty human blanket.

It is Friday afternoon and there is no more than 10 people here, sharing in the beauty of this well-kept secret. 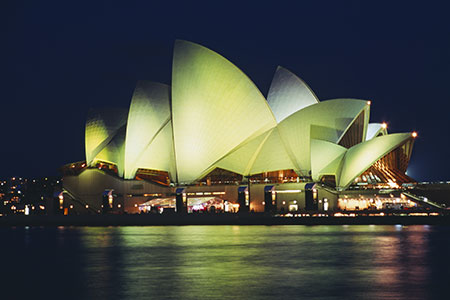 My partner in crime had to tear me away from this nirvana, for another jaunt along the coast to the town of Forster, where we had a beautiful lunch by the sea (who says Subway can’t be romantic?).

We decided that Port Macquarie would be our home for the night and we parked up just in time for a walk along the sea as the sun was setting.

The sky was a clash of amber and red and was truly beautiful. All that was missing from this perfect picture was alcohol, so we wandered into a local bar.

The hours rolled on and later we rolled out, a little worse for wear. Trying to set up the bed in that state is not something I would recommend (we used the wrong pieces of wood and the middle caved in during the night).

The next morning, after a bit of gentle persuasion I managed to convince “the boss” to let me drive for a bit.

Although I thought I did a brilliant job cruising the highway, after a two hour stint my partner’s nerves got the better of him and I was banished back to the passenger’s seat.

I sighed that I would sacrifice the drive for the good of our relationship. But really I just wanted to see how many “Big Things” I could photograph en route. The Big Banana in Coffs Harbour being my personal favourite.

Our destination was Lake Ainsworth Caravan Park in Lennox Head, about 15km from Byron Bay. For me Lennox Head is the brightest star on the beautiful Walk of Fame between Ballina and Byron Bay.

On one side is the beautiful lake; across the road is Seven Mile Beach. Lennox Head is a chic little town dotted with fantastic restaurants and appealing boutiques and the locals are fiercely proud of where they live.

I have been looking for a decent Italiano in Sydney for some time now, but in Lennox Head I found Quattro, the best Italian I have tasted since coming to Oz. 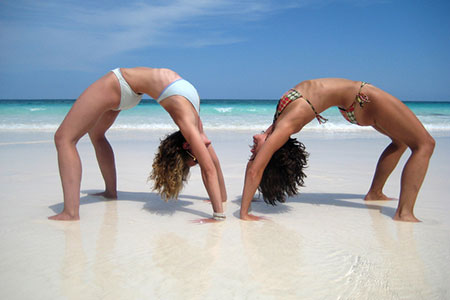 Next up, we took a Bay to Bush photography tour with Sue McLeod who brought us to see some of the most spectacular beaches and hill-top views that you are ever likely to see in Australia.

This really was the highlight of the trip for me. By showing us how to use our digital cameras properly, Sue coached us into getting some awesome pictures. Now I officially have the most jealousy-inspiring Facebook page.

We also did a surf lesson. Did we both manage to stand up? Of course. In fact our instructor Terry said he would take it as a personal insult if he didn’t have us standing before your first lesson was out.

Byron Bay itself is a hippie heaven. We were lucky enough to get a mooch around the famous Byron market (first Sunday of the month) which is filled with art, crafts, tarot card readers, vegetarian food… anything goes here.

At night time Byron’s bars are filled with schoolies and backpackers making the most of what this brilliant little town has to offer. The streets are filled with enough characters to keep you amused as the night goes on.

When it came to giving up the campervan in Ballina, it felt like losing an arm when
I had to give it back. You really do become attached to your little home on wheels.

I was genuinely sad that the adventure was over, but I vowed that this would not definitely be the end of my roadtrippin’. 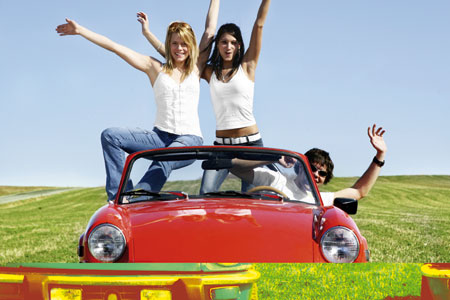 1. Relocation, relocation, relocation
The cheapest way to travel around Oz is by relocations. A relocation is when a rental company has a van stuck in, say, Perth and needs it in Sydney, so they’ll let you drive it there for as little as $1/day. There is however usually a time limit and it’s pot luck whether their needs suit your plans. But you could strike lucky. (Remember that for normal rentals, the longer you rent the cheaper it becomes.)

2. Does size matter?
Small manual diesel cars are popular in Europe because taxes on larger cars are high. In Oz there’s no significant tax difference between four cylinder and six cylinder cars, so don’t feel you should try and avoid them (they may be large enough for you to sleep in).

3. Weight a minute
Fuel is approximately half the price it is in Europe (and usually cheaper mid-week), but don’t waste the savings. The less weight you carry on board, and the slower you drive, the less gas you’re guzzling. So fling out those Asian guidebooks, that hitchhiker and the testosterone-fuelled Lewis Hamilton-wannabe. Ensuring the tyres are at the recommended pressure, accelerating slowly, using cruise control and putting the gears in neutral at lights and in traffic jams will also save the good stuff.

4. Night rider
Hitting a kangaroo will almost inevitably damage your vehicle and therefore your wallet (not to mention their poor bouncy thing). The best way to avoid this scenario is not to drive at night, or dusk/dawn, in rural areas. You’re also more prone to hitting ‘roos where the bush comes close to the roadway and on overcast and cloudy days.

5. Let’s off-road!
There is some incredible, scenic off-road driving in Australia. But you must be careful – people perish in the Outback. Not all unsealed roads require a 4WD vehicle, but you should always have plenty of water, and think about carrying a tow rope, communications equipment (mobiles often won’t get reception, so consider a high-frequency radio or Emergency Position-Indicating Radio Beacon (ERIPB)).

Be aware that the wet season (October till April) means road closures and/or potential trouble on isolated roads in northern Oz. Seek local advice – and tell someone your plans. If you break down, stay with your vehicle – it’s easier to spot. Set fire to your spare tyre to attract attention.