It’s in the ‘fit box’ where the first pangs of anxiety stab me, needles of panic piercing my confidence and allowing the first sour taste of self-doubt to seep in. I’m a slim guy, but it’s a tight fit, a suffocating experience even for someone for whom ‘claustrophobia ‘is a foreign word.

I crawl my way forward, and, thankfully, the narrow corridor offers a respite, opening up just enough to allow me room to stoop. I muddle on, navigating a couple of swinging ropes as I reach another hands-and-knees cavern. I can see the light, but escape doesn’t come easily. I thrust my head through the exit and have to drag my legs through – doing my best not to bang my spine on the box’s lip – and then, only then, am I able to relax in an undignified heap on the floor of Waitomo’s Legendary Black Water Rafting Co.

It’s not so much the thought of the confined spaces that’s got me going, it’s those spaces combined with the collection of “mind-blowing” heights promised by the company’s latest adventure: The Black Odyssey. 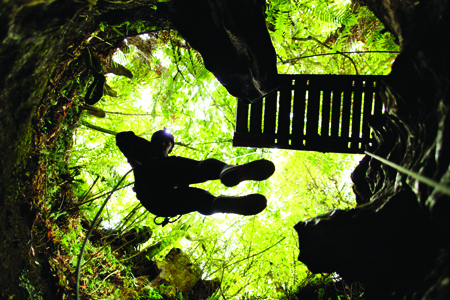 The fit box is designed to weed out those likely to undergo a massive freak-out in the deep, dank Ruakuri Cave, requiring them to be floated out the cave’s dark Huhunui River, while everyone else waits for the guide to return. Despite my reservations, I’ve cut the mustard, and as chief instructor Angus Stubbs explains, my reaction is exactly the type he likes to see.

“This isn’t about something that’s easy,” he tells me, wearing an almost maniacal grin. “It’s about that challenge, that anticipation. Those butterflies in your stomach right now – that’s exactly what we want people to feel.”

Previously, thrill-seekers arriving in Waitomo could attempt to conquer the five-hour Black Abyss: a journey involving scaling waterfalls, whizzing along a flying fox and abseiling in Waitomo’s main attraction, Ruakuri; or they could take on the Black Labyrinth: three hours’-worth of tubing and scrambling through the black waters inside the cave.

Now, after repeated requests for something more, Stubbs and his team have taken things to the next level, spending two years creating the fearsome Black Odyssey, billed as an extreme, dry, technical caving experience. I just hope I can handle it.

As we enter Ruakuri through two massive doors, and then stamp our way down a seemingly never-ending spiral staircase, the feeling is a descent into the underworld. The smallest sound produces an echo and the knowledge that an ancient Maori burial ground is nearby provides a chilling atmosphere.

The butterflies in my stomach have not yet settled, but soon guides Drew (a chirpy Canadian) and Jed (a super-chilled Kiwi) are taking us through a practice run, teaching us how to use our carabiner clips, to make sure we have at least two at a time are always attached to the ropes snaking throughout the cave system.

“You’d have to do something very, very stupid to actually fall. You’d probably have to want to fall,” Drew says. “Let’s hope no one wants to.” We get taught to fight our instincts and lean back on the ropes, relying on our metal clips. It works. We’re also reminded of the buddy system (looking out for our appointed partner at all times) before we squeeze into a crevice and make an ascent along what really just seems to be just a minute crack in a massive limestone slab. 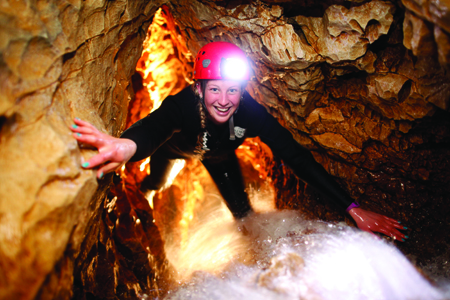 I creep gingerly onto a tiny ledge and begin the painstaking task of attaching and unlatching my three carabiners as I shuffle along in my gumboots, part of a slow army of human spider-walkers, silent except for the clacking of the clips and Drew’s ever-enthusiastic cheer leading. At some places in the cave there doesn’t even seem to be a ledge, and I peer into the shadowy stone in search of a foothold. There’s always one to be found, though; it’s amazing how resourceful you can be when you’re miles underground, living only on your wits and the strength of your rope.

The buddy system works well, as my pal for the day, ‘Scuba’ Steve, notices one of my carabiners not attached properly. Phew. I’ve wisely positioned myself at the back of the group, to a) use the others as guinea pigs and imitate (or not) how they tackle each rocky (or slippery or crumbly) obstacle and b) to allow my thumping heart time to calm down before I continue the technical trail along the ledge. I allow myself an occasional  glance down, but at this height (or depth –orientation has long abandoned me), a vast, black nothingness swallows everything it touches.

Soon, however, I’m into my stride, my fingers nimbly working the safety and my feet experimenting with just how fast they can travel as my legs learn to stretch as far as possible. Hell, I’m even leaning back (although just quickly). But confidence can be a killer, and Scuba notices another carabiner mistake, dutifully pointing it out and making sure I remember to stay alert.

And then just when I’m getting comfortable again, I’m invited to drop down into a dark hole using only a rope to break my fall. I can’t remember the last time I abseiled but, somehow, the dark makes it that little bit easier. And when my feet touch the ground after a 7m skid down a thin rope, I feel a strong pang of satisfaction that I’m through phase one of this beautiful nightmare.

We’re closer to the water now and the yells and whoops of those who have decided to enjoy a wet adventure come up from below us. We turn our headlights off so as not to ruin their cruise through the dark (although I do feel like yelling ‘you should have done this one’), before snaking along another ledge and coming to rest in a flat, solid piece of ground. It’s been well over an hour since I entered this underground chamber – long enough to have worked up an appetite. Drew and Jed hand out perhaps chunkiest, chewiest Anzac biscuits I’m ever likely to see – great sustenance for what I’m promised is going to be a full-on phase two.

Somehow, I’ve foolishly found my way to the front and after a 20m crawl along the next ledge, I find myself being hooked to something by Jed, who warns me: “whatever you do, don’t kick against the wall.” Wall? What wall. I can hardly see a thing. 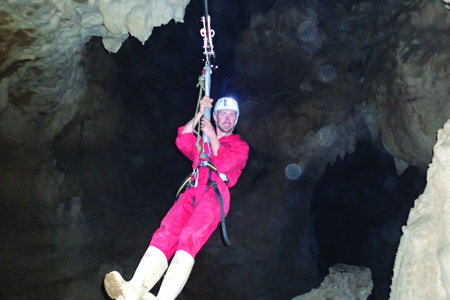 “Ok, hold on”, he warns as he pushes me out into the darkness. I cling to the rope for dear life and, through the use of echo (my low-pitched pleading, perhaps?) deduce a wall is quickly coming up. I’m convinced I’m going to smash face-first into it – Wiley Coyote-style – but miraculously find myself travelling in an arc towards the same side I launched off, albeit far further on. It turns out that, just like in an Indiana Jones movie, the rope swing is the only way to continue.

From then on everything seems a lot more fun: I mean who doesn’t love a flying fox? And who doesn’t love two of them – especially underground? I shoot through the darkness, the whirr of the mechanics above my head making a pleasant change from the heaving breathing and grunting of my fellow cavers – and the rush of air providing a small respite from the stuffiness of the cave system.

But then Ruakuri throws up another challenge: a ladder. No, not one leaned against a wall, but one stretched out across an abyss. The guides tell tales of their colleagues who can walk over it using no hands. Stuff that. My sweaty palms grip firmly at the guide wire. There’s some spring to this ladder and it’s resting on a slight incline. I can hear the Huhunui rumbling hungry below as I give up the safety and security of the limestone ledge and wobble my way on to the first rung … and then the second.

I bounce my way over it as sure-footed as a new-born foal, my tired legs bending like plasticine as my hands almost drag me across via the wire. My mouth is dry and my heart thumps in my ears. My gumboots, wet from a muddy patch further back, squeak and slip, teasing they’ll send me skidding any second.  I have to use every iota of my balance and I’m sure I find a new strength in the process. When I finally set foot back on solid ground, the relief is phenomenal. Until I see the next obstacle: another bloody ladder. 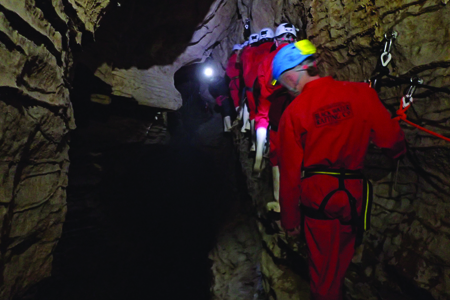 With that and a seemingly untameable wire bridge (plus another two-and-a-half hours of alternating bursts of clinging on for dear life and death-defying climbing manoeuvres) conquered, we reach an almighty door, one that wouldn’t look out of place on a Middle Earth bush palace. It’s the way out, and as we stumble towards the exit, huge weta lazily walk up the walls. The large cricket-like insects may look unfriendly, but the butterflies I’ve dealt with today have been far more intimidating.

I firmly grip one last rope and descend the day’s final rock face, welcomed by the warmth and security of the Waitomo daylight. Only then can I reflect on my journey. It’s not every day we’re taken out of our comfort zone and placed in an alien environment.

You learn things about yourself in a place like Ruakuri. Fears are conquered; new strength is discovered; and you learn that even in the darkness your determination can light a path for you. And as I remember, Stubbs’ words ring in my ears: “We want you to feel those butterflies …This isn’t about something that’s easy.”

Damn straight, Angus – and you’ve named your experience perfectly: that wasn’t just an adventure, that truly was an odyssey.

Damage & Details: The Black Odyssey takes at least four hours and all equipment is provided. Tours depart twice daily (9am and 2pm) and cost $175

What Fuels the Popularity of Paid Citizenship?