A teenager was buried alive in sand on a California beach, but miraculously survived, breathing from a small air pocket, until rescuers dug him out 30 minutes later.

Matt Mina, 17, had been digging a tunnel in the sand on Newport Beach, California, when it collapsed and he found himself buried alive.

The teenager was buried seven feet underground when the sand tunnel collapsed and believed he would die as his cries for help would not be heard.

On onlooker filmed this footage of Mina being rescued from the sand:

When a family member alerted others on the beach, up to 40 people gathered round with spades and shovels, desperately trying to dig Mina from the sand.

However sand kept pouring back into the hole, leaving the teenager trapped. 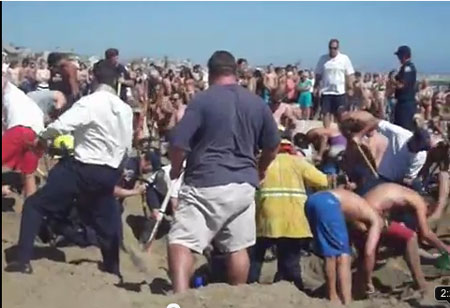 Firefighters and paramedics soon arrived on the scene and managed to drag him out as the crowd on the beach cheered.

Mina was dragged from the sand unconscious but has made a rapid recovery at Hoag Hospital in Orange County.

The teenager said he only managed to stay alive by moving his head from side to side to create an air bubble. 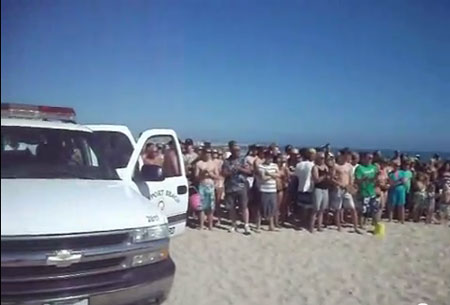 Speaking to msnbc he said: “I was just really scared. I didn't know if anyone could hear me when I screamed for help.

“Once you're six feet under you can't hear anything. I threw my head around to try make some room because my arms were behind me.

“I was just really scared. I didn't know if anyone could hear me when I screamed for help… Once you're six feet under you can't hear anything.” 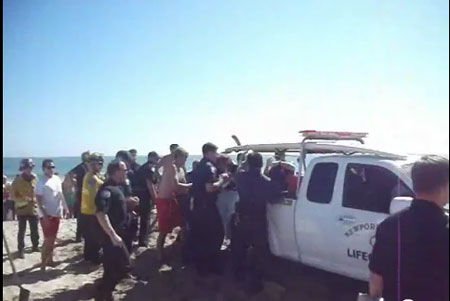 Mina was taken to hospital after his ordeal

“I was falling in and out [of consciousness]. I thought I was going to die.”

A Newport Beach resident who witnessed the incident told the Orange County Register: “Everybody was thinking, ‘They're going to pull up a dead body.’”